Ashton: You are SO busted, Pierre. What are you doing to my rooster? That was for my chicken emporium! 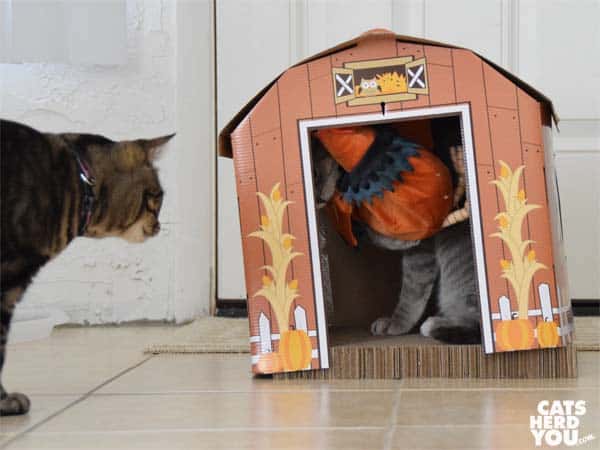 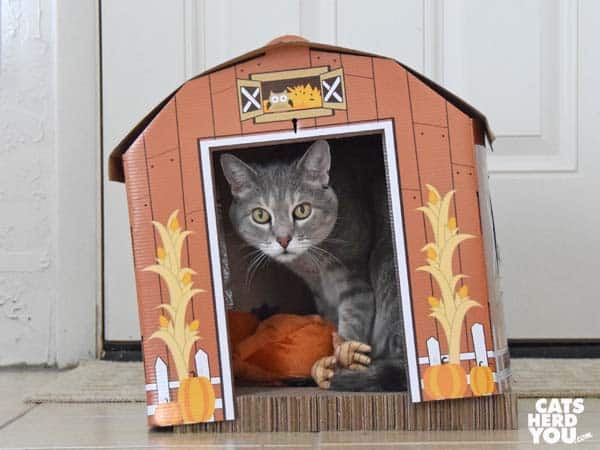 Pierre: There was an earthquake. Newton saw it, so he will be able to be a witness. It was so hard it made me fall down, and it knocked the barn right off its foundation! And it killed the rooster, too. 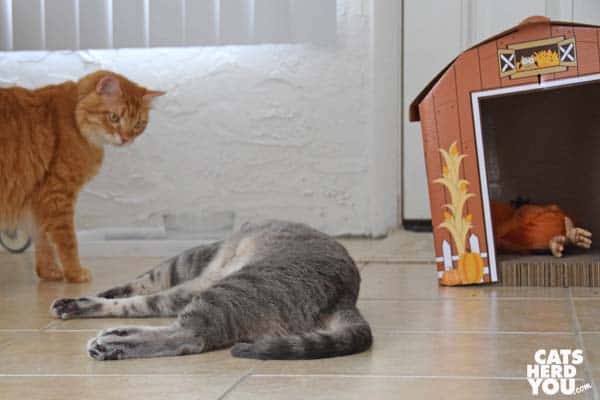 Pierre: Really, that’s what happened to your rooster. 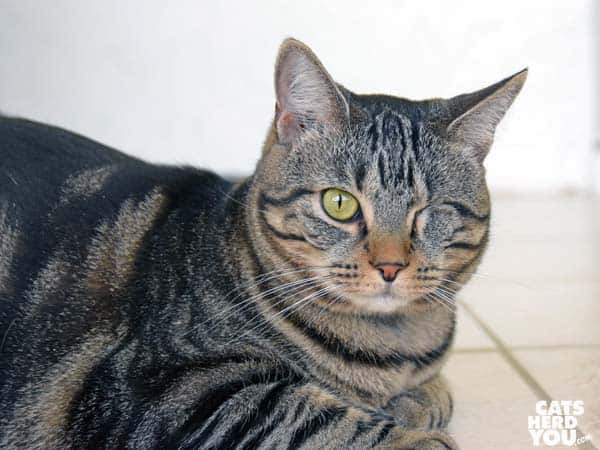 Ashton: What do you think, should I believe his story?

Pierre: I made Newton leave the rooster in the barn. He’s all mine now! 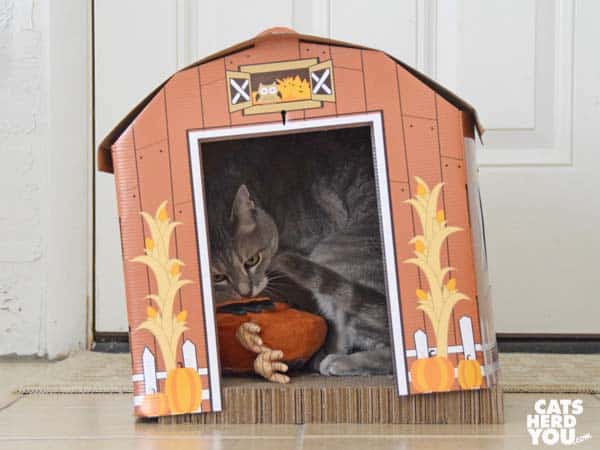 Newton: What are you doing to that chicken?

Pierre: It’s a rooster. And could you just look the other way for a few minutes? 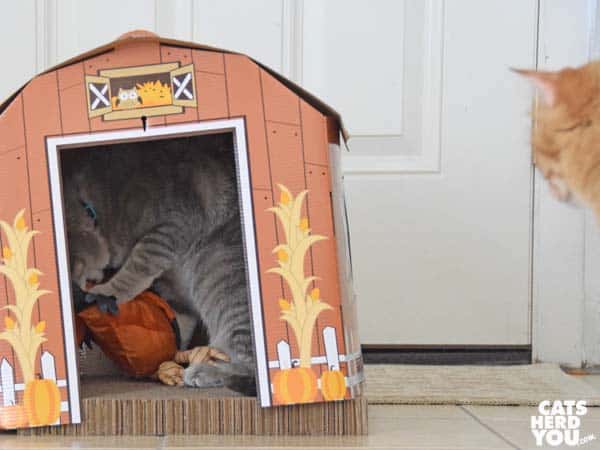 Newton: Are you KISSING that chicken?

Pierre: It’s a rooster, and no. Besides, I told you to look the other way. 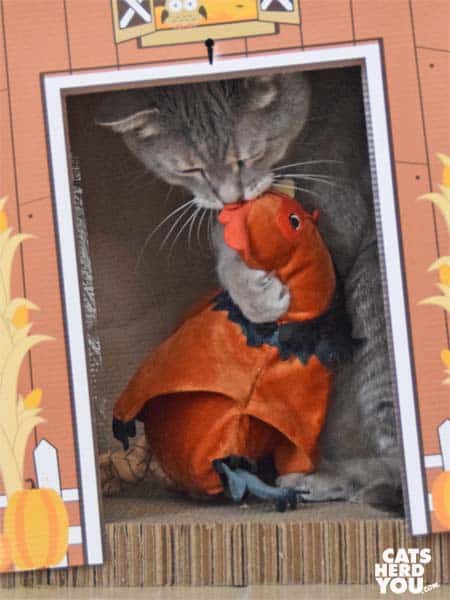 Newton: Do you think the chicken tastes funny? 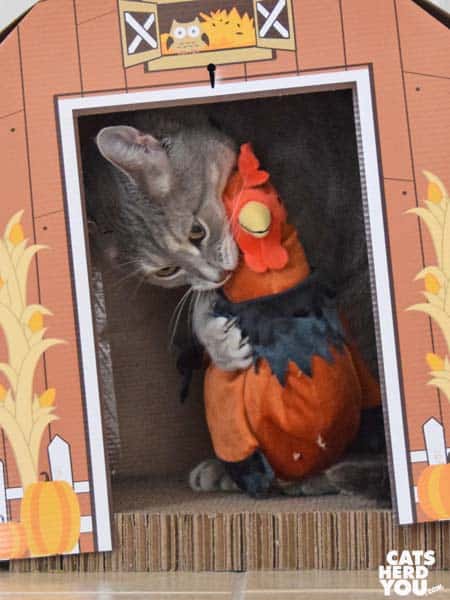 Pierre: * SIGH * You really know how to take the fun out of things, Newton. No, I think the rooster tastes just fine. 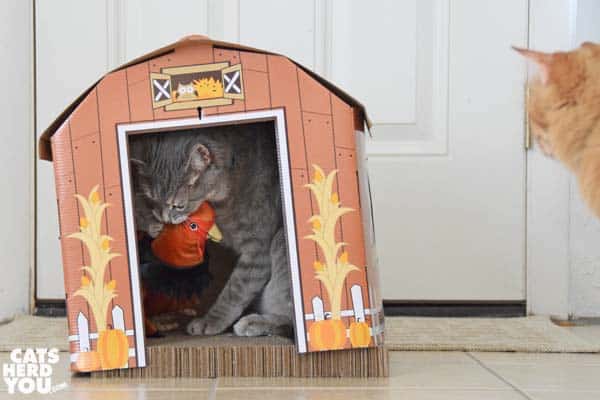 Newton: You look like you’re getting a little carried away.

Pierre: If you don’t shut up, I’ll carry you away. 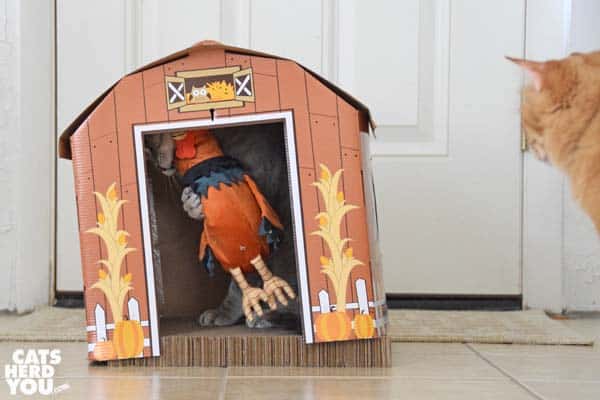 Ashton: Do I hear eating noises? There had better not be someone eating and not sharing with me! 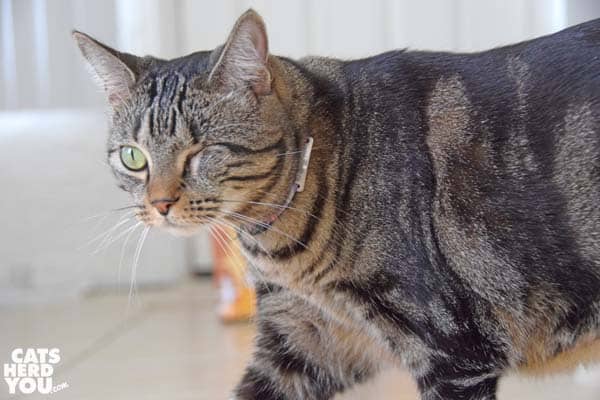 Ashton: What are you DOING?

Newton: I tried to warn you! 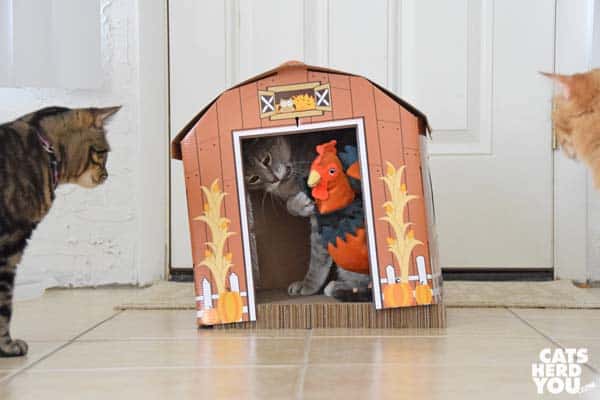 Newton: Hey, check it out, I have a chicken.

Pierre: I think that’s a rooster. 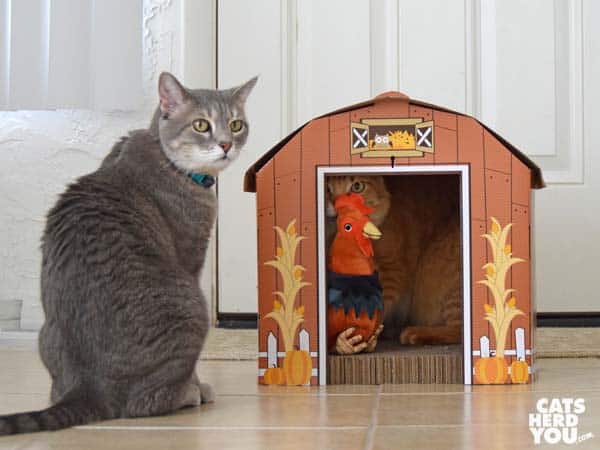 Newton: Ashton must have left it here to make eggs for her chicken emporium.

Pierre: That isn’t how roosters work, Newton. Didn’t anyone ever explain the birds and the bees to you?

Newton: What do bees have to do with anything? This is about a chicken. 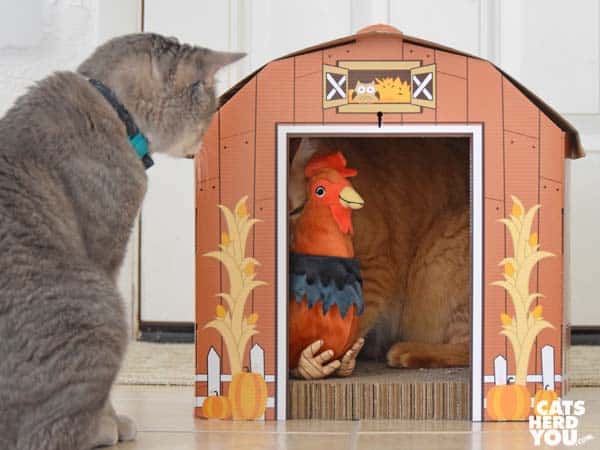 Newton: It doesn’t TASTE like chicken. Ashton needs to be more picky about her stock. 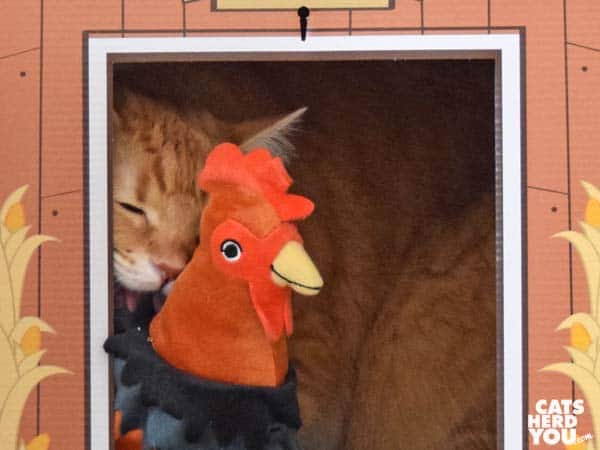 Pierre: You need to come out from inside there and let me have a turn.

Newton: Why? This chicken and I are just getting started making friends. 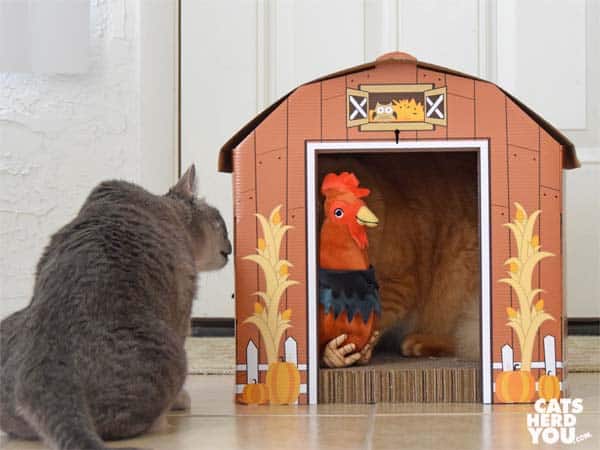 Pierre: Because my right paw said so.

Newton: Hey, watch where you’re putting that thing! You could poke out the chicken’s eye. Think of the chicken.

Pierre: It’s a rooster. And I am thinking of it. 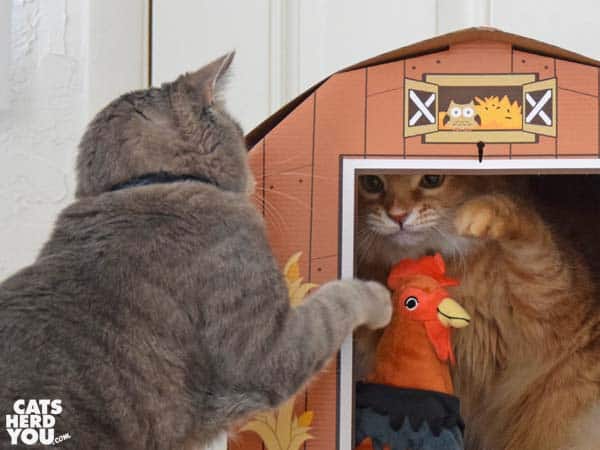 Pierre: That’s why you need to let me in! 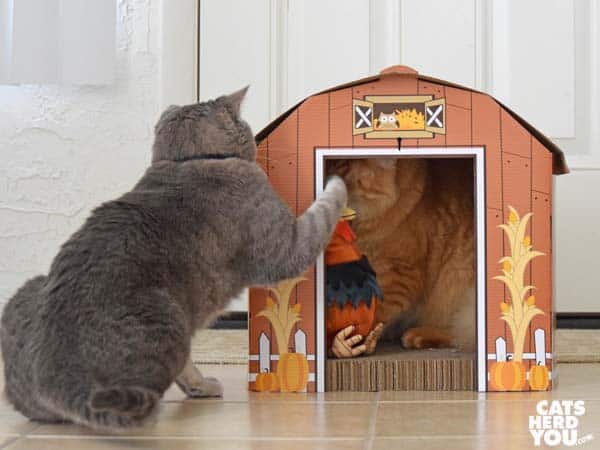 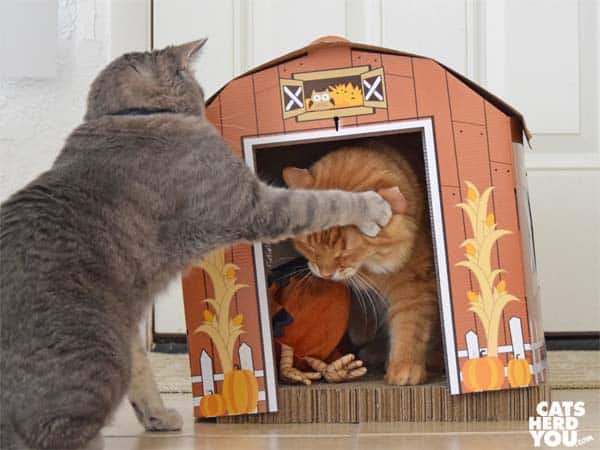 Newton: See what you did? You broke the barn. Knocked it off its foundation. And the chicken was so scared, he fainted. 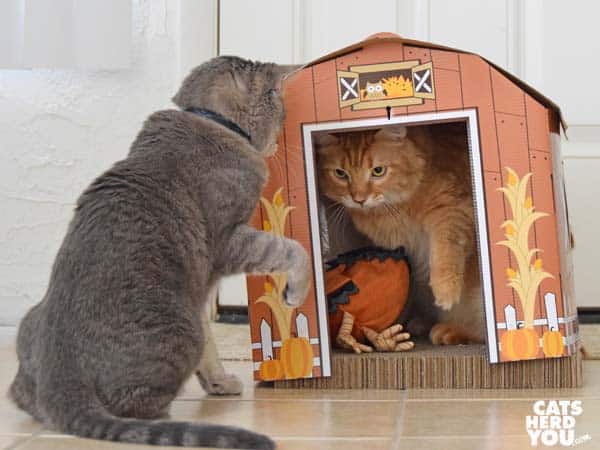 Newton: Don’t be such a bully, Pierre. if you want the barn so much you’re going to break it, I’ll let you have it.

Newton: We’ll see what Ashton thinks when she finds out Pierre made her chicken faint. 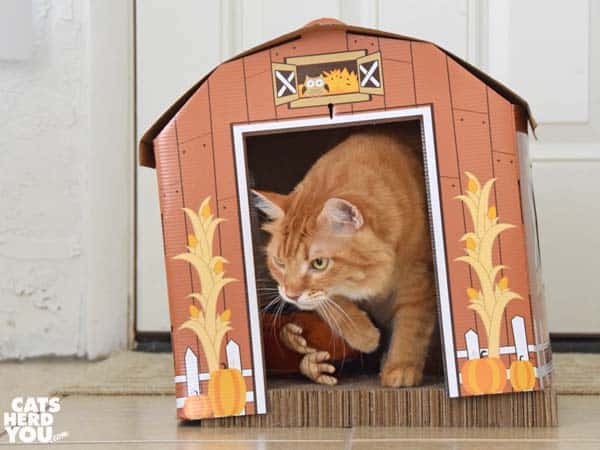 Newton: I know you’ve been waiting since last week to find out what happened with that amazing building I was negotiating for Ashton to use for her chicken emporium. It didn’t go well. The current owners didn’t want to sell. Not even when I offered them my favorite catnip toy. 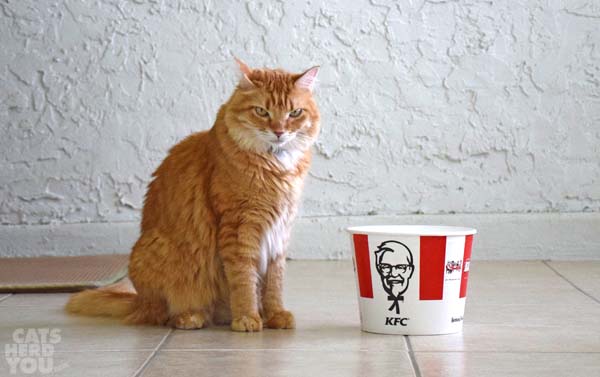 Newton: I thought the news would be easier for Ashton if I brought a little something back for her. But there’s a little problem… It was a long drive back, and I got kind of hungry. 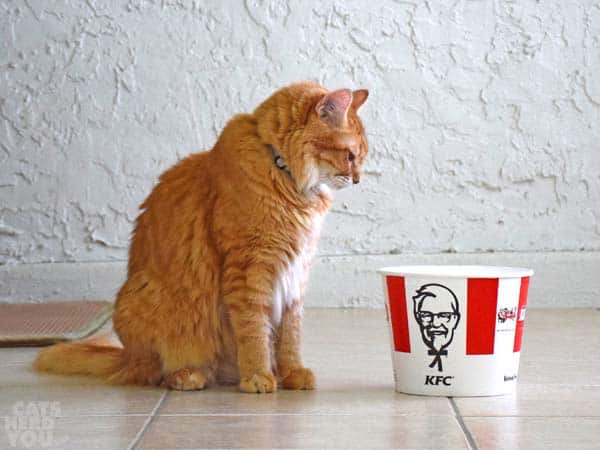 Ashton: Hey, Newton! What do you have there?

Newton: Oh, hi. I didn’t see you. Did you hear what I was saying about your chicken emporium building?

Newton: Well… this is for you. I’ve got to go. You know, realtor cat business.

Ashton: You brought me chicken? Wow, thanks! * SNIFF SNIFF * Hey, this is empty. NEWTON! Where did you go? 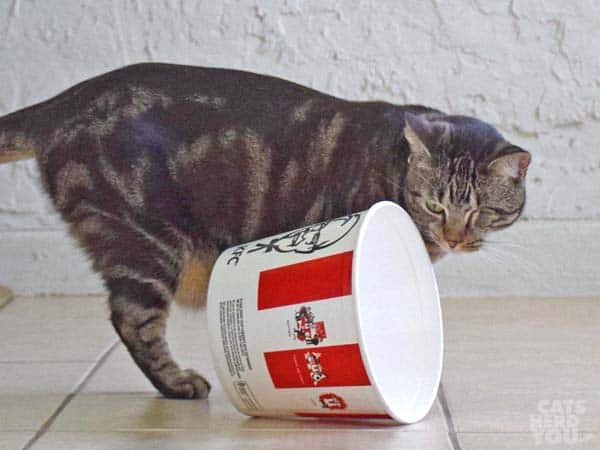 Ashton: He teased me with chicken? That’s just low. Lower than low. 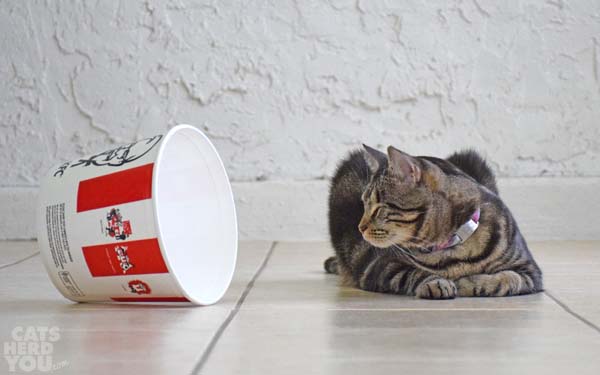 Ashton: What do you think I should do to show Newton he shouldn’t tease me like that? 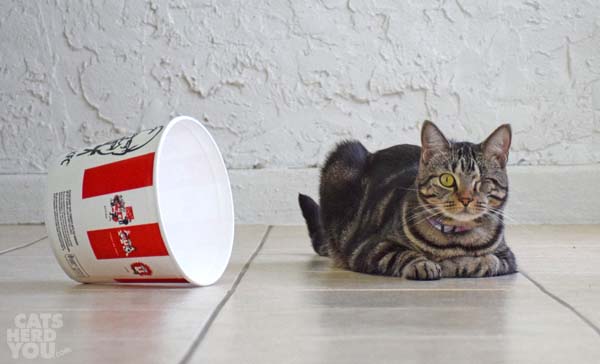 Have you seen the rest of our chicken capers?