You are here: Home / Archives for Cats

Last week, we talked about what you can do to make the houseguest visit a little easier for your timid cat. What about the cat who is the opposite? We have one of those. Newton is endlessly fascinated with visitors and wishes we had more of them more often. Especially if they have easily-opened luggage. 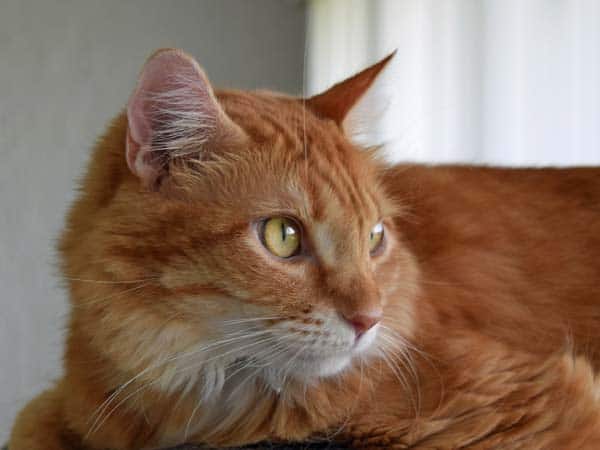 With a timid cat, you make sure the cat has a comfort zone while guests are in the house. With a brave cat, your role is more to make sure that your visitors don’t do anything that will accidentally cause a problem with your cat. For instance, does your cat get treats? If not, be sure the houseguests know. Your brave cat may be putting on a fetching enough face that houseguests will fall for it, and kitty can end up eating things that aren’t on his diet.

It’s probably best if houseguests zip or latch their luggage shut when it’s unattended. Some kitties like to steal objects from the luggage of unsuspecting visitors. Or even unzipped purses. Newton has been caught with his head and shoulders stuffed in a visitor’s purse as he explored its contents.

If your houseguests aren’t cat people, be aware of what they might leave out in the bathroom to be sure that none of it is hazardous to your kitty. Human medications are number one on the ASPCA’s list of common hazards to cats, and they are most likely to be left out or dropped in the bathroom. Hair rubber bands are also nearly irresistible to kitties, but can be life-threatening if eaten.

If you keep the lid of the toilet closed to prevent your cat from drinking treated toilet water, be sure your guest knows… or just keep the door shut to the bathroom altogether.

Speaking of closing doors, the one thing that may be a problem with visitor-loving cats that isn’t with timid cats is that they might follow a houseguest right out the door. Houseguests who aren’t used to watching for cats at exterior doors may leave doors ajar without realizing it is a hazard. For safety, consider closing your brave cat in a room at times when houseguests are most likely to leave the door ajar, such as when luggage is being brought in and out the door.

It’s fun to have a cat who enjoys visitors. A few precautions are all it takes to make the visit a rewarding one for your cat and eliminate worry for you.

Newton: A while back, we supported the crowdfunding for Tiny Timmy’s Dirty Flea Soap, and we have been eagerly waiting for a painting as our incentive for our support. The package from the wonderful artist Sheala Bacon has arrived, and I can’t wait to see my painting! 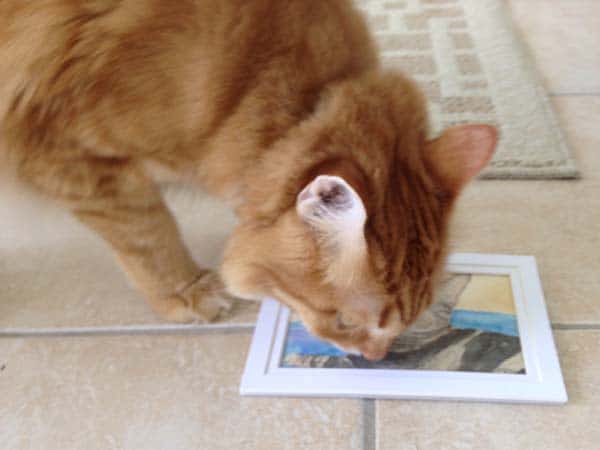 Newton: Wait a minute!  I don’t think this resembles me very much. There must be a mistake. 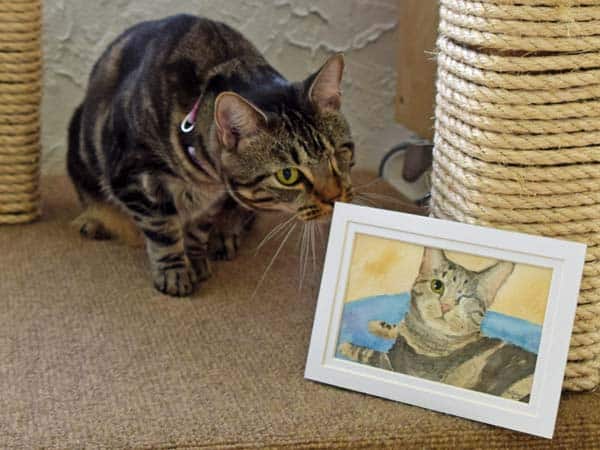 Ashton: I love my painting, Sheala. Thank you so much! I can’t wait to have it up on the wall where everyone can admire it. 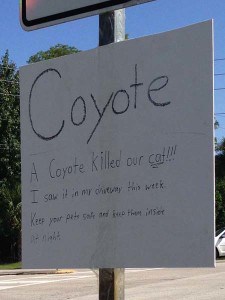 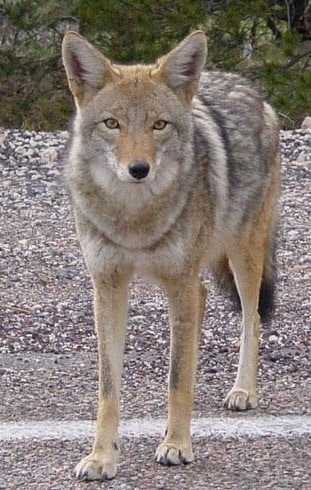 Ashton: I’m going to tell you one of my secrets. Come on over here and sit by me. I’ll make room. 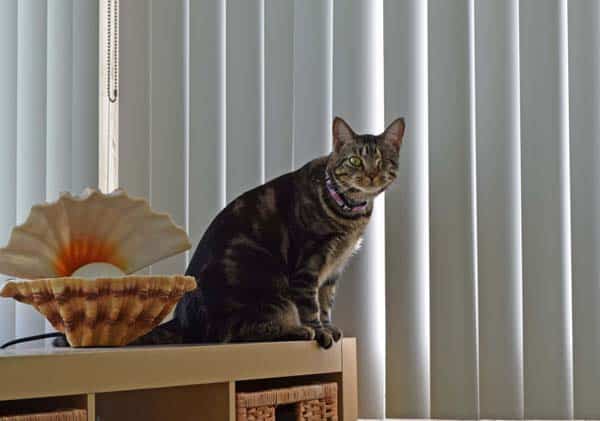 Ashton: I know that some jungle cats have plants to hide behind to watch for prey. Well, I don’t have any plants because Newton eats any plants that come into the house.

Newton: I heard that!

Ashton: Well, you do eat them! Don’t pay any attention to him. This is what I wanted to show you. Check it out. It’s my own jungle cat view of the outdoors. It’s the best view in the house. 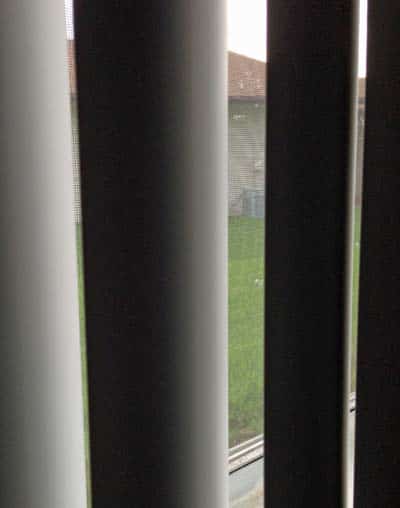 Ashton: This window looks out between the townhouses, and anything that wants to go from the front yard to the back goes by here. I get to see all kinds of things: big walking birds, deer, humans, even humans with dogs. And I’m not scared of any of them because I can see them, but they can’t see me. So I sit here all day instead of on the sofa, just watching to see what might happen by. 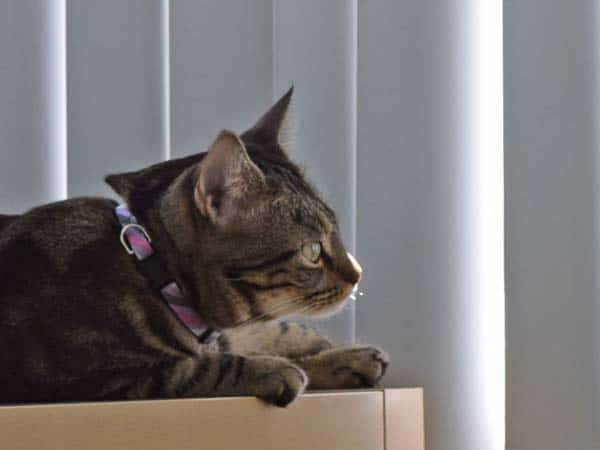 Ashton: Sometimes I even see a frog or a squirrel right on the window screen. When I do, I pounce.

Newton: Is she looking out that window again? Ashton, stop that. You’re bombing my photo!

Ashton: I can’t hear you. I’m behind the blinds. 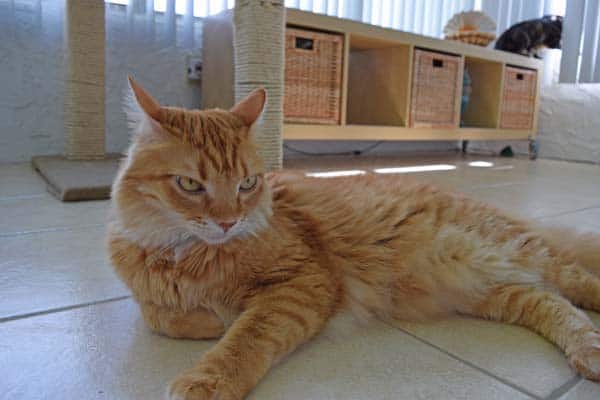