You may remember that Ashton’s story is included in the anthology Rescued, Volume 2: The Healing Stories of 12 Cats, Through Their Eyes. Her photo is on the book’s cover. 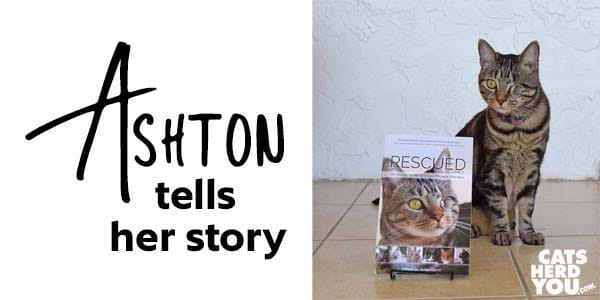 Each story in the book is told from a cat’s point of view, and each story is its own special tale of how cats help their humans heal.

Ashton’s story is about what happened to a lost kitten afraid of humans. It shows how the love and trust of a tiny cat can heal a broken human heart. 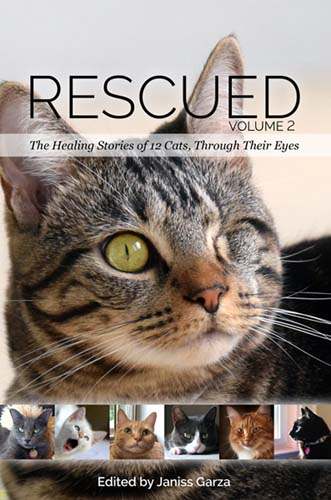 Cats like Ashton are lucky that they end up in safe homes, but many don’t. So the sale of every book during March benefits Candy’s Cats, a central Florida-based cat rescue organization. Candy’s Cats finds homes for hundreds of cats a year, and they are putting finishing touches on what will be greater Orlando’s only cat-only adoption center so they can find homes for even more cats.

We heard from lots of people that Ashton’s special saying, “Humans are scary” touched them. So we have a very special giveaway. If you purchase Rescued, Volume 2 during the month of March, you are eligible to enter our giveaway for some exclusive Humans are Scary gifts not available anywhere else. 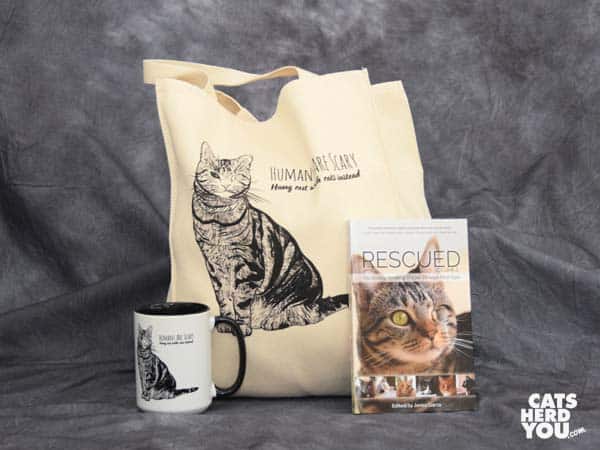 Both the tote bag and the mug feature a drawing of Ashton and the saying “Humans are Scary. Hang out with cats instead.”

It doesn’t matter where you buy Rescued, Volume 2 during March, they are all eligible to enter the drawing. You can purchase a pawtographed copy of the book directly from us. You can also purchase from Amazon in paperback or for your Kindle reader. All of these will benefit Candy’s Cats, and all of them allow you to enter the Humans are Scary drawing this month.

This post contains affiliate links. I receive a small commission when a purchase is made through these links. Commissions earned for the sale of these books during March will also be donated to benefit Candy’s Cats.

Our friend Summer wrote about the bedtime rituals at her house, and it inspired us kitties to tell you about ours, too.

Bedtime treats started as a time for Pierre to get a make-up meal for the ones he didn’t finish during the day. He is a fussy, slow eater and almost never finishes his meals, and giving him a third, small meal lets him spread his food out during the day a little more. 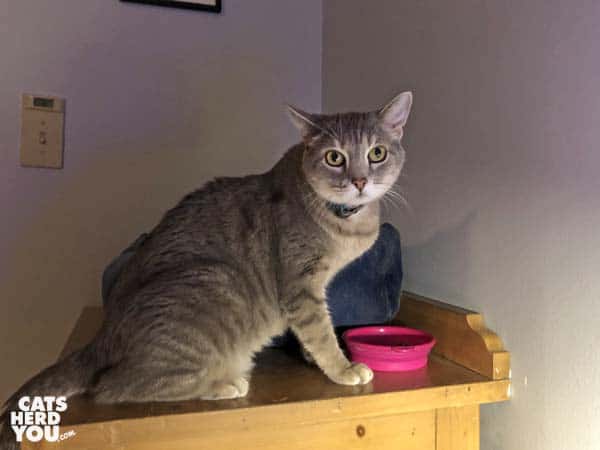 The rest of us cats get treats during this time because if we don’t get treats, we bother Pierre too much! It is also a chance for us to all practice our tricks. Cupcake fist bumps. Ashton waves. Newton says he is too handsome for tricks and steals the treats while the head peep tries to get him to do anything. 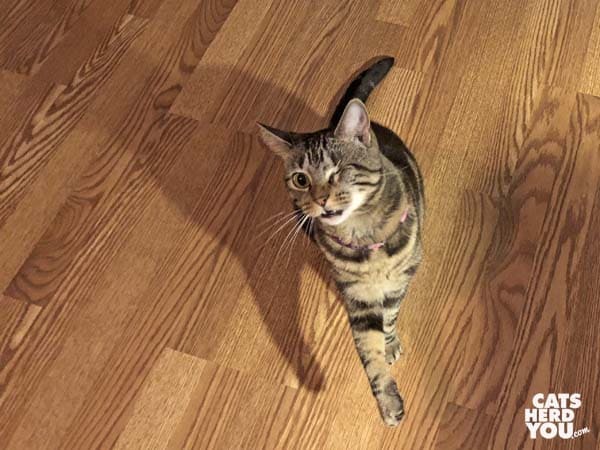 Pierre is so slow that we finish our treats way before he is done. This is when the head peep goes to brush her teeth. This is a huge distraction for Cupcake, who would otherwise bother Pierre.

Cupcake likes to observe the whole tooth brushing routine because she knows that at the end, the head peep will pour out a cup of water for her into the sink. She loves to play in the stream of water. 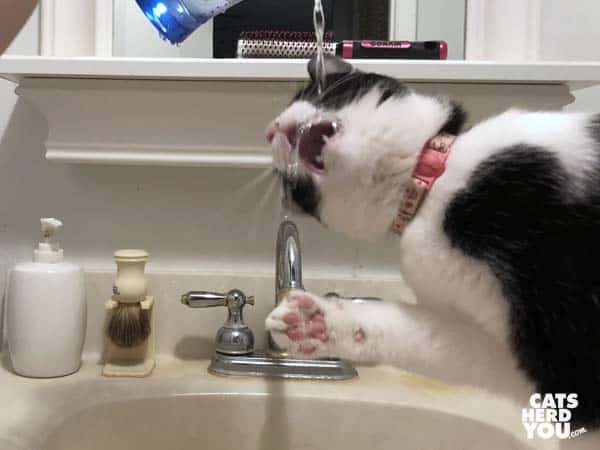 By the time Cupcake is done kicking bath towels into submission, Pierre is finally done eating. Ashton is in charge of making sure he didn’t leave any crumbs. 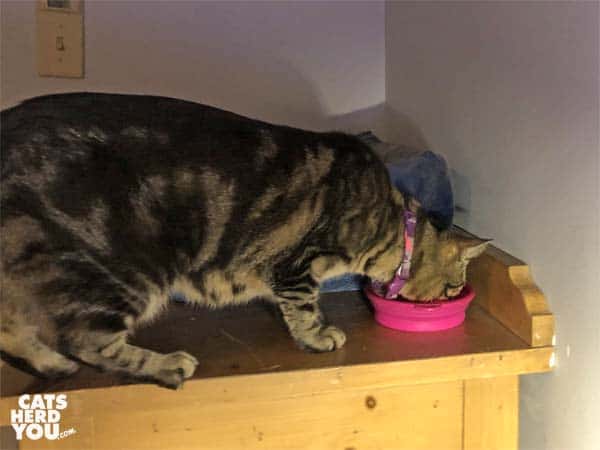 When Ashton finishes, the head peep washes the bowl and sets it out to dry for the next night. The silicon bowl is only used for Pierre’s bedtime treats because our usual bowls make a distinctive sound when they are set on the counter. The head peep thought having a bowl that didn’t make that would would make it so we didn’t associate bedtime treats with food from a bowl. Sometimes she doesn’t give us enough credit.

The manpeep usually goes to bed before we do. He sleeps in the other bedroom because he sleeps so loudly that the head peep would never be able to sleep. So when the head peep is headed to bed, she can hear the squeak of the hinges as Cupcake goes to visit him for a while.

If the head peep has the bedroom light on for a while reading, Pierre comes back to sit on her chest. 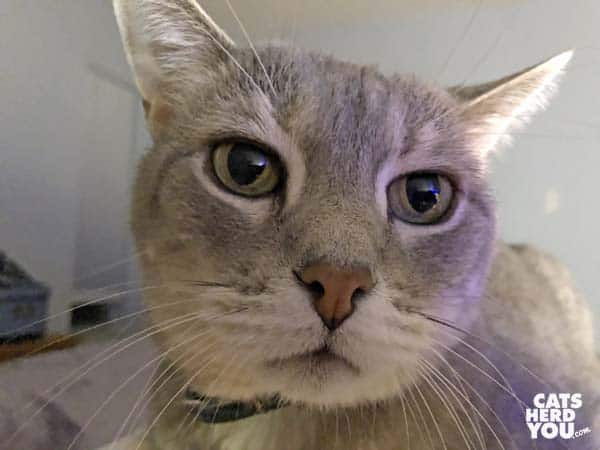 Once the lights are out, it’s time for Ashton to take up her spot on the bed between the head peep and the edge of the bed. This is Ashton’s spot, and only Pierre tries to take it, and only occasionally. When he does, Ashton huffs a big sigh and squeezes in next to him.

Pierre’s self-assigned spot on the bed is the other pillow. It’s the softest place on the bed, so it makes sense that a senior cat like him deserves such a comfy place to sleep.

Cupcake usually comes to bed later during the night and sleeps between the pillows. The head peep knows when this happens, because Pierre hisses at her for being so close to him, but Cupcake does it anyhow. Once she is cozy between the pillows, Cupcake likes to stretch out and often sticks her feet into the head peep’s face as she is sleeping.

For many years, the manpeep got up at irregular hours. This means that anyone getting up at any hour of the night might mean breakfast, and we don’t want to miss out.

The head peep lets us know that she is going to the human litter box and not getting up to feed us by not turning on the light when she leaves the room. If she turns on the light for any reason, we know it must be time for breakfast. 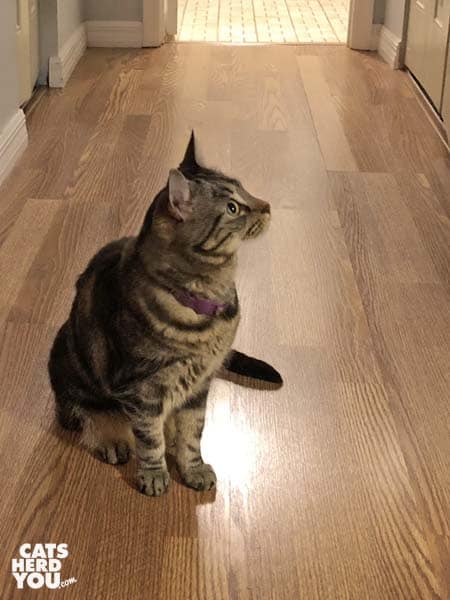 Our humans get up at early hours, so they have alarms. When the alarm goes off, we all run into the manpeep’s room to be sure he wakes up. Cupcake comes running back to help make the bed, then she goes back to supervise the manpeep, since he usually dishes out our breakfast.

Is your bedtime routine complicated, too?

Pierre: So here I am, chilling on my catghan. 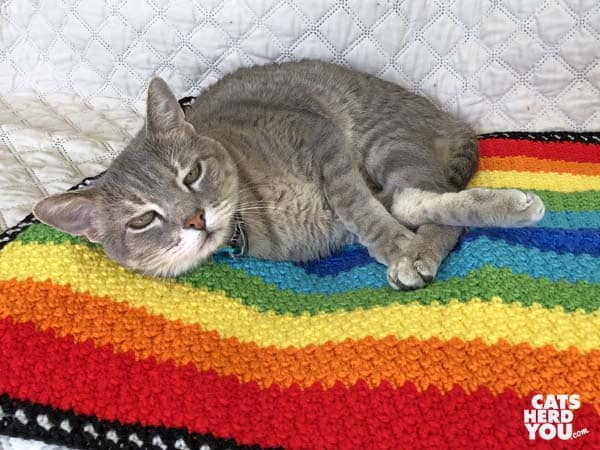 Cupcake: That isn’t your catghan. Our friend Kristen at Kristen’s Comforts made it for me. Then the head peep didn’t check the poo box for a long time, so it got here late. And now I can’t use it because you’re on it. 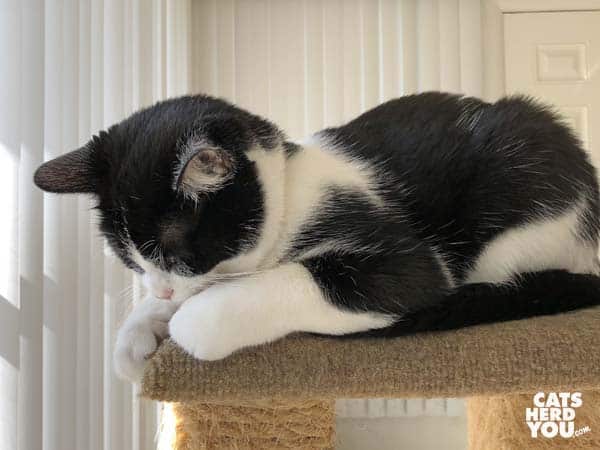 Pierre: I think that’s a PO box, not a poo box. From the post office. If this had come from the poo box, I wouldn’t be relaxing on it. 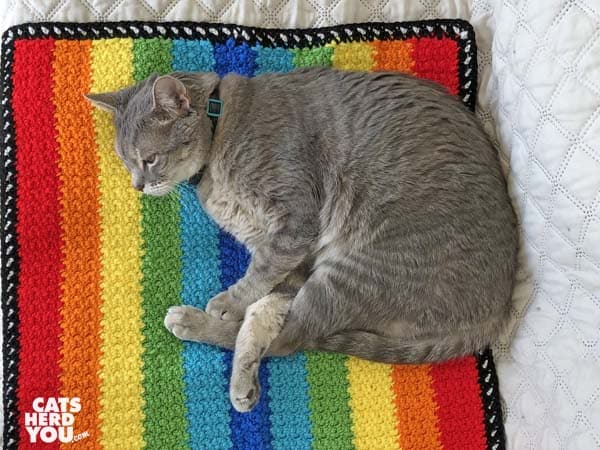 Ashton: You didn’t tell me that was Cupcake’s catghan! What kind of trouble are you trying to make on my sofa, Pierre? 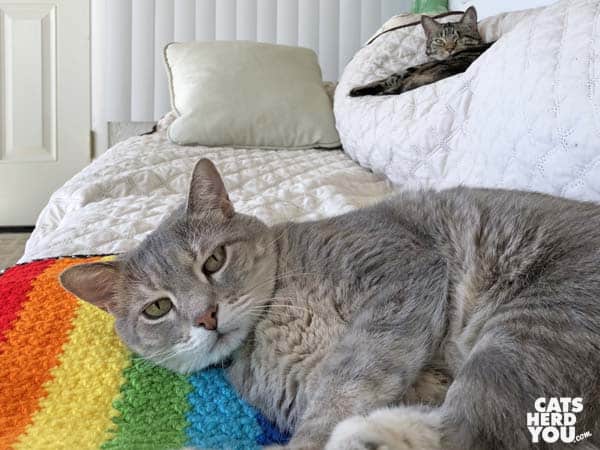 Cupcake: Ha! I’ll get it back any day now. As soon as Pierre is done with it, or when Ashton makes him leave her sofa. 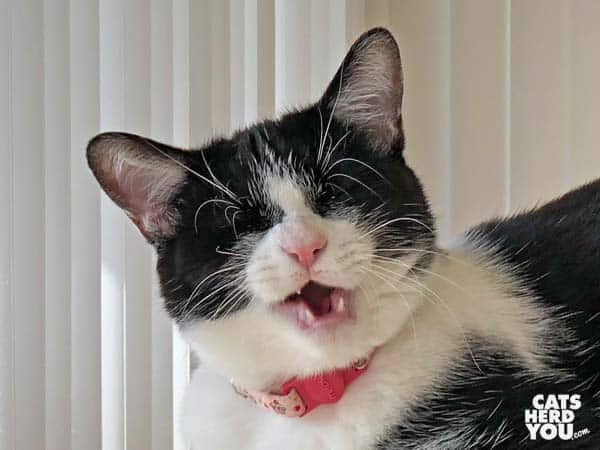 Big thanks to Miss Kristen for making Cupcake’s Catghan with her very own hands! Pierre always gets to try every new thing that comes into the house first, but he will let Cupcake sit on it by springtime. We think. 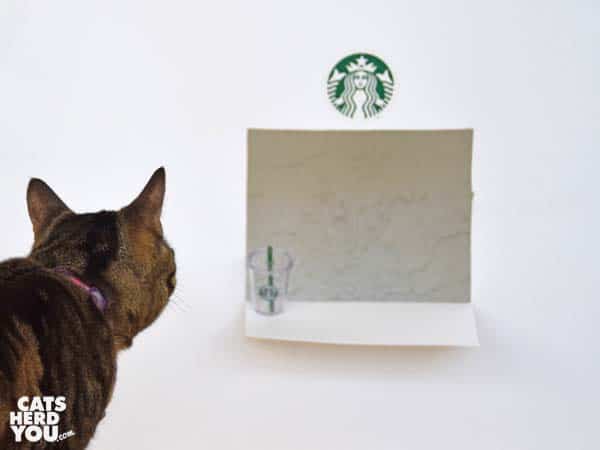 Ashton: There’s nobody back there. How does this thing work? 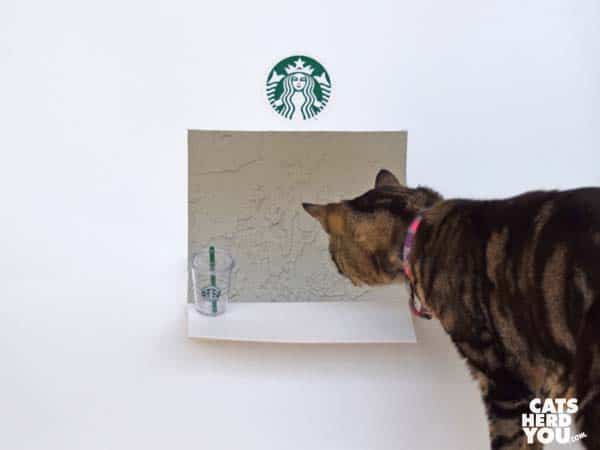 Cupcake: Oh, I know the answer to this one, Miss  Ashton. I know that symbol! 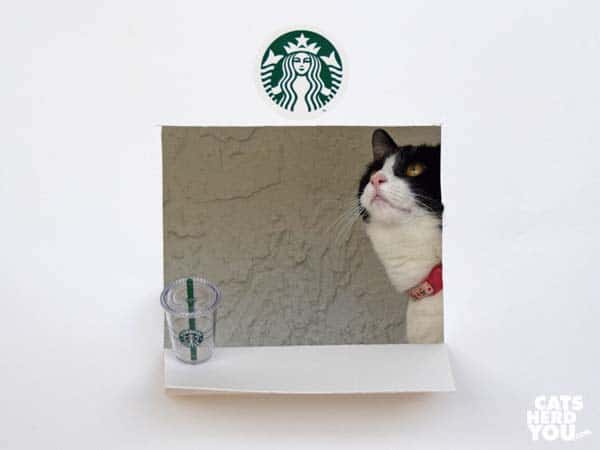 Cupcake: Welcome to Catbucks. Can I take your order? Then the whipped cream comes out. 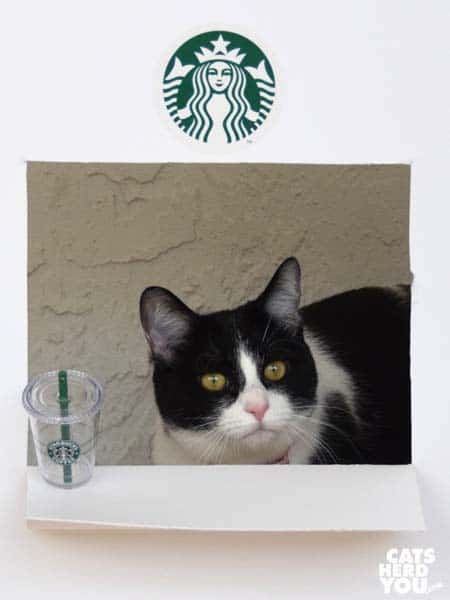 Cupcake: We can’t do this without the whipped cream. I’ll be right back as soon as I can find it. 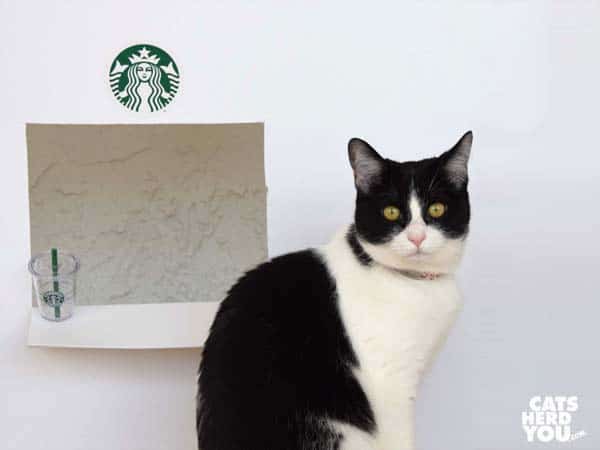 Newton: Did someone say whipped cream? 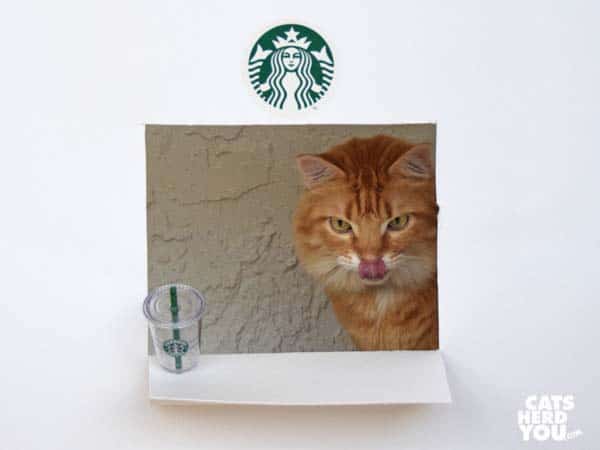