Cupcake’s track record with holiday-themed meet-and-greets hasn’t been great. She was afraid of Santa Claus in past years. But when we heard she had the chance to see the Easter Bunny, I thought she would do fine in her stroller after all of the strangers she met from it at Global Pet Expo.

She wasn’t sure what to make of the Easter Bunny’s mittened hands, but she sat in her stroller next to the big rabbit for photos. 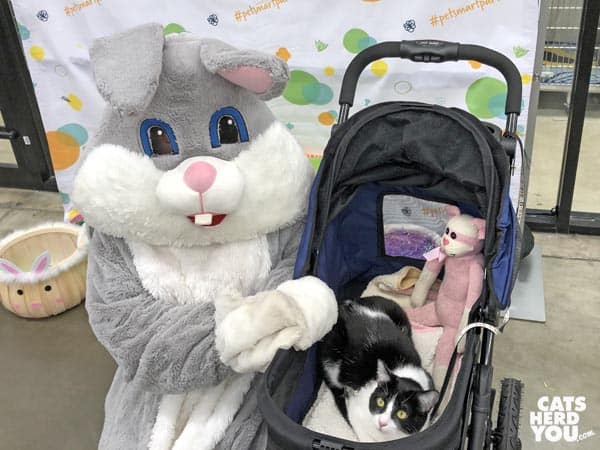 Afterward, she stood up, and it seemed like she was ready to have another photo, so Cat Dad helped by picking her up and sitting with the Easter Bunny. Cupcake still didn’t approve of those bunny mittens. 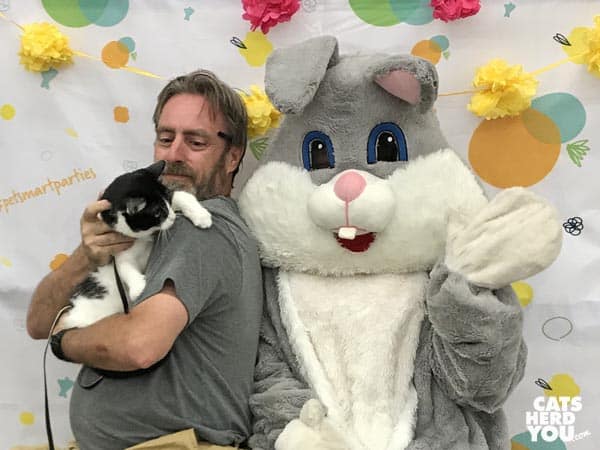 Then there was a question about which direction to look for the camera. Not back there, Cupcake. That’s the adoption center! They aren’t taking photos there. 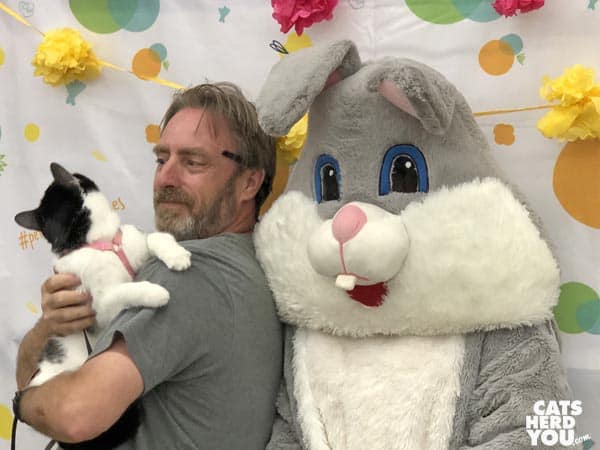 Cat Dad pointed out where to look for her. 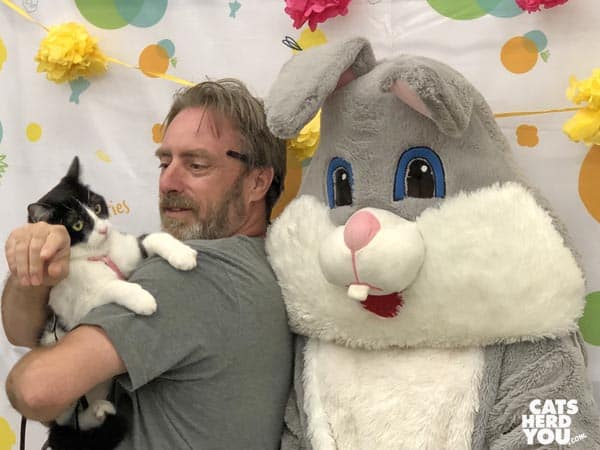 Cupcake looked right at the camera for her big photo. 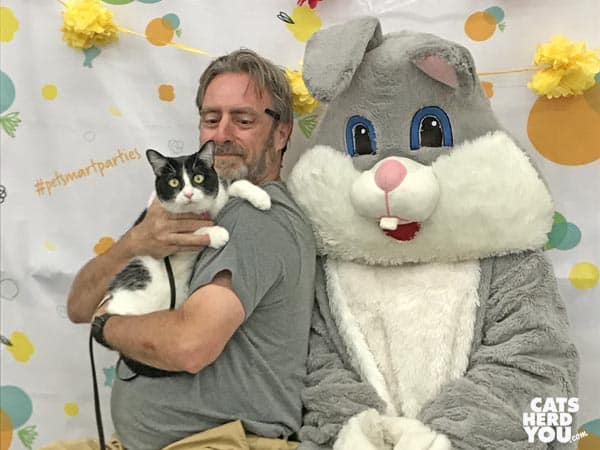 This modeling thing isn’t so hard!

Cupcake: Oh, hi, Rocco. Nice of you to look in my window like that. Did you know your paw poked me in the butt? 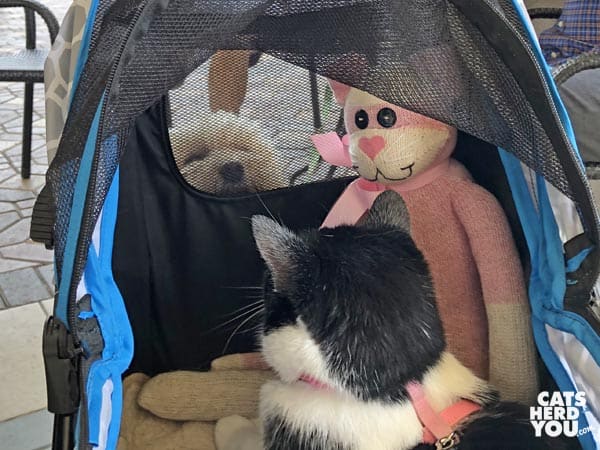 Cupcake: How are you today, Rocco? 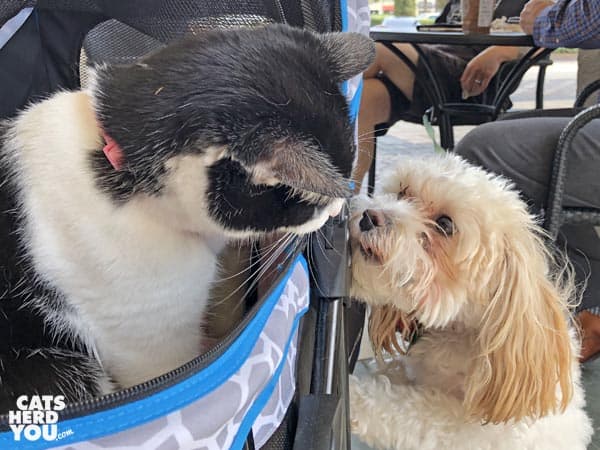 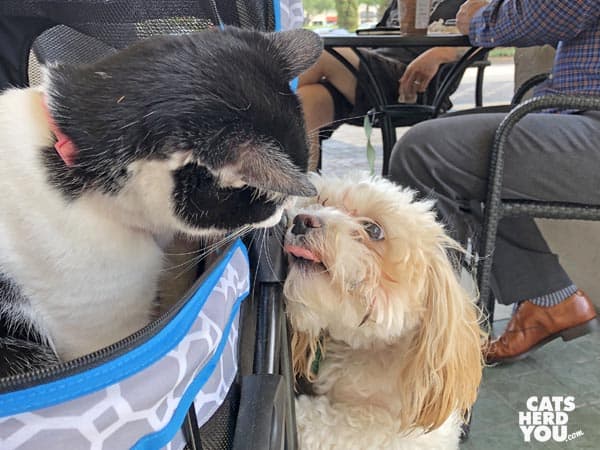 Cupcake: Whoa! The tongue thing is a little too personal. 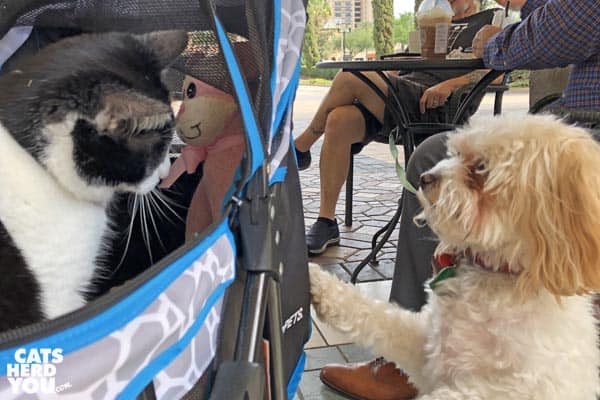 Cupcake: I’ll keep my tongue over here if you keep yours over there. Deal?

Ashton: I was minding my own business, cuddling into my favorite spot on the sofa when it happened. 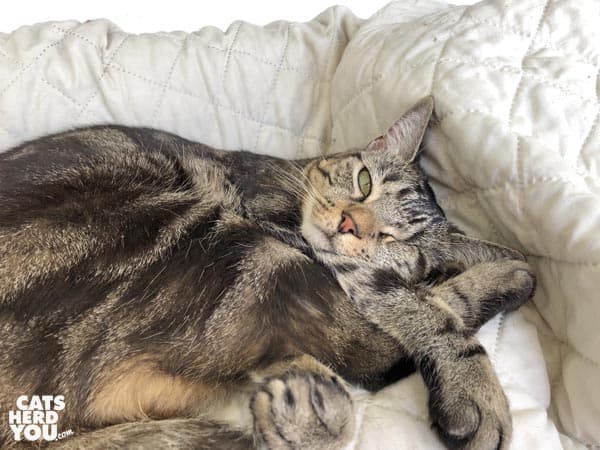 Ashton: I was closed in a carrier and off we went to the vet’s office. I remembered this place, and I didn’t like it.

They weighed me and said I had gained half a pound. Does this mean I can’t share English Muffins in the monring any more? 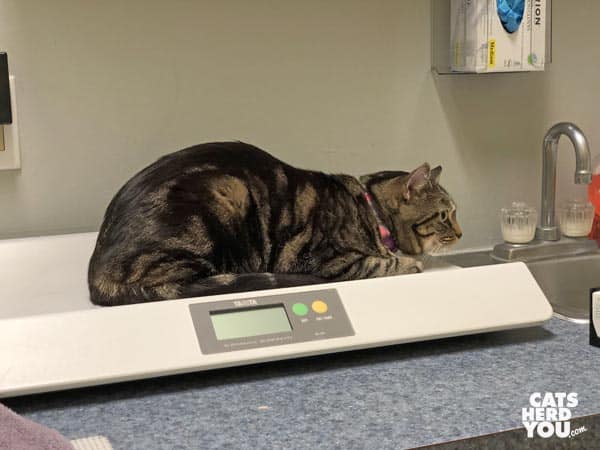 Ashton: It was a long day, and I was so glad to be home. As much as I loved sleeping in my carrier before my vet trip, I won’t do it now. No way. I’m going to sleep here instead. 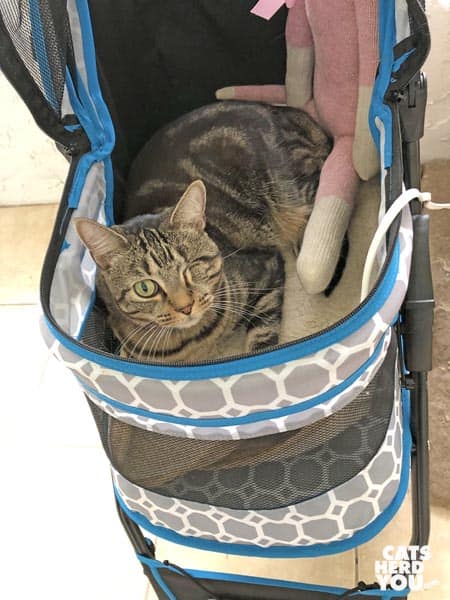 Ashton: This spot is warm and cozy. And most important, it isn’t going anywhere.

Yesterday was Cupcake’s second birthday, and we had a celebration. How do you celebrate a birthday for Cupcake? With a cupcake, of course.

Newton got to the cupcake first. 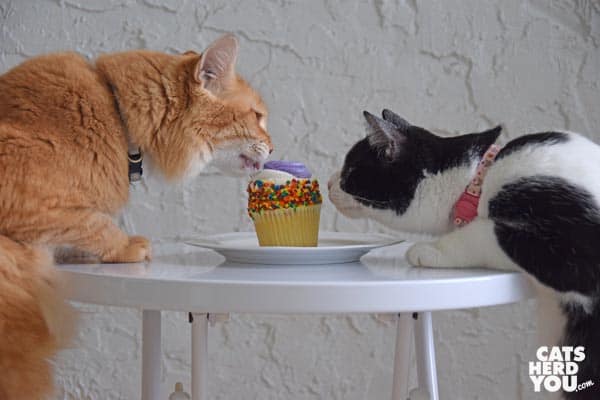 Cupcake: What are you doing, Mr. Newton? 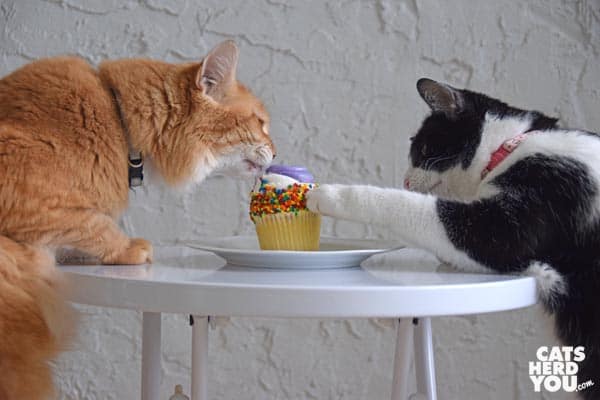 Cupcake decided to help herself, but there wasn’t a fork in sight. 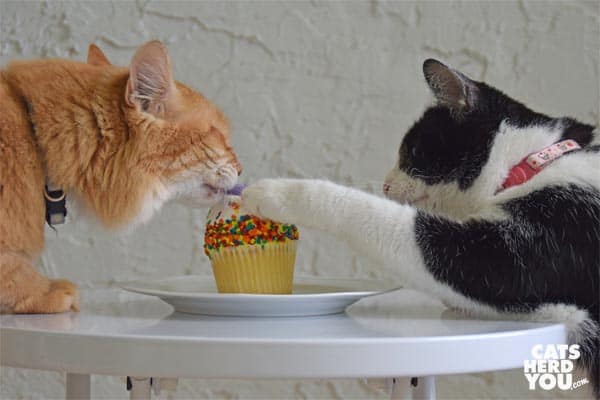 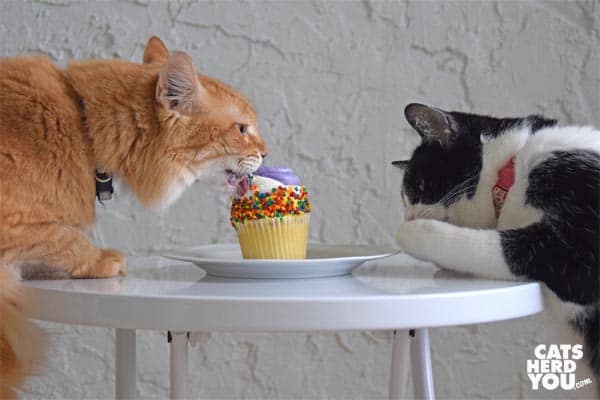 She used both paws to sample both sides of the cupcake. 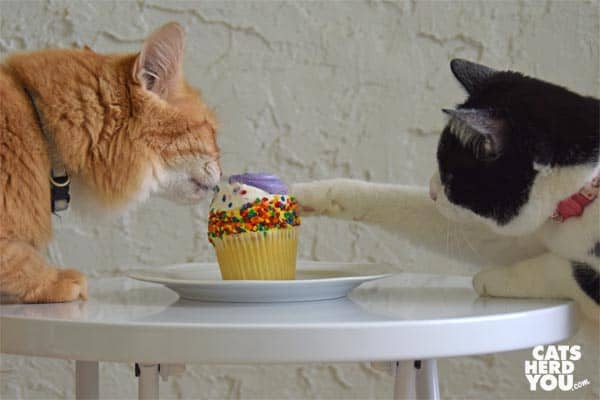 Cupcake: Who needs a fork when I have claws? 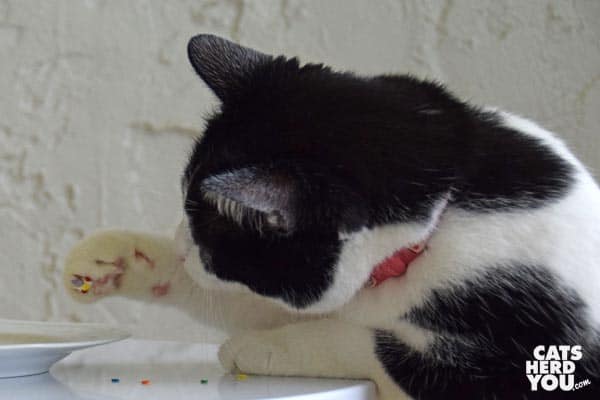 She ate it, sprinkles and all! 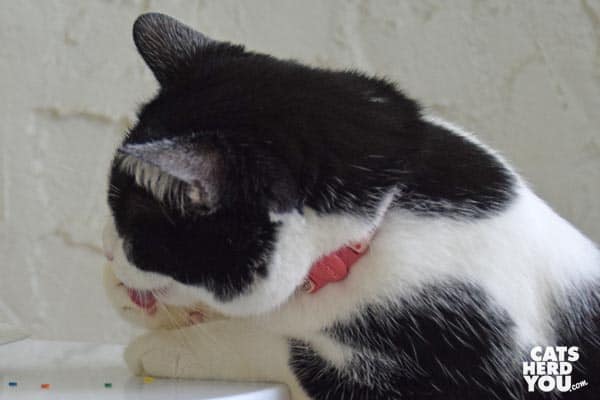 Even after Newton gave up and left, Cupcake continued to eat icing using the paw method. 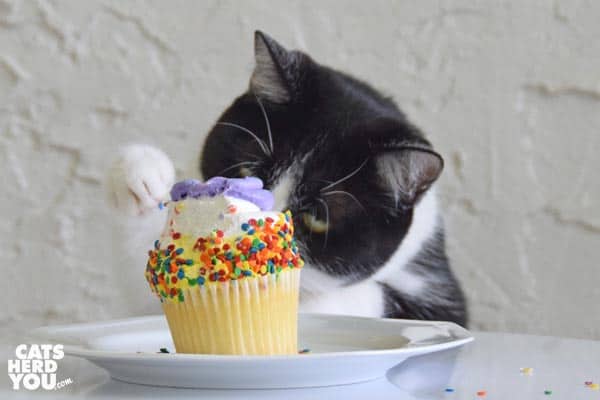 Until she finally realized she could slurp it up. 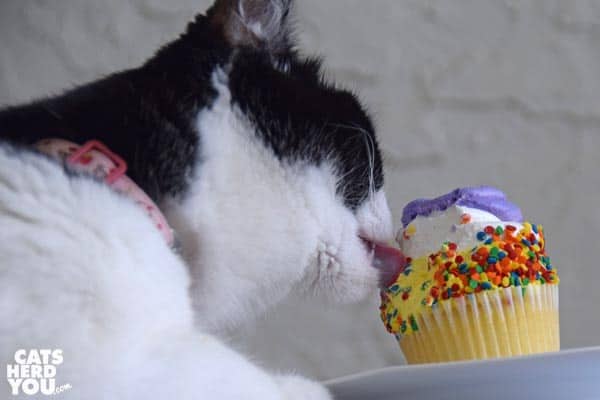