You are here: Home / Archives for Life With Cats 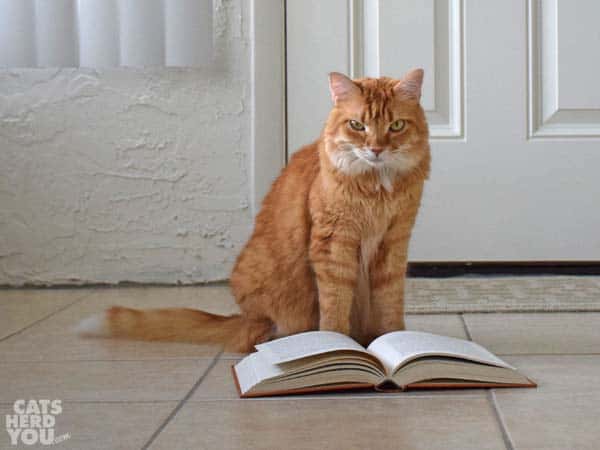 Over the weekend, a friend sent me this tweet:

She clarified that it was going to be a gift for her mother. Talk about the pressure being on!

I got up from my computer and walked across the room to the bookshelf to and take a look at cat books there to see what books I really loved. Back when I moved five times in seven years, I pared down my book collection quite a bit, so if I was willing to keep carrying a book from house to house, I was pretty attached to it. I was surprised to find that I have almost no cat fiction on my shelf except one book: 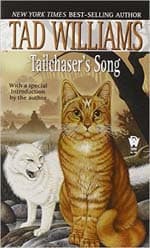 Tailchaser’s Song is a the story of a young cat who sets out on a quest to locate his best friend and discovers that there’s so much more to the world than he ever imagined. I sometimes describe it as a cat version of the Richard Adams’ Watership Down novel about rabbits, but that’s oversimplifying things a lot. These characters stand well on their own and you really

Cat nonfiction is another story entirely. I have lots of that that I can recommend. 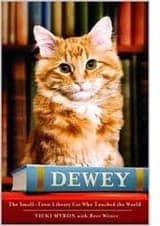 Dewey: The Small-Town Library Cat Who Touched the World by Vicki Myron is kind of a no-brainer if you’ve got someone who loves both cats and books on your list. A kitten left in the library book drop one frigid night was dubbed Dewey Readmore Books and became a valued member of the library staff. It’s a wonderful read about a cat who was not just loved by the library staff, but by the small town where he lived and by people around the world.  I was surprised to discover that there is now a young adult edition of this book edited for younger readers called Dewey the Library Cat: A True Story, which takes out some of the author’s personal backstory that is interwoven into the book and also explains cultural references like Spuds MacKenzie. Boy, did I feel old realizing that needed an explanation! I have the original edition, which is out of print in favor of the YA version.

The Cat Who Came for Christmas is the story of a white kitten who came into the life of a crumudgeon one Christmas Eve and changed his life forever. Written by Cleveland Amory, founder of The Fund for Animals, the two followup books, The Cat and the Crumudgeon and The Best Cat Ever are also great, but there’s something about a dog lover’s journey into discovering how to come to terms with a cat that is especially charming in the first book of the trilogy. I should add that none of them is specifically a Christmas book, despite the title. Even though this book is part of a trilogy, it seems to have been written as a standalone book and doesn’t require the other two. 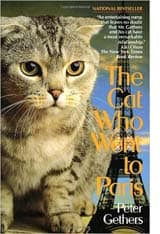 The Cat Who Went to Paris by Peter Norton is another delightful book about a man who didn’t like cats until he met the right cat, who happened to be a Scottish Fold kitten named Norton. I especially loved reading this book along with its followups, A Cat Abroad and The Cat Who’ll Live Forever, because Norton goes with Gethers to all sorts of events and places. These days, seeing a cat on a leash is unusual but not unheard of, but when these books were originally published, no one took their cats anywhere except the vet, so that made his tales even more fun, and the fun holds up rereading them today. The Cat Who Went to Paris was apparently written as a standalone book, so you don’t need to read the whole trilogy to get to know and love Norton. 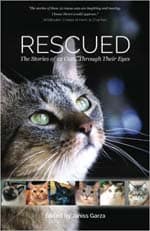 Rescued: The Stories of 12 Cats, Through Their Eyes, edited by Janiss Garza, is one of the few recent cat books on my shelf. This anthology brings the stories of a dozen unlikely cats to life by letting them narrate how events unfolded. Each cat has its own, distinct voice, and the stories are frightening, joyful, and inspiring in turn.

The problem with the nonfiction books above (spoiler alert) is similar to the problem we have in real life: cat lifespans are shorter than our own, and the cats grow old and eventually pass on. In the trilogies, it isn’t until the final book, but some people don’t want anything to do with a book where that happens. I’m including recommendations for a couple more books from my shelf that won’t require all your tissues. 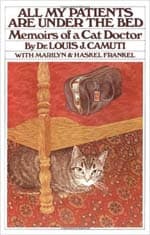 All My Patients are Under the Bed by Dr. Jouis J Camuti is an old favorite about a housecall doctor in Manhattan and the quirky cats and people he encountered during his practice. The laugh-out-loud stories about his experiences still hold up 35 years after its original publication. Veterinary medicine has changed quite a bit in the last 35 years, and I wouldn’t recommend this book to someone who just got their first cat and is absorbing every bit of veterinary advice like a sponge. But for someone who has had cats for years and enjoys hearing the funny stories about how humans and cats intersect, this is a great read. 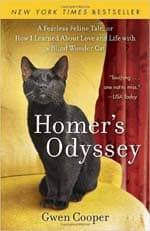 Homer’s Odyssey by Gwen Cooper is the amazing tale of a blind kitten who never slowed town to know he had limits because of his lack of sight. People may shy away from this book because it’s about a cat who is differently-abled, especially worrying if it has a gross-out factor or is going to make you cry. It’s not graphic in the least, and if you cry while reading it, it won’t be because of anything bad happening to the cat They will likely be tears of joy. It’s an uplifting story, and a book I have recommended time and time again.

These are favorite books you would actually see on my shelf, published before I adopted ebooks as my primary reading source. What favorite cat books are on your bookshelf?

This post contains affiliate links, which means we receive a small percentage if you make a purchase using the link on this page.

What do you buy for that cat who has everything? We have a few ideas! 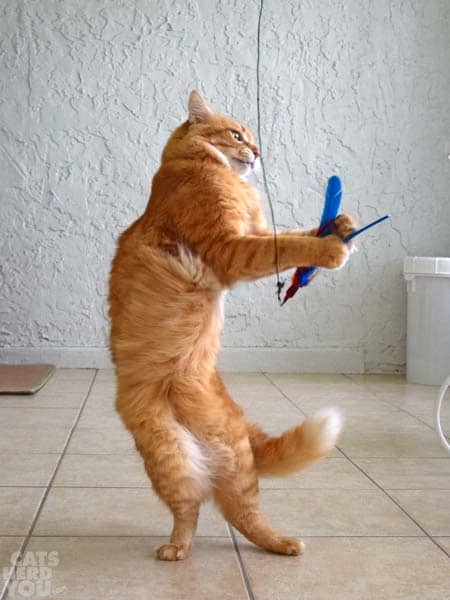 All feather toys are not created equal. Some just dangle, even when humans wave them back and forth, but the way that Da Bird flutters through the air is truly irresistible. Just ask Newton, who knows exactly where it’s stored and gets excited every time the closet is open. 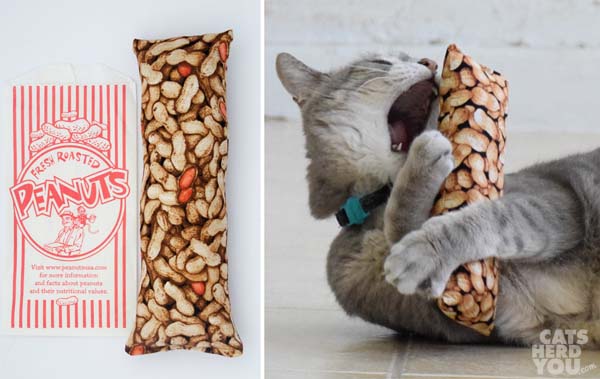 There’s something that makes humans smile when they see a cat toy that looks like something else they are familiar with, and the roasted popcorn peanuts kicker toy one never fails to get a laugh, since it arrives like roasted peanuts in a paper bag. But what makes cats smile is the premium catnip inside. Pierre purrrsonally recommends this toy as one of his favorites. 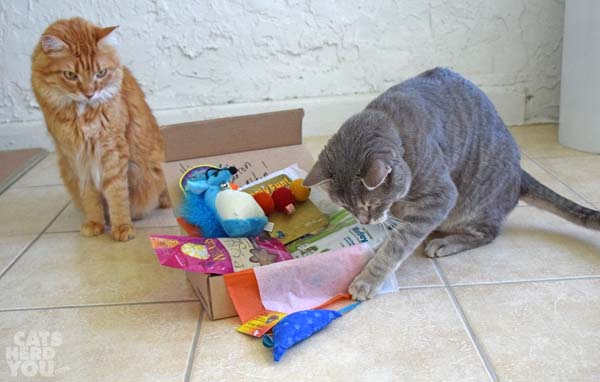 Wouldn’t it be cool to give a gift that keeps on giving? How about new toys and treats every month? The meowbox is a monthly cat subscription box for your cat, full of fun toys and tasty goodies, delivered to your door. Every box is personalized with your cat’s name(s), and every box purchased means a can of food purchased for a shelter cat. We reviewed the meowbox and gave it enthusiastic paws up. You can buy meowbox at a 10% discount with our exclusive discount code: CATSHERDYOU10 on the meowbox web site.

It’s super-comfy, plush-lined cat bed. That’s all you have to tell your kitty. They don’t want to think about the other thing that happens to that comfy cat bed when it converts into a carrier and takes them to places they might not want to go. The Sleepypod is a comfortable bed to hang out in at home, and when you must travel, it’s a crash-tested carrier. We find it more calming and more comfortable to travel in our familiar, mobile pet bed than a traditional carrier, and it’s a favorite napping spot, too!

Disclosure: This post contains affiliate links, which means we get a small commission for our cat treat fund if you purchase after clicking the link on this page.

My friend Anna-Marie told me recently that one of her cats is crazy for olives. I was surprised, and I had never heard of that. Then again, since I don’t like olives, there’s no likelihood that one of my cats would find one around the house, either.

For the purposes of science, that was going to have to change.

In the meantime, I did some research. Olives are well-known for containing oleic acid. In fact, oleic acid is the component of olive oil responsible for its ability help to lower blood pressure in humans.

Oleic acid is also a component of the facial pheromones your cat spreads by rubbing her chin against you or objects in the house. In fact, the artificial pheromone diffusers for cats you can purchase to plug in around the house have oleic acid as an ingredient in the synthetic pheromone.

It’s likely that cats who enjoy olives are actually responding to the oleic acid in the olives. They aren’t hoping to drop one into a martini or anything.

Cats have been known to go wild over squished odorous ants, which also contain oleic acid. So there seems to be a connection. My cats may never have seen an olive, but we have had ant invasions in the past, and they were completely uninterested. Maybe the ants in Florida wear deodorant.

At any rate, it was nearly time to try this olive thing at home. Not knowing anything about olives except I don’t like them on my pizza, I went to Whole Foods and selected four different olives from the olive bar. My main criteria was that they were all different and that none of them contained garlic or onions in the ingredient list. 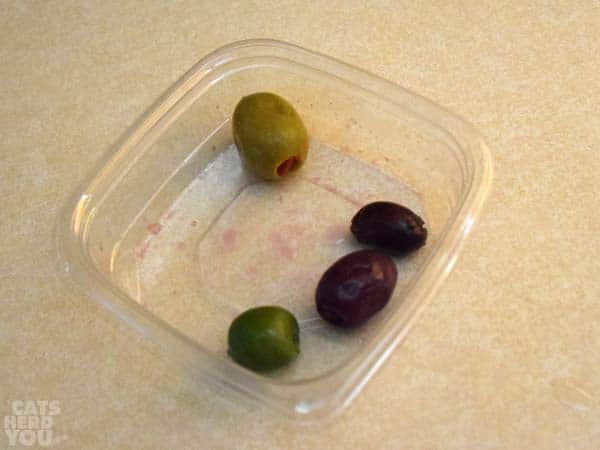 I cut up very small pieces and put them on a plate for the cats to inspect.

Pierre: What did you get on your ear? It smells funny! 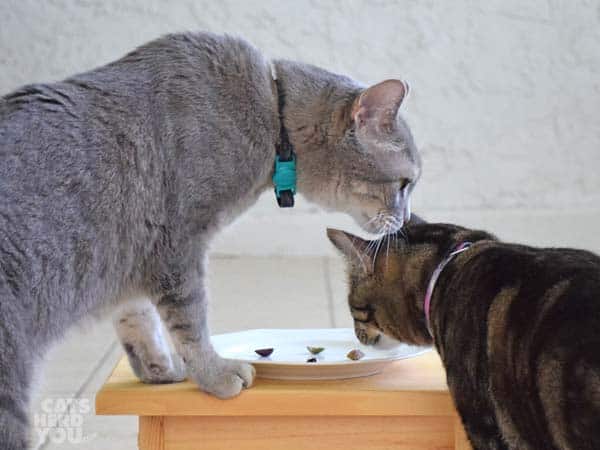 Newton: What ARE those things? They’re on a plate like food, but they don’t smell like food. 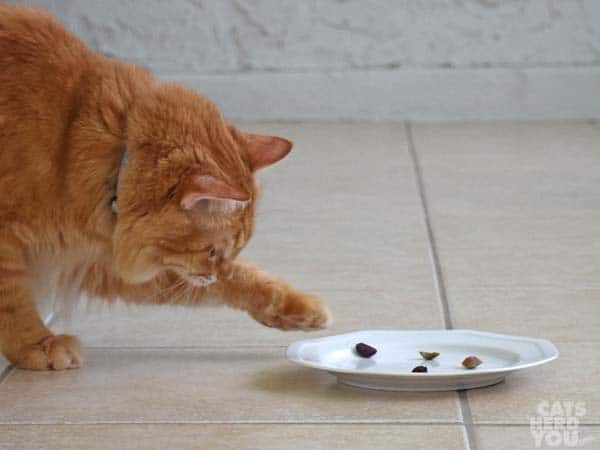 Ashton: If it’s on a plate, I think you’re supposed to eat it, not play with it.

Newton: I don’t see YOU eating it, Miss Smartystripes.

Ashton: I was saving whatever it is for you. Go right ahead. 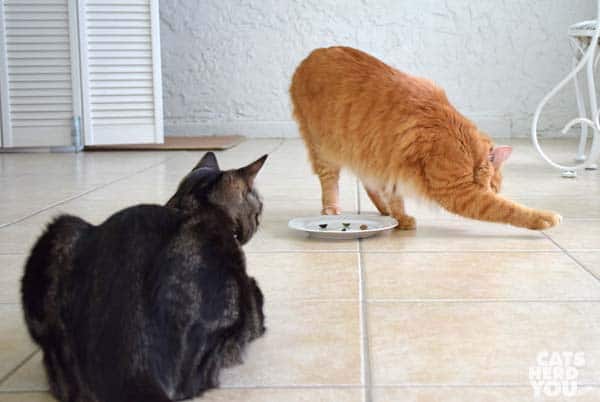 Newton: We don’t know what it is, but we’re holding out for something more appetizing. 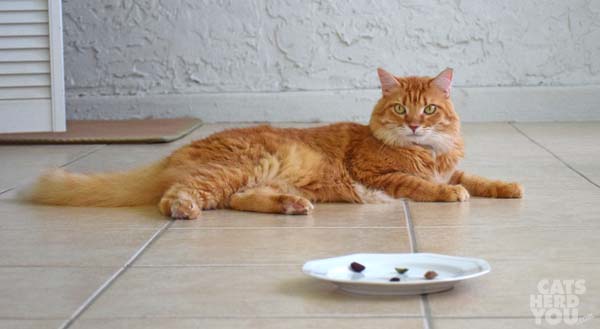 Our household test was a bit of a failure. Olives got twelve paws down here, but apparently there are lots of cats out there who really love them. Do your cats love (or hate) olives?

J Comp Physiol B., Dietary fats and body lipid composition in relation to hibernation in free-ranging echidnas
Proceedings of the National Academy of Sciences of the United States, Oleic acid content is responsible for the reduction in blood pressure induced by olive oil
Google Patents, Properties of cats’ facial pheromones US 5709863 A

A Harris Interactive poll explored how pets are members of the family, and people do things with their pets that they would their human family members. How does your household line up to these key answers? 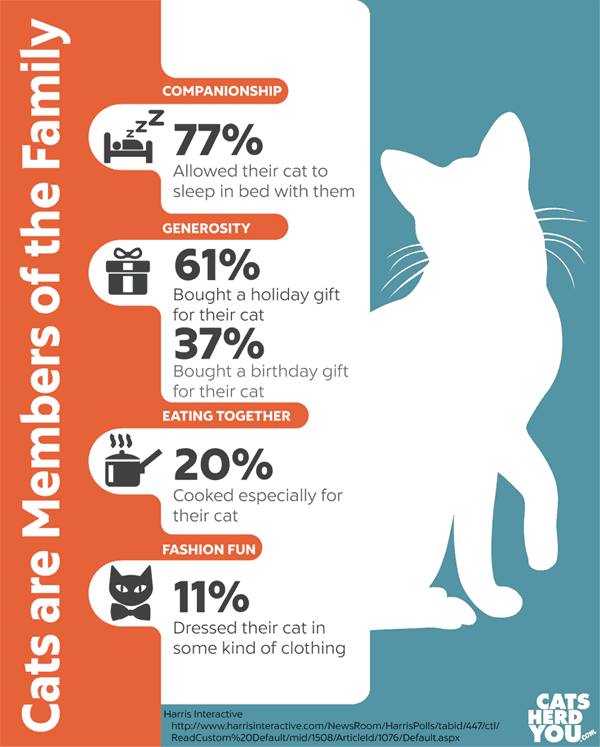