You are here: Home / Archives for Cats

When she is out on the town, Cupcake loves being in her cruiser, but certain things will get her out. Tasty things. 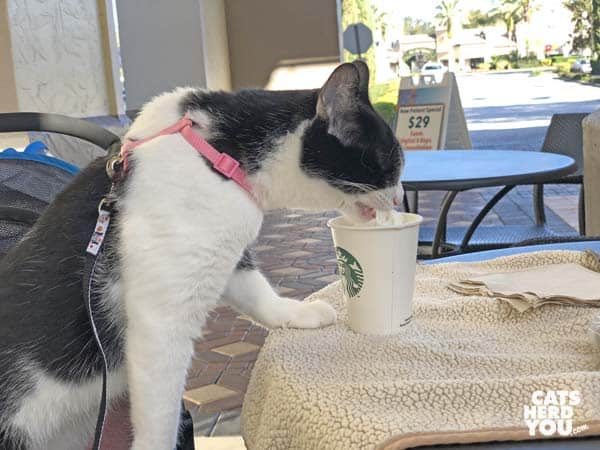 Recently, I put her on the patio floor and had her doing fist bumps for a nice gentleman at a neighboring table who wanted to know about how to teach his cat to do that. When she was done, she walked back to the stroller and discovered I had left the zip-up basket underneath unzipped when I pulled out the extension cord to plug in her heating pad. 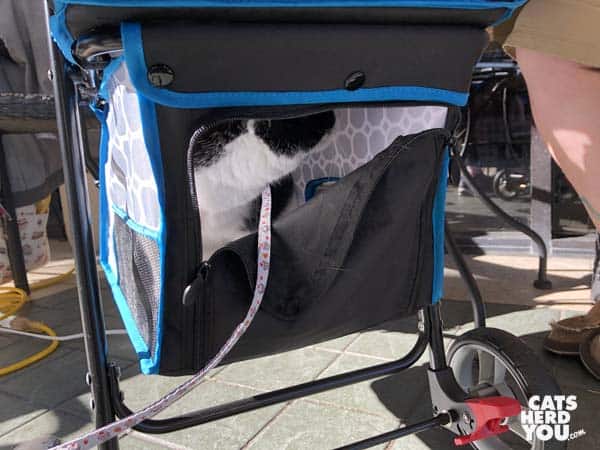 She went right inside like it was a normal place for a cat to go. Wrong level of the double-decker stroller, Cupcake! 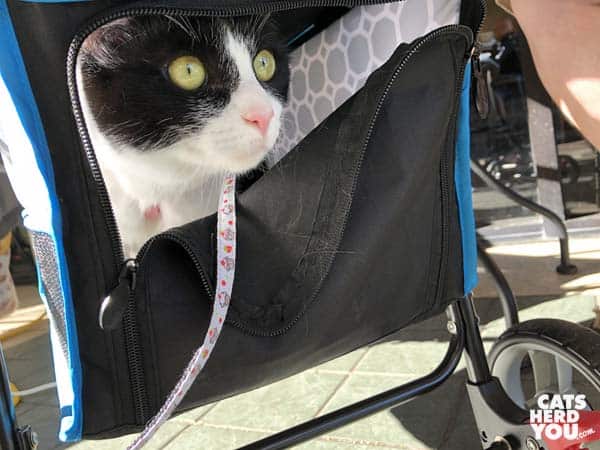 She looked around to be sure the coast was clear and the dog who had been at the next table was now gone, then she came back out and climbed into the stroller. Once inside, she cuddled up in Catmonkey’s lap and took a nice nap on the warm heated pad. 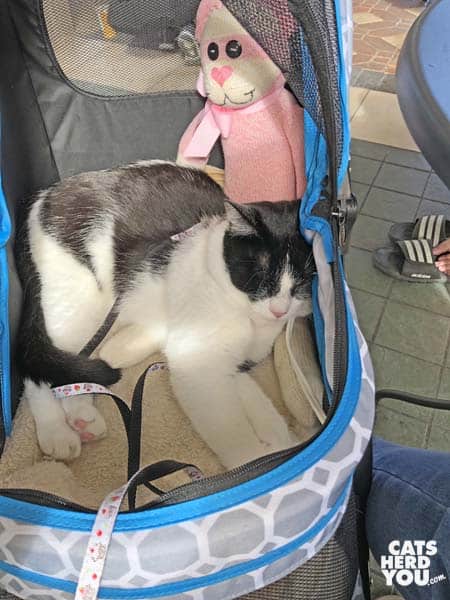 The top of the double-decker is a WAY more comfy place to be, isn’t it, Cupcake?

We thought today would be a good day to share some photos that were floating around in our “phone uploads” folder but you hadn’t yet seen.

Pierre and Monkey disapprove of your shenanigans. 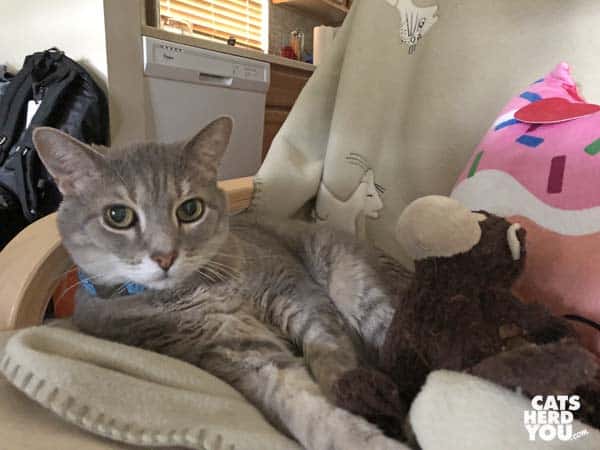 Ashton likes to use the speedbump-shaped scratcher, but she has learned that flying leaps will make it move. She really turned it into a speedbump with this placement in front of the doorway, didn’t she? And she looks proud of her accomplishment. How many unwary humans do you think she can trip with her speedbump? 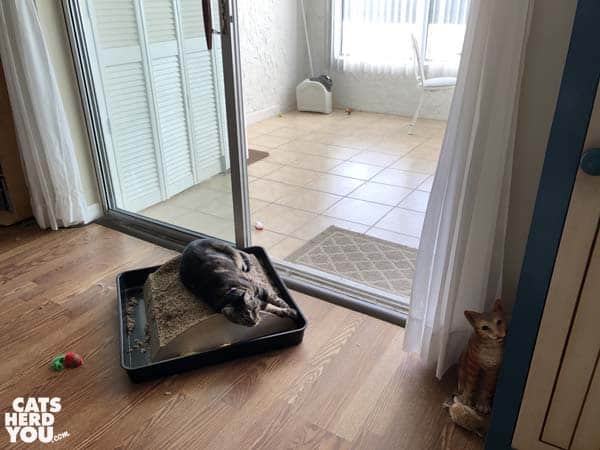 Where we live, there are native lizards. This isn’t the kind of lizard that scampers across our window screens, but he took great interest in Cupcake when she wanted a closer look at him during an outing to the pet store. They had to stay on opposite sides of the glass, so their romance is unrequited. 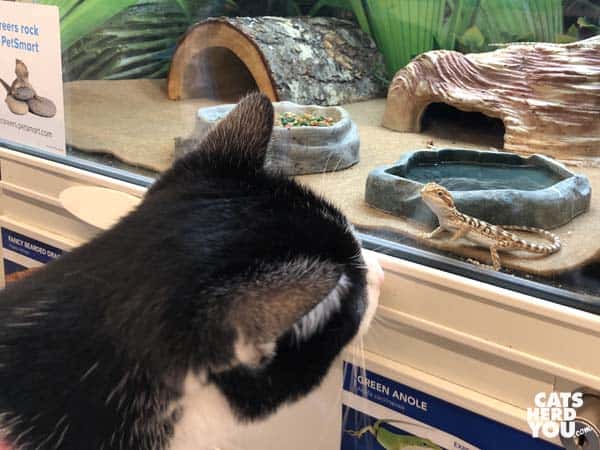 Who does this wall hanging look like? Cupcake says she doesn’t know any kitty who looks like that! Miss Jeanne from Random Felines, who fostered Cupcake when she was a wee kitten, sent it to us, and it is hanging in our kitchen. For those of you with OCD, yes, the nail it hangs from was later  moved higher so it doesn’t hang down into the doorway. 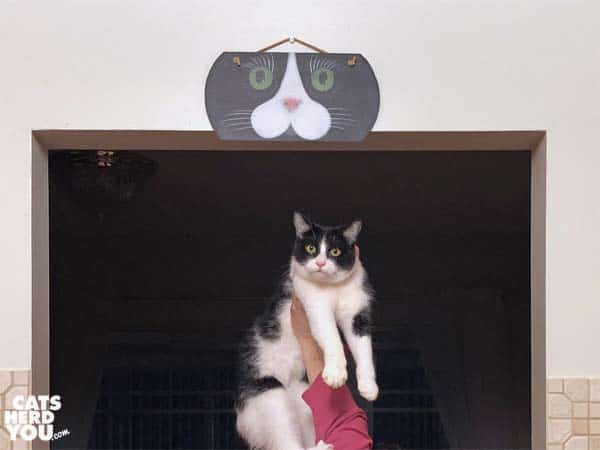 Pierre and Newton are holding a meeting on the cedar chest in their respective beds. No girl kitties allowed at this exclusive meeting!

Cupcake and Catmonkey are now best friends, and they share all kinds of adventures together during their outings. 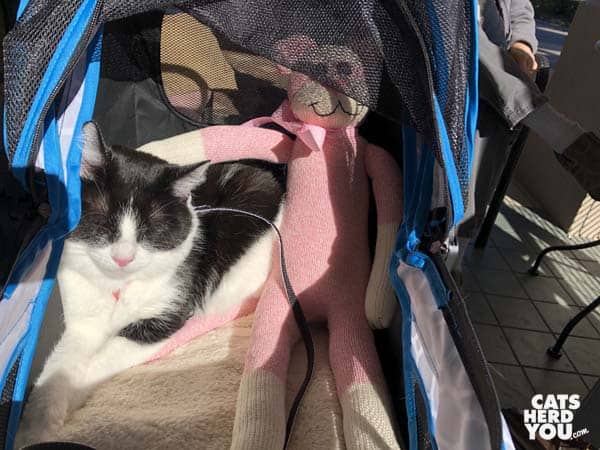 They even go shopping together in the pet supply store. 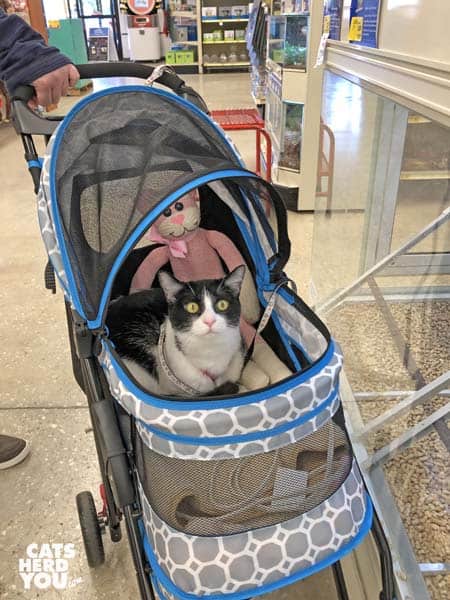 Cupcake: Look, Catmonkey, birds! Do you think we can take one home? 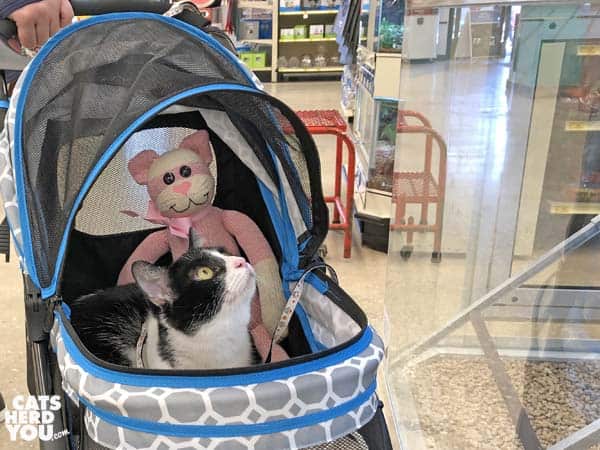 This week, they attended our human’s birthday party on the coffee shop patio together, too. 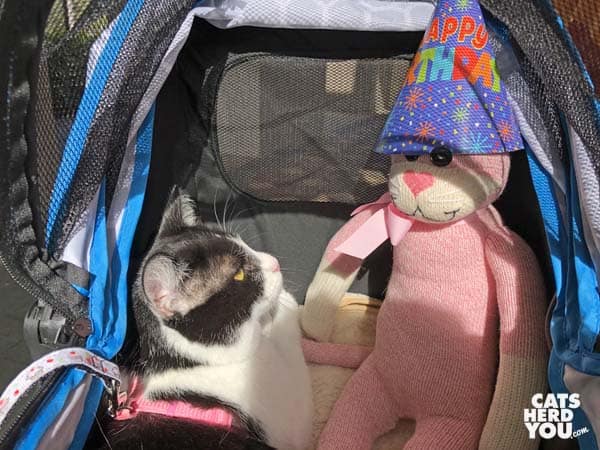 Cupcake: It’s good to have a friend to do things with.

For the Christmas holiday, we participate in a gift exchnage with other cat bloggers called Secret Paws, and we opened our gifts on Christmas morning with the rest of the family. We rceived gifts this year from Buckwheat at Phin, Feather and Fur Gang.

Pierre took charge of the operation.

Pierre: Buckwheat sent us a BOX! This is awesome! 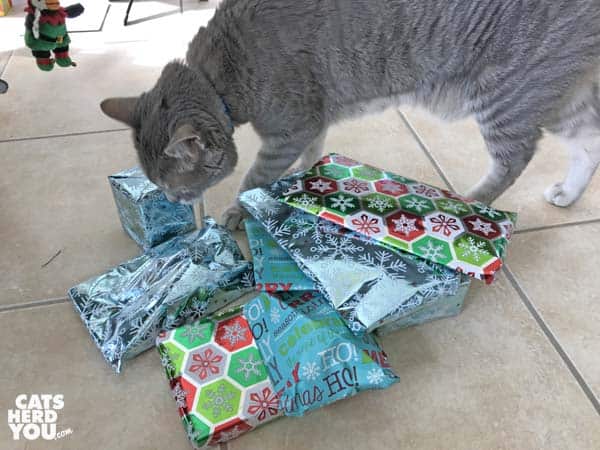 Pierre: I love sushi a lot.

Pierre: I’m going to pick out my own piece of sushi. 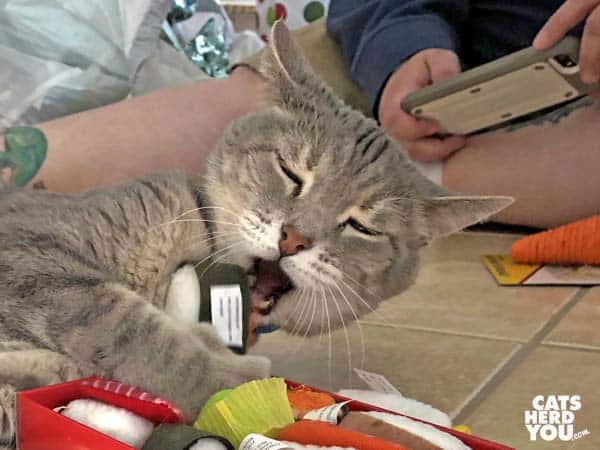 Pierre: Why are you laughing? You’ve never seen a cat eating sushi before? 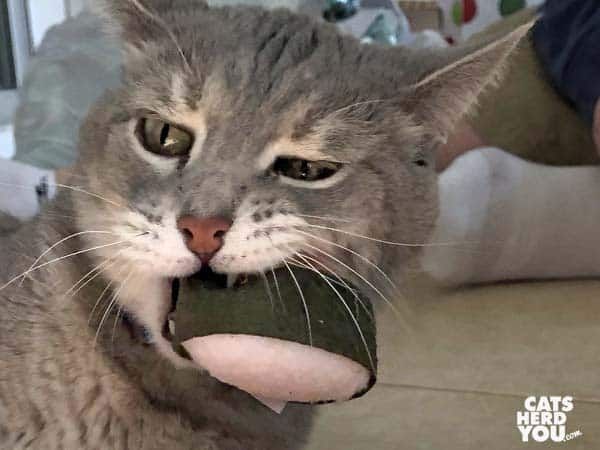 Cupcake: Stop fooling around, Pierre! The tasty stuff is over here. 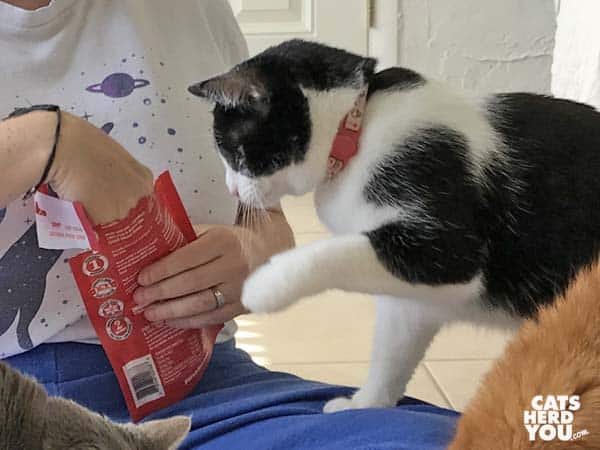 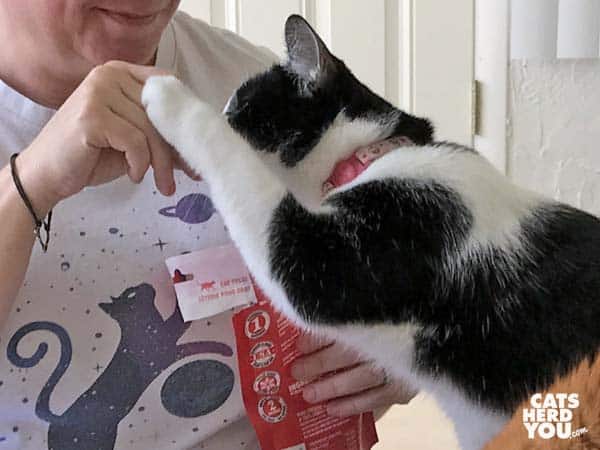 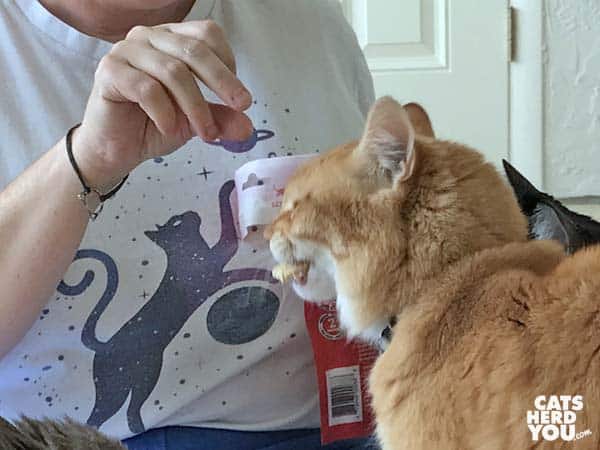 Ashton: I love chicken more! Bring that over here where I’m hiding under the tree. 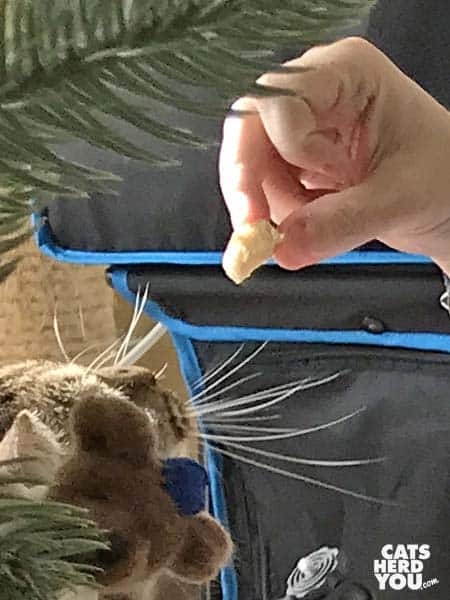 Cupcake: We got feathers! I can tear these off for sure. They smell wonderful with catnip. 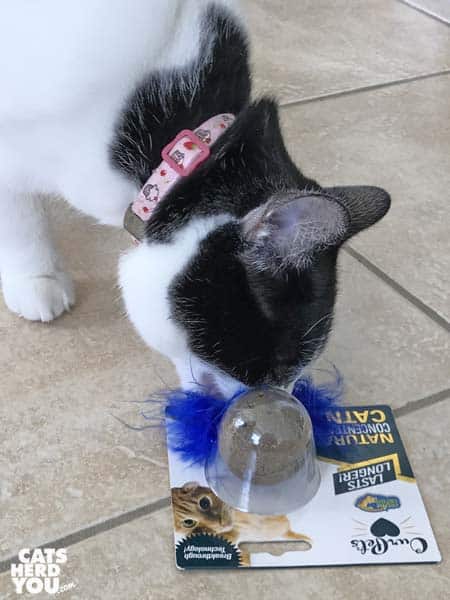