You are here: Home / Archives for big cats

I recently had the opportunity to tour Big Cat Rescue. They now function as a rescue sanctuary, and their property  is a collection of “catitats”, mostly large, oval enclosures, linked with tunnels so that the cats have choices of areas to go. All of the cats have den areas, trees to climb, and if appropriate for their species, tall grasses and other foliage to hide in. 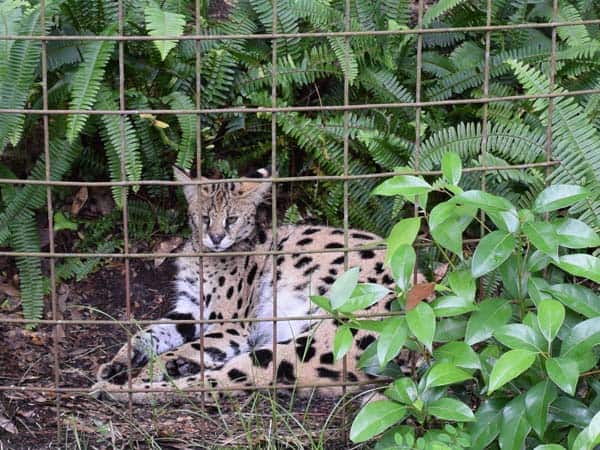 One of the things that a lot of cat lovers will notice in my photos is that all but one where I got a shot of a fairly distant cat have bars in front of the cats. Big Cat Rescue is a no-contact facility, and even their staff have no contact with the cats except for blood draws through the side of a lockout cage or while the cats are under sedation for more extensive care. 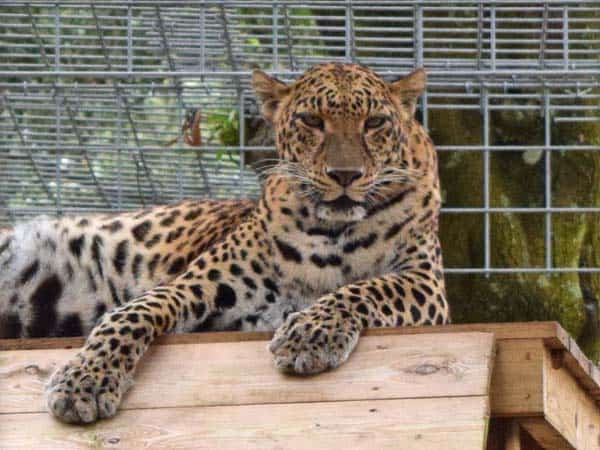 We toured the property, and one of the senior keepers talked about the cats. What struck me about her stories about the histories of the various cats was how many of the cats were given up for the same kinds of reasons that we hear of domestic cats surrendered to animal shelters: divorce, people moving to locations they can’t keep that kind of pet, not using litter/spraying, even being too expensive to keep. They have cats who were brought to vets for care and abandoned there, and even one who was brought to them for boarding and the owner never returned. How can anyone familiar with domestic cat rescue not see the similarity to the reasons for surrenders?

Additionally, they have rescued cats from failed zoos, retired circus performers, and even an unknown hybrid guessed to be similar to a F1 Savannah Cat who was unexpectedly trapped on Feral Cat Day a few years ago and was more than a local animal control knew what to do with. 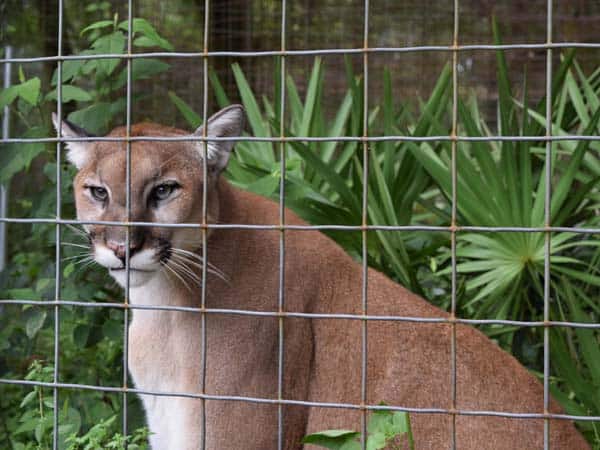 Walking through Big Cat Rescue, of course it was a little sad to see these cats in enclosures rather than in the jungle or on the savannah. But captive-bred, these cats don’t have the instincts they need to go out and hunt for themselves. Many of them were declawed by their previous owners or suffer from ailments brought on my poor nutrition or inadequate vet care before they arrived at Big Cat Rescue. Many others are seniors, suffering from age-related ailments like cataracts and arthritis that we see in our own domestic cats as they age. These things make it impossible for the cats to safely fend for themselves. But at a sanctuary, they are safe and cared for by the staff and a small army of volunteers. 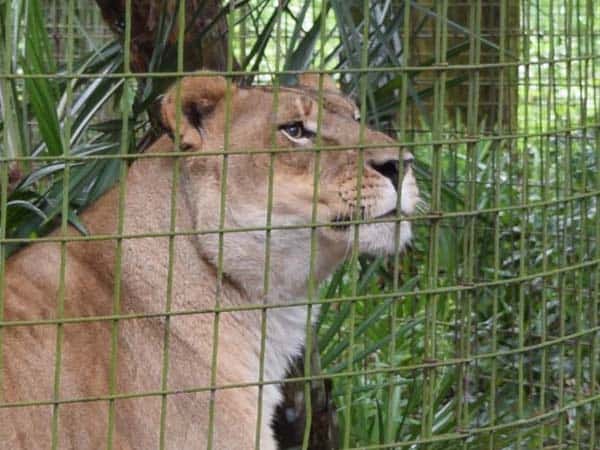 While Big Cat Rescue has only a handful of full time employees, they get a lot of their help through their volunteer program. I met senior keepers who had been volunteering there 11 and 12 years, respectively, and they obviously viewed each of the cats with both affection and a great deal of respect.

Part of our tour was getting to watch operant conditioning of the big cats, which is a fancy word for training. The cats are taught to present paws, stand up, and open their mouths. They aren’t asked to do tricks like roll over or play dead. The behaviors they learn are to help it to be easier to check on their health daily. The big cats get raw meat treats on the end of a stick for responding to the hand signal since the facility is completely hands-off with the big cats. 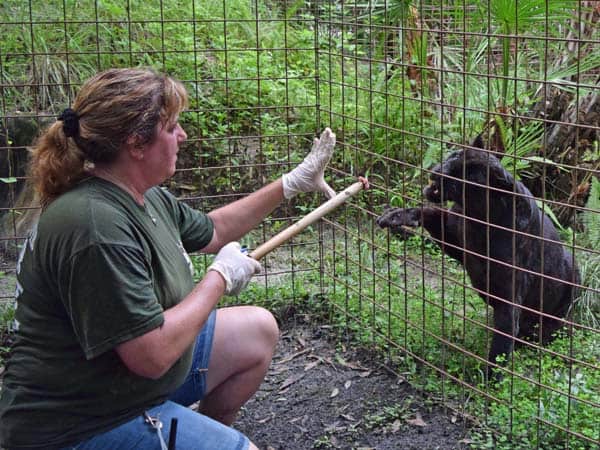 The sanctuary also has a thriving internship program. One intern I talked to had an Environmental Sciences degree and was going into his tenth month of internship. In addition to helping care for all of the big cats, the interns also care for little ones. A partnership with the local animal control has the interns of Big Cat Rescue caring for neonatal kittens until they are an adoptable age, then they return, fully socialized, for adoption.

During our tour, the keeper distributed enrichment items like cardboard tubes full of spices and catnip for the cats. Yes, big cats like catnip too! One of the surprising things that was a big hit with some of the cats was the cut off top of a pineapple. 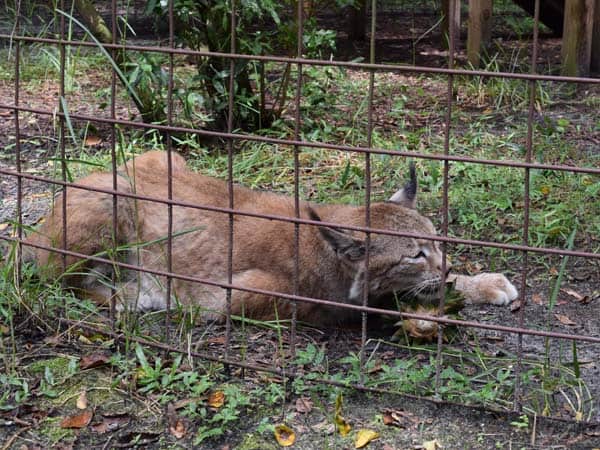 I also stayed for the feeding tour, which gave a lot of insight into the staggering cost of feeding a big cat. It was also really touching to see the keepers taking extra time with some of their senior cats to make sure they ate their whole meals. It reminded me of feeding time with my own senior cats over the years. 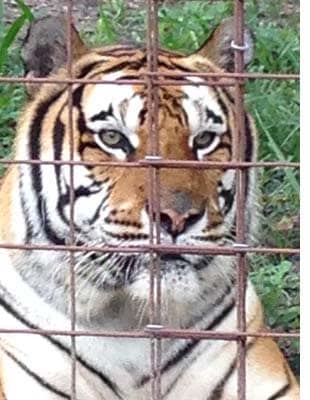 The whole experience of visiting Big Cat Rescue was much more thought-provoking than I had expected. While the tour and the sanctuary carries a strong message of not trying to keep big cats as house pets and opposing the breeding and trade in big cats, that wasn’t what struck me most. What I noticed most was how similar the issues of big cat rescue are to domestic cat rescue. The primary difference is that people are breeding big cats for profit, while little cats in the community breed on their own. The result is the same: too many cats for the number of knowledgeable homes able to take them in. I’m glad that there are sanctuaries for big cats the way that there are a handful of sanctuaries for some less-adoptable domestic cats. Neither may be the ideal home for them, but it’s good to know that someone who loves them and cares for their needs.

If you are ever in the area, it’s a fascinating place to visit, both through the lens of cat rescue as a whole and as an opportunity to see how they care for rescued big cats.