Those of you who follow us on social media probably heard last week that Pierre got to visit the vet last week. He wasn’t really thrilled about the whole thing. 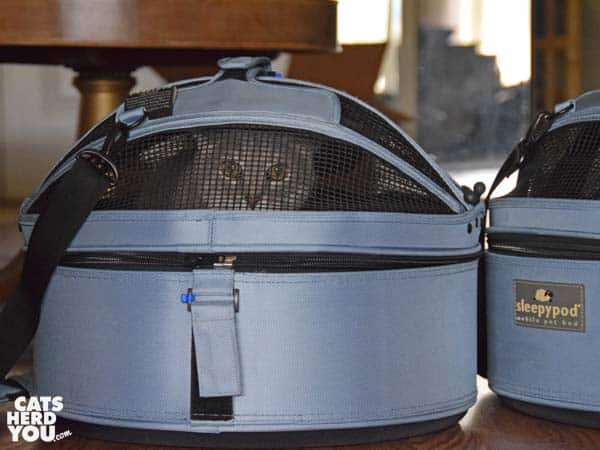 This was an urgent visit despite Pierre’s protests. His constipation, usually controlled with the addition of some pumpkin to his diet, had gotten worse and was causing vomiting outside the litterbox when he tried to go.

Ashton was due for her wellness visit, so she accompanied him for the trip to the vet.

Ashton: This is NOT funny. You’re in so much trouble for making me do this, Pierre. 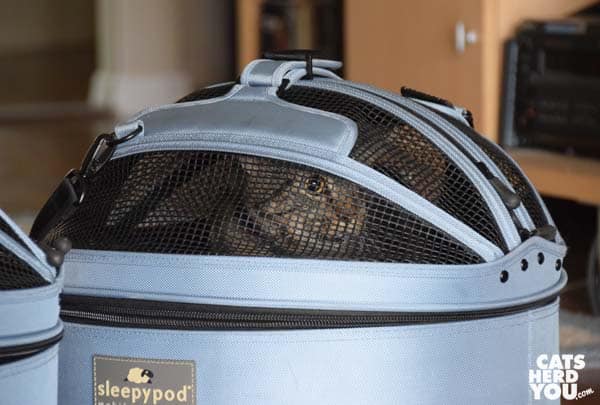 Pierre and Ashton sang the song of their people all the way to the vet. We’re fairly sure that even with the car windows rolled up, drivers in the surrounding cars heard them at every stoplight. (If the video doesn’t display below for you, you can visit it directly to hear their song.)

At the vet, Pierre really wasn’t interested in coming out of his carrier to be examined. 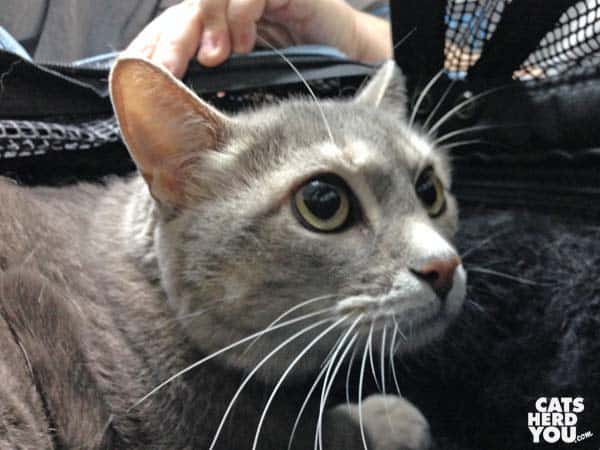 He was diagnosed with constipation and scheduled for an enema. The vet suggested that he stay with them for a few hours since the results were usually pretty messy, and that he would be able to go home later in the day.

Ashton: Can’t you keep examining Pierre so that I don’t have to come out there? 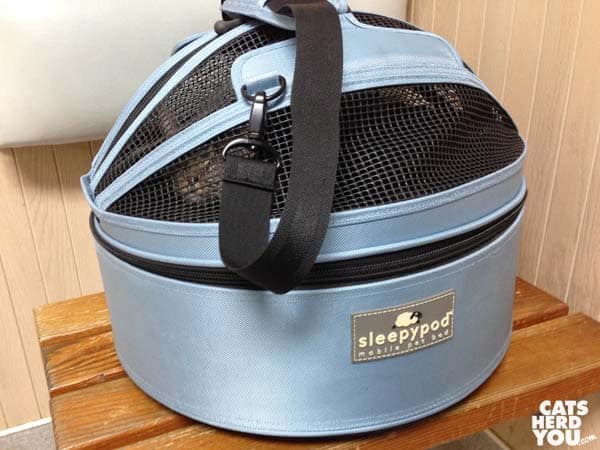 Ashton had her annual exam, which was uneventful except for the vet warning that her bladder was kind of full. Worried about Pierre, we didn’t pay too much attention to that comment. As we carried her carrier back in the door, Ashton’s bladder couldn’t wait any longer. The dense humans, without a cat’s keen sense of smell, didn’t realize this until we opened the carrier and out sprang Ashton, the fur of her whole back end wet.

There are no photos of the chase over all of the furniture in the house that ensued, so you’ll have to use your imagination. It was, however, epic.

One of the awesome things we love about the Sleepypod carrier is that it’s not just super-plush for the cats, it’s also easy to clean. The innards of the carrier went right into the washer with the bed comforter and other things that suddenly needed to be washed, and they came out April fresh.

By the time cleanup was mostly done but Ashton was still hiding under the bed, the vet called to say that Pierre had gotten his enema, but he was refusing to use the litterbox at the vet. The vet suggested he would be more relaxed at home and would use his own litter box.

Pierre looked very glad to see a familiar face at the vet and went right into his carrier. We set out for home and were nearly there, only a few blocks away, when Pierre couldn’t wait for the litter box any longer. Unlike when Ashton went in the carrier, there was no mistaking what had just happened. Pierre, ever the tidy cat, tried to rearrange the incontinence pad we had added to the bottom of the carrier for just this situation, trying hard to bury the evidence. So when we got him the last few blocks home and into the house, he went into the bathroom carrier and all to assess how much mess there was.

There are no photos of this part of the story, either. In his effort to be clean, he had managed to get it all over his feet. So in addition to all of the other indignities he had suffered, Pierre had to have his paws washed before he could be allowed back into the house.

Pierre: You’re not going to publish a picture of my wet paws for people to see, are you? So humiliating! 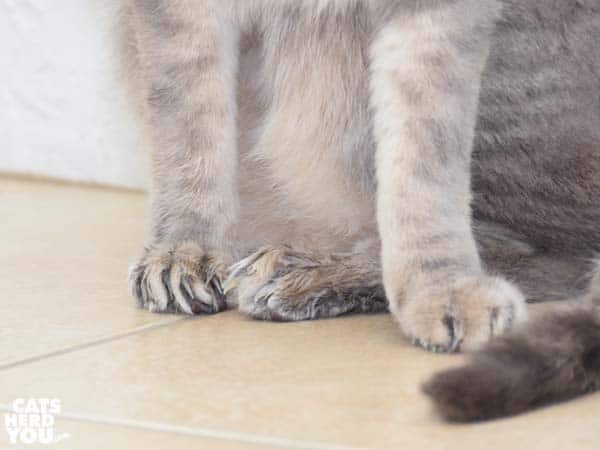 Afterward, he had a little bit to eat and then went to hide in his kitty kozy.

Pierre: I never want to go through any of that again. 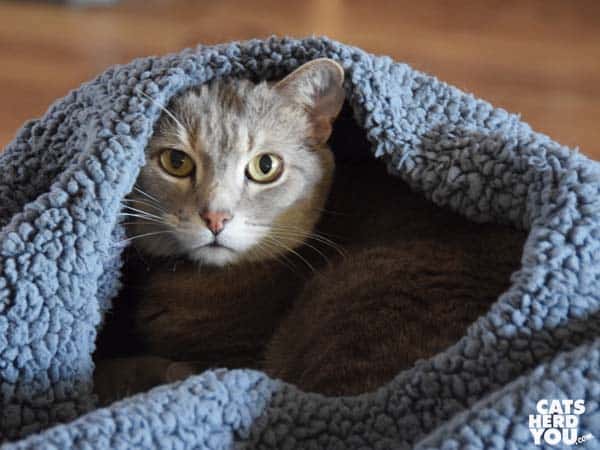 Neither do we, Pierre.

The good news is that Pierre feels much better now, and we have a plan to help him keep feeling that way.

This whole experience taught us that it’s important to always know how often your cat is using the litterbox. When you have three cats, it’s sometimes difficult to know who leaves what, so you have to keep an eye on them. In our house, Pierre is the only cat not eating raw, so we can usually tell which ones are his at scooping time. When we stopped being able to tell them apart, we suspected there was trouble.

PetMD lists these as additional symptoms of constipation:

If you think your cat is constipated, see your vet both so that your kitty can feel better and so that your vet can try to identify the cause of the constipation, since it could signal another underlying condition.