Last week, Pierre wasn’t feeling so good. He went from his bright, happy self one day to depressed and sick the next, and we were worried about him. 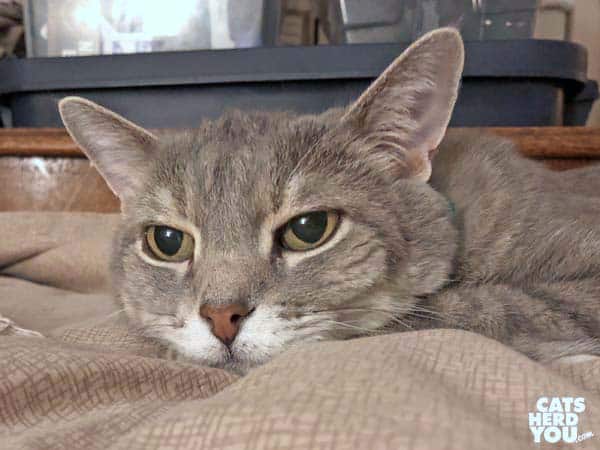 Of course, he got sick on a Sunday. It’s Murphy’s Law that your cat will get sick on the one day a week your vet isn’t open. He wasn’t so sick that I thought he needed the emergency vet, so first thing Monday, we headed to the vet.

Add to Murphy’s Law that not only when your cat gets really sick it’s the day your vet is closed, the next day, both vets at the office that takes care of your cats, too. Pierre saw the fill-in vet, who I had never met before. He got fluids, vitamin B, and the vet sent us home an antibiotic for his gastrointestinal issues.

But he didn’t get better. He got worse. The next day, we were back at the vet. This time, they drew blood for testing and took a closer look inside him with an X-ray. When the vet was concerned about what she saw in his stomach in the X-ray, and she wanted a second opinion from a radiologist, I started to get really worried. The radiologist said it wasn’t a mass, probably lots of foam from him being sick for days on end. Whew.

A relief for my worry wasn’t a relief for Pierre. The vet wanted to keep Pierre for the day on IV fluids to try to get him feeling better. I watched as they shaved his leg and put in the IV catheter. He didn’t growl or protest, and he barely needed to be restrained. This was hardly the cat I knew. 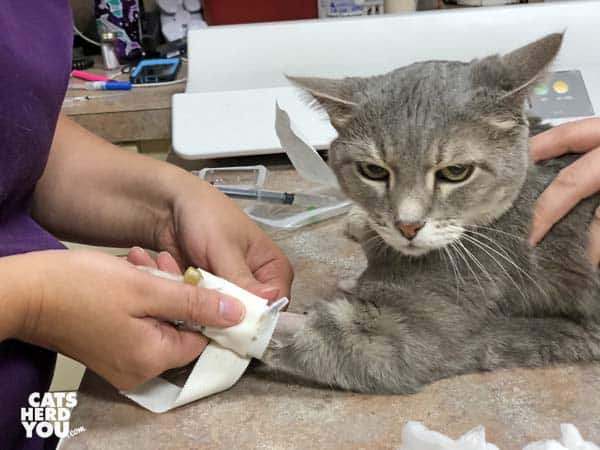 While Pierre was spending the day hanging around with this friends at the vet, they ran a urinalysis. He had a urinary tract infection! This didn’t explain all of his symptoms, so it had to be treated on top of everything else.

The vet was great about calling me with updates. Four of them during the course of the day. But it still seemed like a very long day to me. I suspect it seemed even longer to Pierre, who is a timid cat and doesn’t like strangers, strange places, or strange things.

When he finally was released to come home, he came home with one of those strange things on him. The IV catheter was carefully bandaged over with a very sporty leopard-print bandage in case it was needed again during the week. Just the fact that they thought they might need it again was really sobering. He climbed up on the sofa onto Cupcake’s catghan and didn’t want to be bothered after his long day. 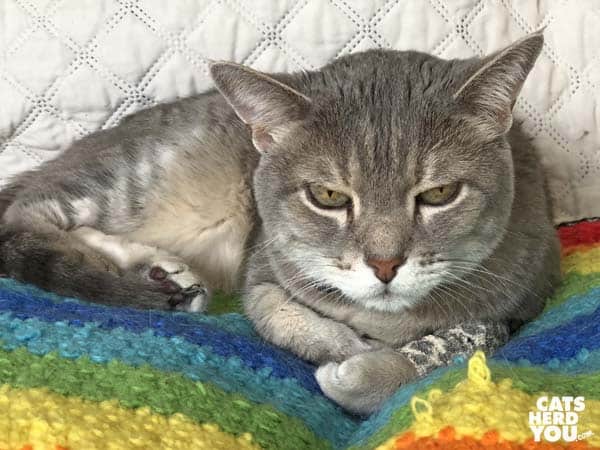 The next morning, it was time to start a new medication regimen for him. 4 morning medications, three of them in pills.

He still had no appetite, so he wouldn’t eat them in pill pockets. So I tried to get the pills into him the good old fashioned way. And tried. And tried. I finally had to call the vet’s office in embarrassment and tell them that although I have given literally thousands of pills to cats in my life, Pierre had defeated me.

So it was back to the vet again to be pilled.  He may not be eating yet, but every car trip, his protests got louder. The vet’s office called in his medications to be compounded into liquids. He’s not a fan of those, either, but at least I could get his evening medications into him without having to take him back to the vet for him to take them.

By the end of the week, Pierre had accumulated lots of frequent flyer miles on his trips back and forth to the veterinarian. He had to go back one more time to have the catheter removed from his arm.

This time, he figured out he wouldn’t be found if he hid under the towel in the bottom of his Sleepypod carrier.

Has anyone seen Pierre?

Pierre: Is it working? 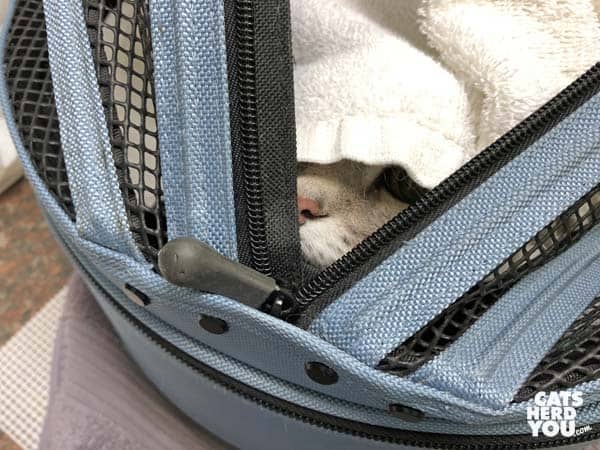 It’s a good thing it didn’t work, because Pierre was clearly glad to have that catheter out of his arm after his appointment. The best thing about this appointment to vet was that everyone could see that Pierre was starting to feel a lot better, finally. He has been improving a little every day since, too.

Last week was a really long week for all of us, and we’re so glad to have our grumpy gray cat back feeling like his feisty self again!