You are here: Home / Safety / This is Only a Drill

This time of year, when you live in Florida, it’s important to keep an eye on the hurricane map and be prepared. And there has been a lot going on there on the map! 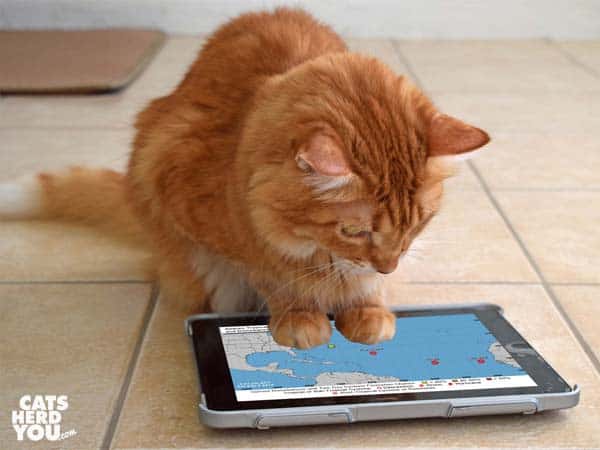 We live in the center of Florida, which is where the people from the coast evacuate to during big storms, so our chances of having to evacuate for a hurricane aren’t high. We are more likely to need to be prepared for brush fire season in the winter. Either way, it’s important to be prepared.

I recently repacked all of the travel/evacuation necessities into a big, plastic bin, and that got me to thinking: can I fit this, all the cats, and two humans in my  car? I have a small car because I don’t like driving a big one, but this is one time it could be more of a liability. I needed to do a drill to be sure the bin and carriers would all fit in my car.

The carriers we use most often for vet trips are the Sleepypod mobile pet beds, which are bulky. I can’t put three of them in the back seat. I’m not sure you could fit them in a larger car or SUV that way, either. But the cats treat them as beds around the house, so they would be the fastest thing to grab in an evacuation. I had to figure out how to fit them in the car.

Cupcake usually rides on her outings in a smaller, more traditionally-shaped carrier, so I needed to include one of those in the packing plans, too. Without a passenger, I could fit one Sleepypod in the front seat and secure two secure in the back seat with Cupcake’s carrier nestled between them. But I needed to keep the passenger space clear for this simulation.

With that in mind, I put down all the seats in the catmobile, which reminded me that my tiny car has more space than it looks like inside. This might just work, I thought.

I started putting the bin and empty carriers into the car. 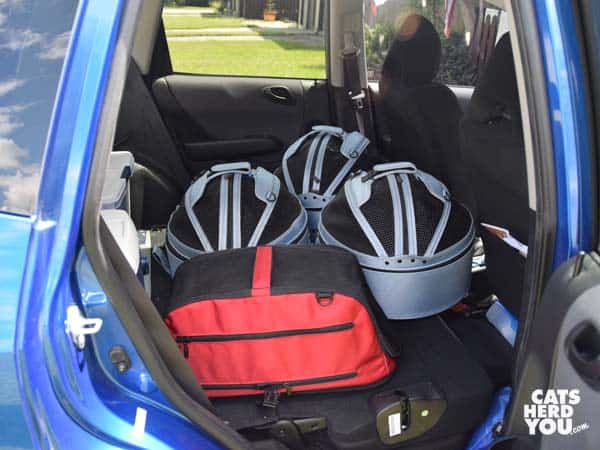 The front carrier is partially sticking off the end of the cargo area in the photo above, but there was enough space to shuffle them around and get it safely supported.

Behind the carriers, I was able to easily fit the bin of cat evacuation necessities, a small cooler, and a piece of luggage. In an actual evacuation, we would be taking a lot more than a small piece of luggage, and I mentally reserved space for important things like computers I wasn’t going to bring out into the driveway during this drill. 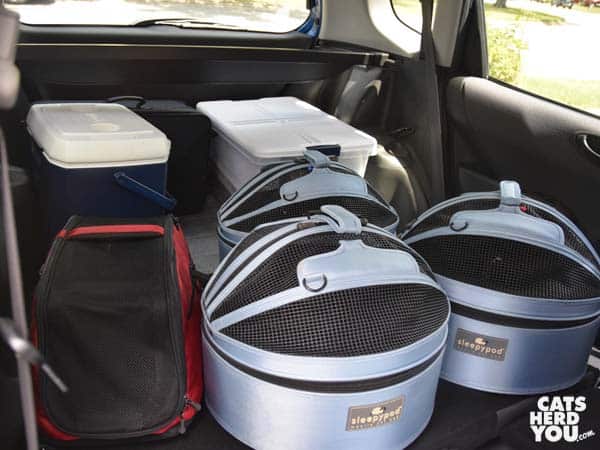 The exercise successfully proved I would have plenty of space without needing to bring the old, plastic carriers down out of my attic.

If you have never taken all of your cats in the car at once, it’s worth taking a few minutes to ensure that you can fit them all in somehow in case of emergency. I’ll sleep better knowing I don’t have to rely on someone with a bigger vehicle help me evacuate in case of emergency. 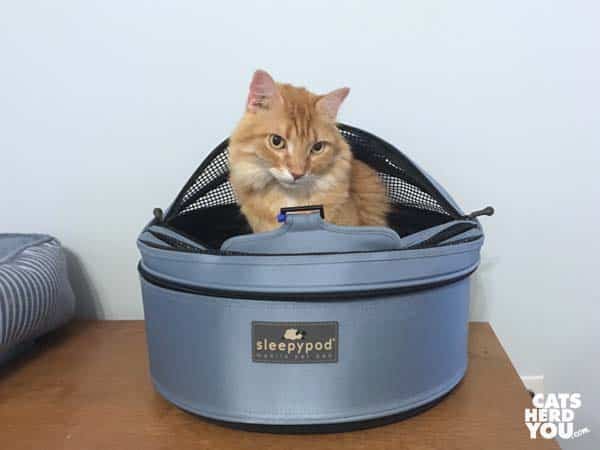