You are here: Home / Tourism / The Closest Cat Cafe to Walt Disney World

Orlando has been waiting eagerly for a cat cafe for a long time, and it has been a long time since the original groundbreaking and open house party for the Orlando Cat Cafe. But the wait is over, and I was fortunate to visit the cat cafe near Walt Disney World less than a week after it opened. 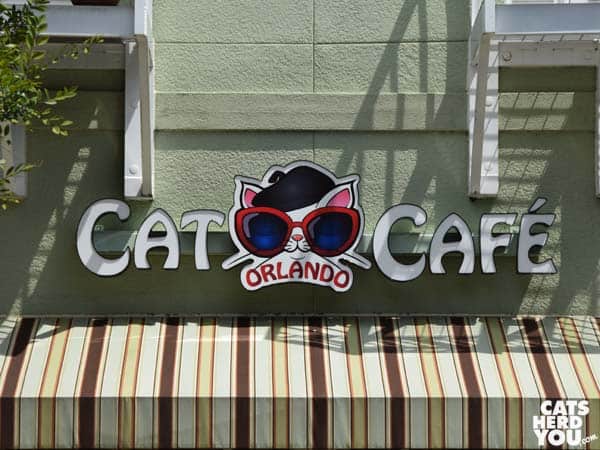 The first confusing thing about the Orlando Cat Cafe is that you don’t enter through the cat cafe itself. That door on the front is sealed to prevent escaping cats. 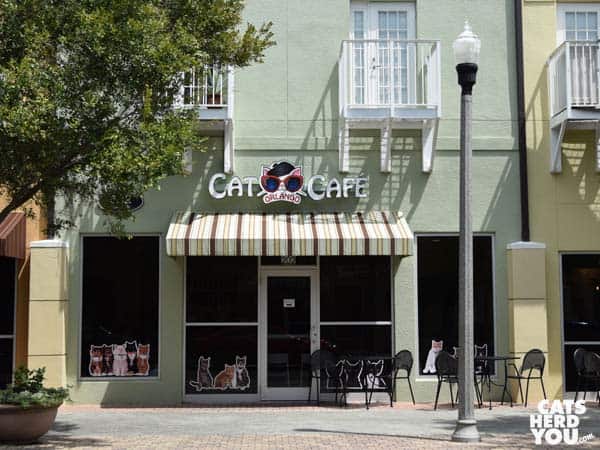 Instead, you enter through Axum Coffee, next door. At first glance, Axum looks like a regular coffee shop inside. 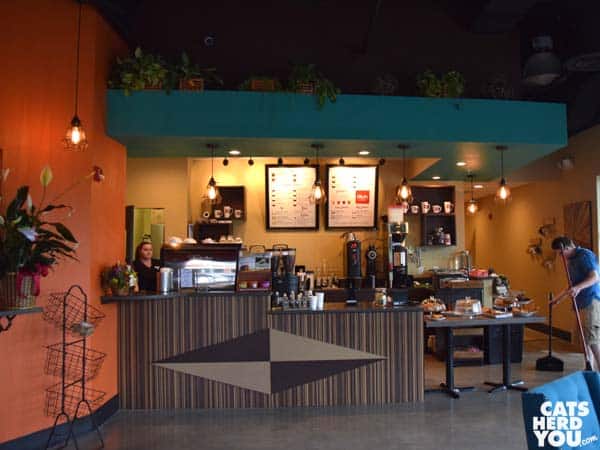 But you quickly notice a large window into the storefront next door where the cats are. 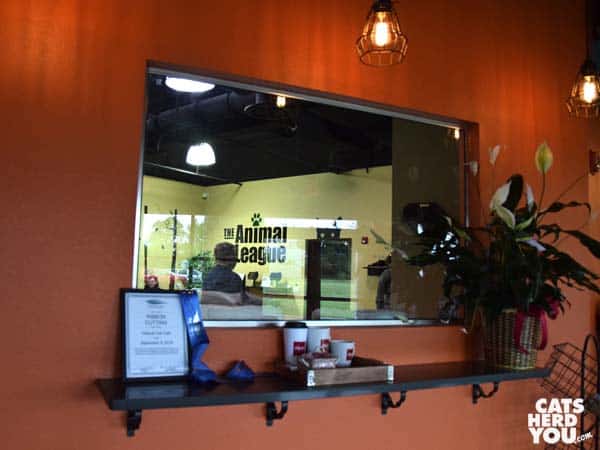 After you pay for your entrance at the coffee bar, you get a sticker to wear that identifies your assigned time with the cats. When it is your assigned time, you enter a door into vestibule between the two storefronts. The door is so close to the front of the coffee shop that it is hard for the staff to control access to it while also tending the coffee bar. That probably wasn’t thought out as well as they hoped.

Once you enter the tiny room between the two storefronts, you get instructions from a staffer from South Lake Animal League about the cats: no chasing, no picking up, no flash photography. 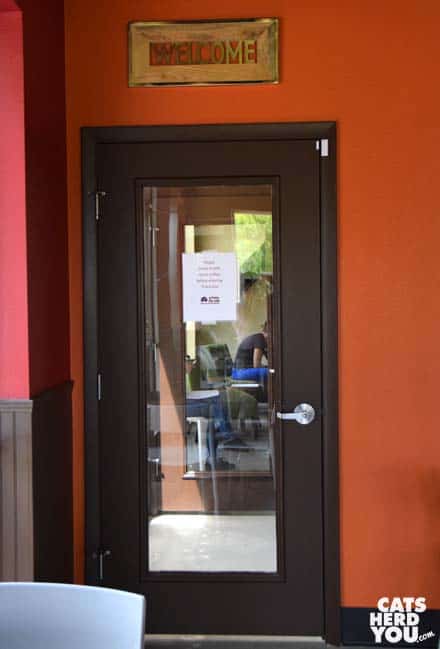 After I entered the cat area, there was a nearly-immediate demonstration of why they used the vestibule for entry and exit as a Siamese-type cat who was in the cafe made a break for the door only to be caught by the staffer. 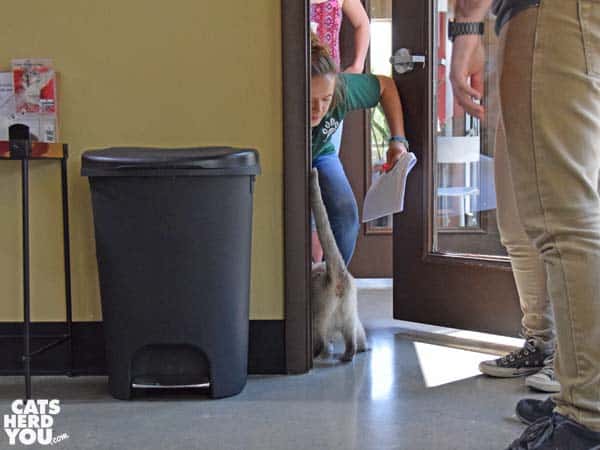 For anyone who wasn’t listening carefully, the rules of the cafe are posted on the wall inside, too. 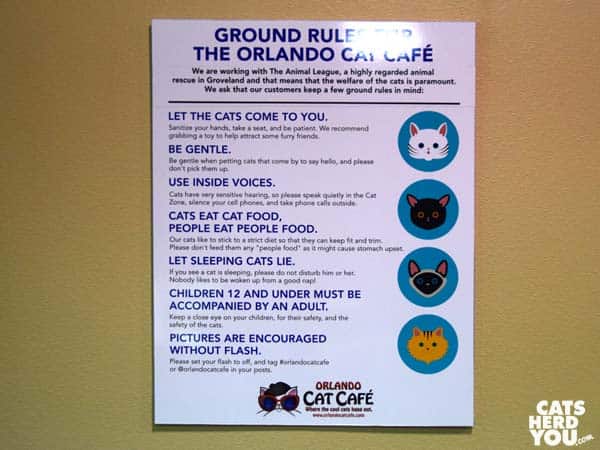 The cafe serves as an off-site adoption center for the South Lake Animal League, so they provide a way to sign up for newsletters from the organization on site. 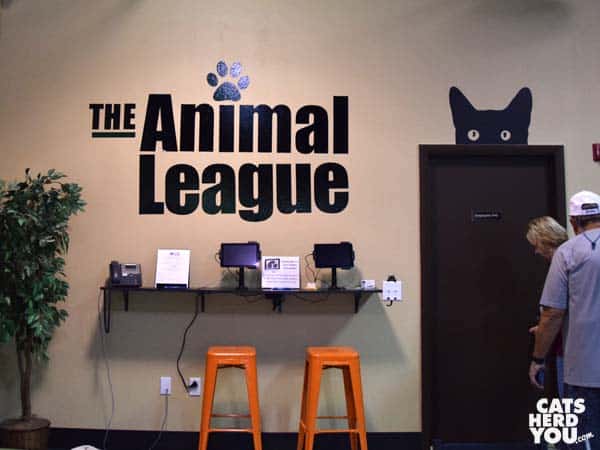 There is also a bulletin board that tells you more about the adoptable cats currently in the cafe. There were two cats who had just arrived, and their fliers weren’t up yet. 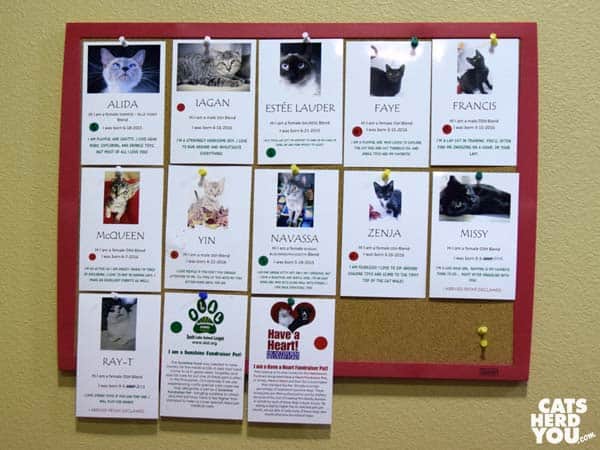 Cat litter is tidily kept out of sight in a staff-only area, and cats can access it through a cat door. I’m not sure why the symbol for the male cat has no eyes. Maybe he is mid-blink. 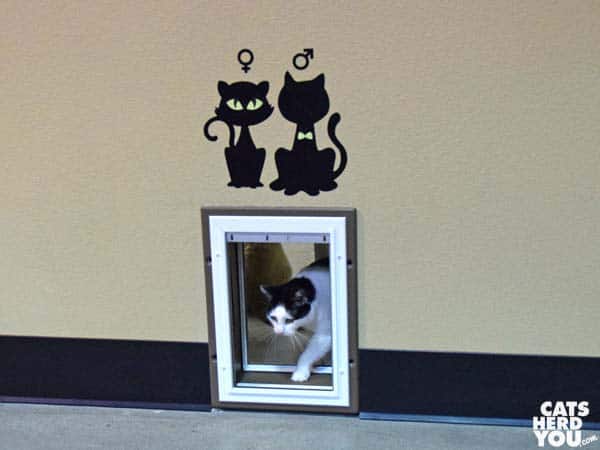 The place makes really good use of vertical space on the walls, with walkways, shelves, and cubbyholes mounted directly to the walls to make space for the cats to rest or observe. 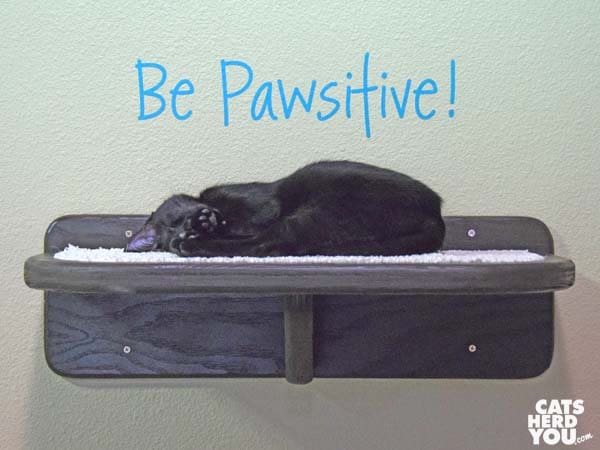 There were also some very nice cat trees scattered around the room for the cats to climb. This little guy really wasn’t sure about making the leap down to the next level of the cat tree. 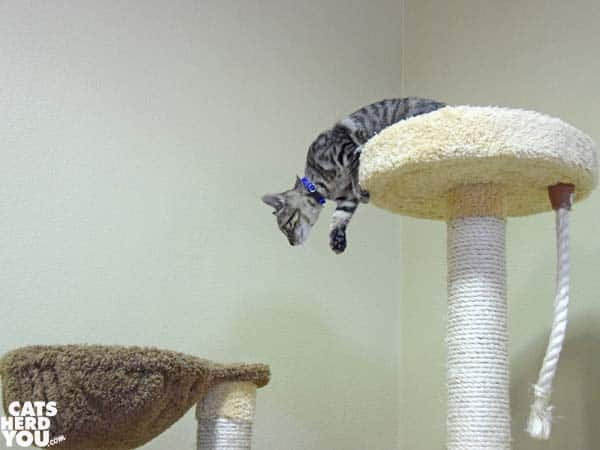 Since it was mid-afternoon, I caught a lot of cats during naps.

While I was visiting, a volunteer from the animal rescue league arrived to give the staffer on site a lunch break. The volunteer was a retiree, and I thought it was interesting that she was wearing a “Team Dog” t-shirt. Thankfully, the cats couldn’t read to be offended by it. 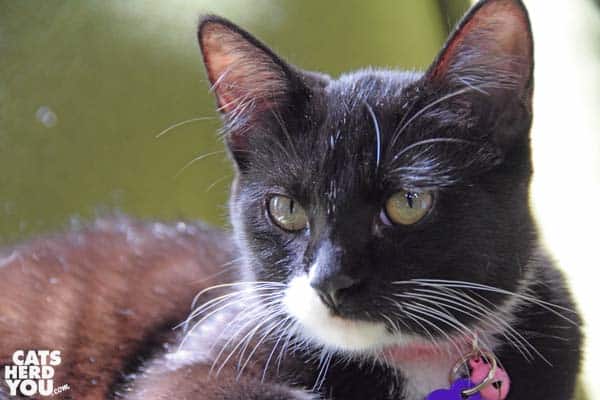 While I was taking a photo of this kitten, a retired woman with no sticker indicating she had paid to be in the cafe let herself in the door. As I mentioned above, the location of the entry door isn’t well-controlled in the coffeeshop, and that makes it fairly easy for someone to wander in. The retiree asked the volunteer if she had to pay if she just wanted to look around. “If you’re going to stay,” the volunteer replied. 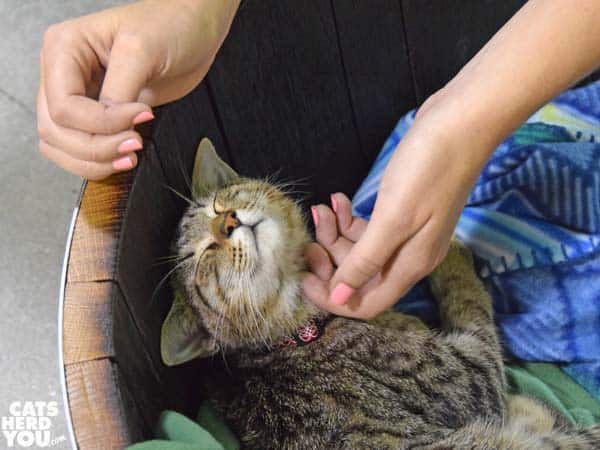 A moment later, the retired lady asked, “So are they all declawed and everything?” It’s a good thing my back was to the conversation, because I am sure my expression wasn’t neutral. The dog-shirted volunteer said something about only if they arrive declawed. What a missed opportunity for education!

The retired lady wandered out and I continued taking photos. A few minutes later, she was back, this time with her husband, who also didn’t have on a sticker indicating he had paid admission, either. They circulated around a few more minutes before leaving. I’m sure the newly-opened cafe will find a better way to monitor the entrance door, or work with the volunteers on how ask people to leave who haven’t paid their fee, but it was interesting to see the early growing pains of the place. 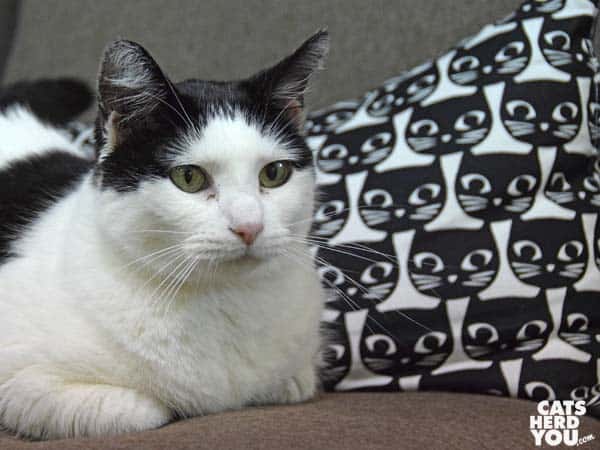 The original staffer emerged from the back room a little later, and I took the opportunity to ask her about whether they had seen adoptions from the cafe yet. “We’re still going through lots of applications,” she told me. 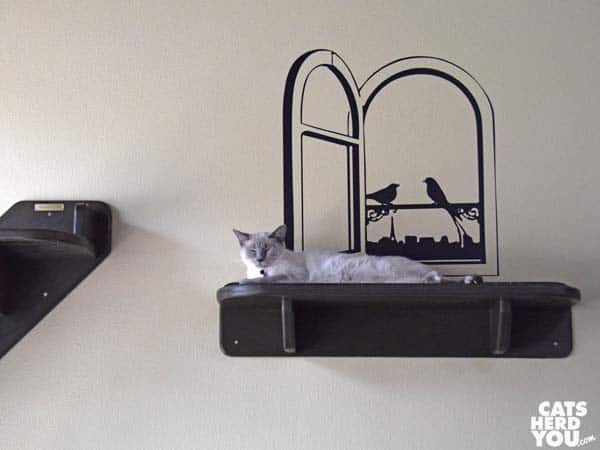 I think this could become a valuable adoption location for the rescue organization, and I recognize that when I was there, they had only been open 5 days. It takes longer than that to get everyone trained in the processes and procedures.

In the meantime, it’s a fun place to visit to say hello to the cats available for adoption. Who knows, maybe you’ll fall in love! I’m sure it will also be popular with Disney visitors who miss their cats back home, since it is the closest cat cafe to Walt Disney World. 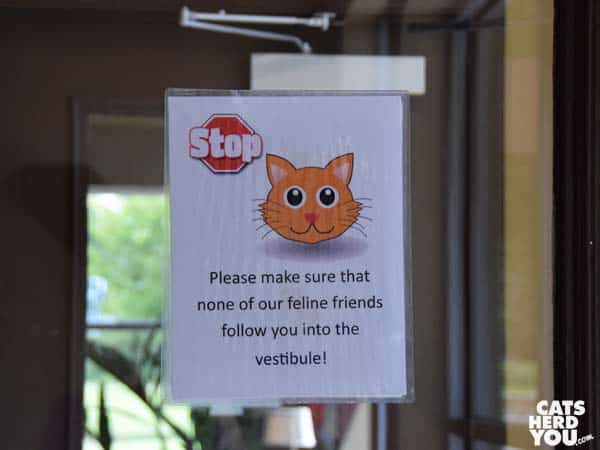 Just be careful when you leave. They already have one escape artist cat, and you don’t want to be the one who lets her out!

Update: The Orlando Cat Cafe announced their first adoptions today, including one of the cats pictured in this article.

Getting to the Orlando Cat Cafe

Although the Orlando Cat Cafe says they are “about 4 miles west of Disney’s Animal Kingdom,” that distance is only useful if you are a bird. The rest of us have to use streets! 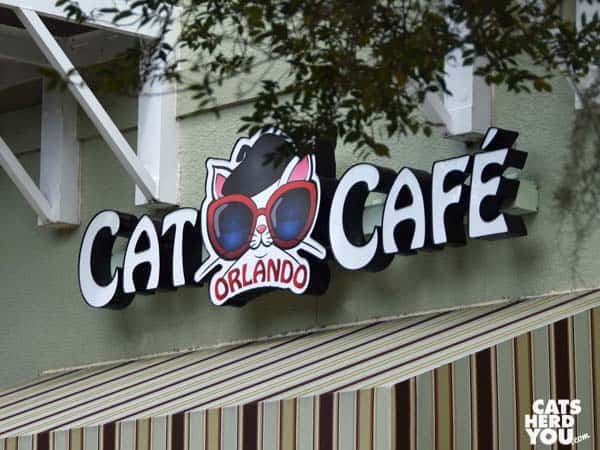 How Far is It?

The closest Disney resort to the Orlando Cat Cafe is Animal Kingdom Lodge, and the drive is 7.9 miles, so walking isn’t a realistic option to see the cats.

If you are staying somewhere else on Disney’s vast property, the distance could be much farther. The Contemporary Resort, close to Magic Kingdom, is a 14.5 mile drive.

Resorts around SeaWorld are about 16 miles and Universal-area resorts are around 19 miles away, so set aside travel time accordingly. 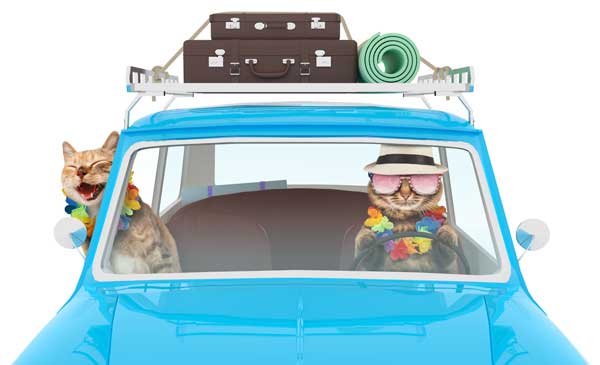 A less-expensive option is Uber, which estimates  $15-19 each way to get from Disney’s Contemporary Resort to the Orlando Cat Cafe. If you haven’t tried Uber before, you can sign up through this invitation link to get $10 free credit for your first ride with them (disclosure: I also get credit if you do).

The least expensive option is using the local Lynx bus system, at $2 each direction. Plan for up to two hours travel time due to transfers. You can use the Plan a Trip function on the Lynx site to see the bus schedules available for your visit.