You are here: Home / Archives for rescue

Each spring during “kitten season,” thousands of newborn kittens join the millions of cats already in shelters across the country. That means your local shelter has tons of cute, cuddly newborns, in addition to all the mellow, older cats and everything in between. And the shelter staff are ready to help you adopt your very first cat — or to bring home a friend for another beloved cat!

American Humane Association also suggests that when adopting a cat, consider taking home two. Many of you may remember the seniors Louie and Talia from the early days of this blog. They came to our family as siblings who were found on the rooftop of my office building, and they were inseparable their whole lives. We never realized until they were gone and the rest of us weren’t as tightly bonded to each other the difference that acquiring cats in pairs made, and it’s something that we recommend doing if you can. There’s nothing like the lifelong love that a bonded pair of cats have for each other, but it doesn’t take away at all from their being wonderful companions to the humans in their lives.

Two of our loc 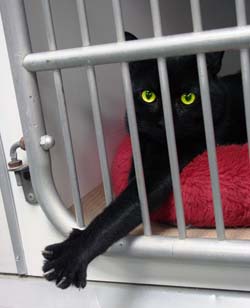 al shelters, Orange County Animal Services and Pet Alliance of Greater Orlando teamed up for big event this past Saturday to kick off the month where the lowered adoption fees to $15 per pet, and the head peep went to check it out. It was so crowded that she couldn’t get any photos of animals without crowds of people photobombing them, but that kind of crowded is a good thing. The more people there, the more homes for lots and lots of cats (and dogs) in need of homes. Orange County Animal Services alone reported 140 adoptions on Saturday, setting a one-day record. Twelve paws up for that!

One thing the head peep noticed at the Pet Alliance of Greater Orlando is that at least half of the cats had cage cards listing their reason for being surrendered as the owners moving. So it’s really important to take this month to adopt cats, but also to make sure it’s into forever homes. Adopting a cat isn’t a short-term commitment. Indoor cats can live to be 15 or more, and they can suffer from age-related ailments just like older humans do. It’s OK if you aren’t ready for that kind of commitment just yet. If you aren’t, maybe fostering for a local shelter is a better fit for you.

No matter whether you can adopt, foster, or just get out the word about this important month, get out there and make adopt-a-cat month count. Help make room for all of the cats who need room in shelters this time of year so they can have a turn to find their own forever homes.

Yesterday, the head peep drove a transport for the Cute Transport Network. 21 kitties from the streets and shelters of south Florida are making their way north to rescue programs who will find them wonderful forever homes.

How do you get 21 kitties into a catmobile? 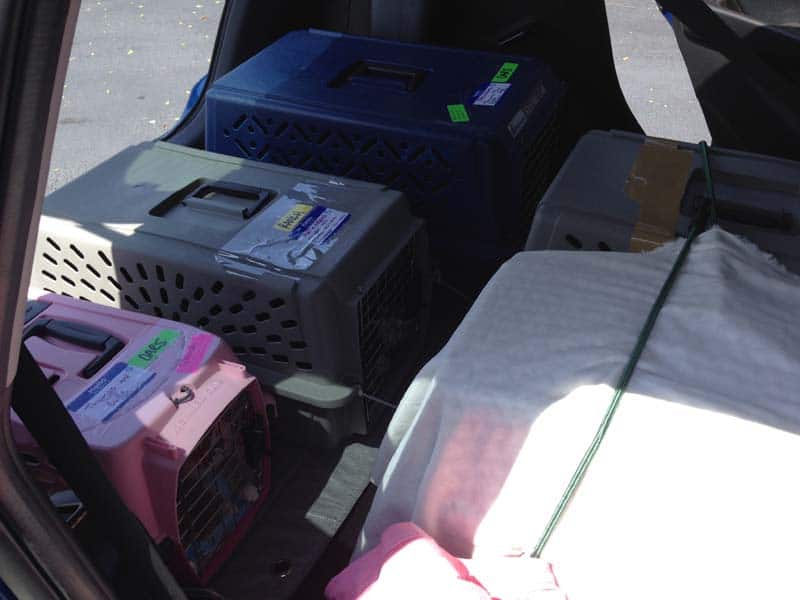 With the back seat down so that they can ride in the rear hatchback! One carrier rode in the passenger seat, and we could easily have fit one more in back. 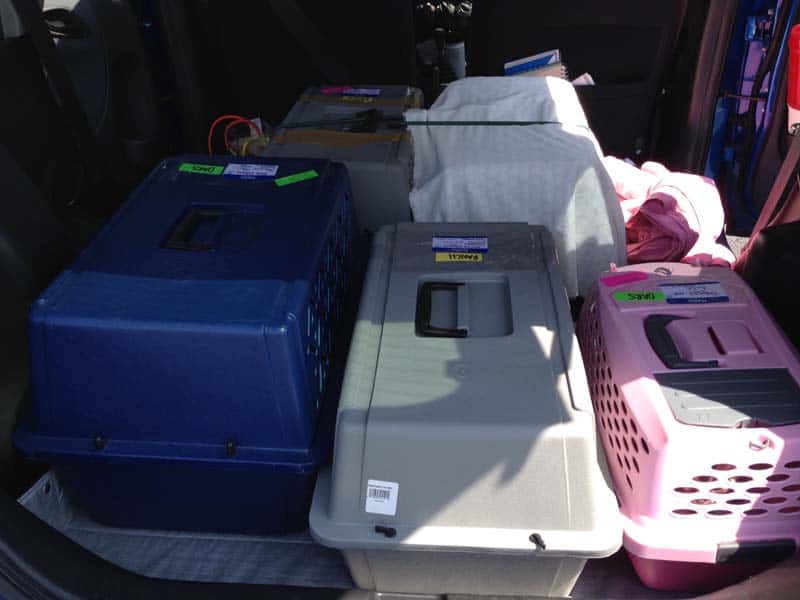 Here are some of the faces of the lucky kitties who are headed north to find new forever homes. Thomas and Belle were just spayed and neutered the day before, but they were ready to party.

Look at that Siamese face! This kitten and siblings were rescued from a Craigslist ad in Miami. 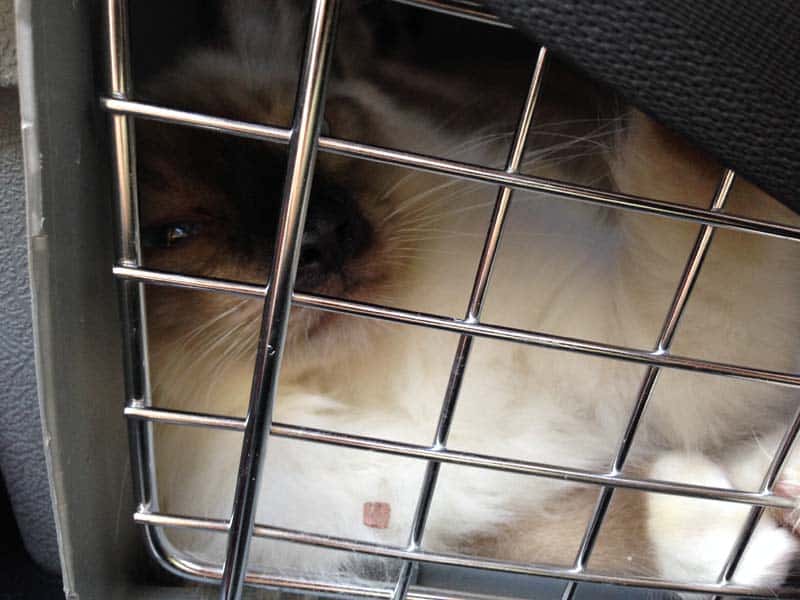 This photo was taken from the front seat, so it’s blurry, but we wanted to include it because one of these black kitties was so bold, he hissed at the head peep when she picked up the carrier. You tell her, buddy! 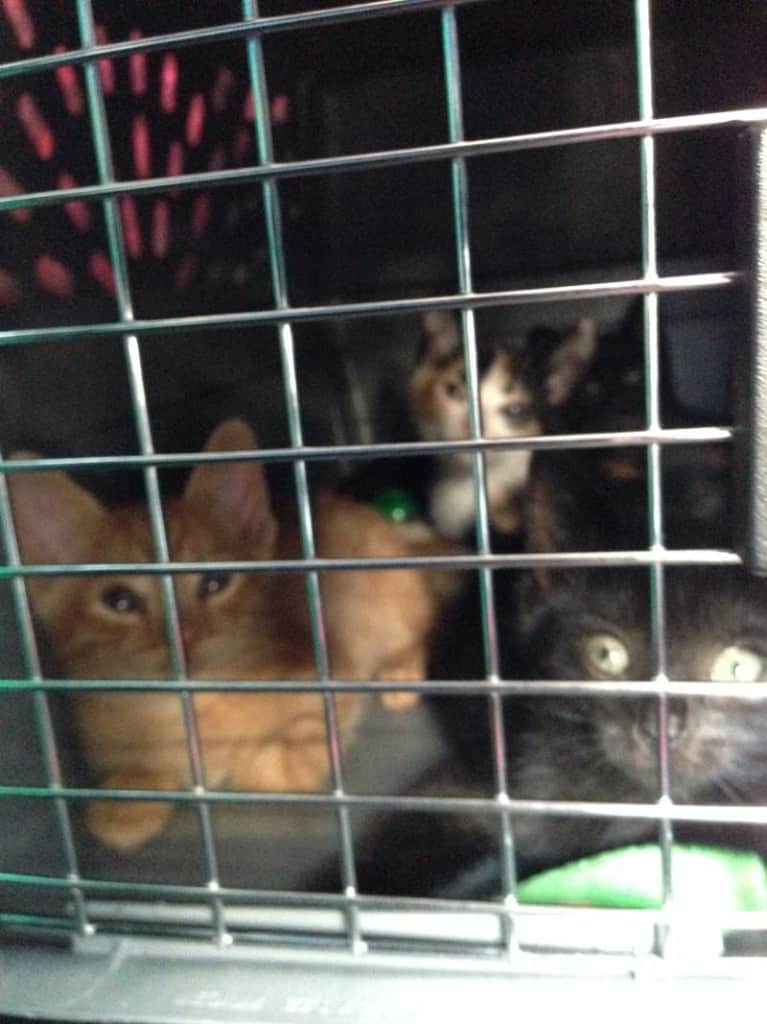 This carrier was full of quiet, well-behaved kitties who started out life on a Florida horse ranch and are going to find posh new homes up north. 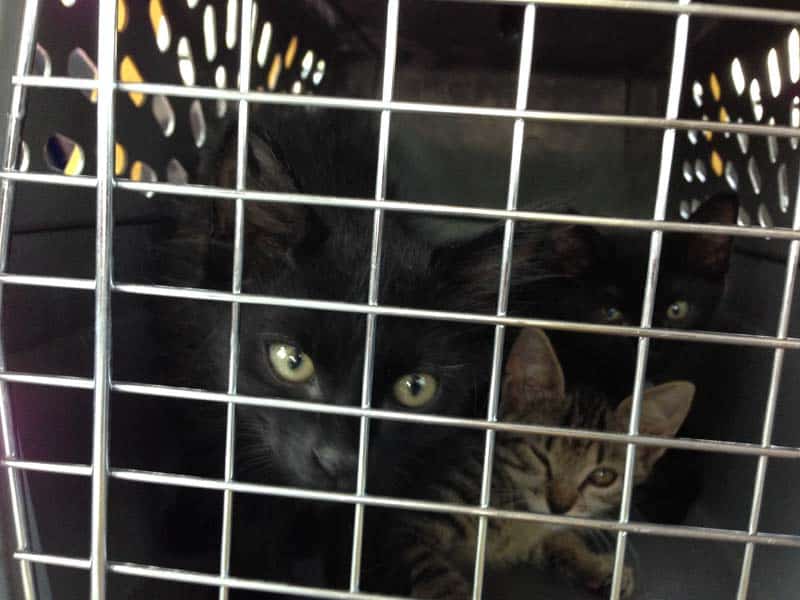 These three little faces were intent because the head peep was part of the mid-transport snack stop. They could smell that food the moment the bag was opened! 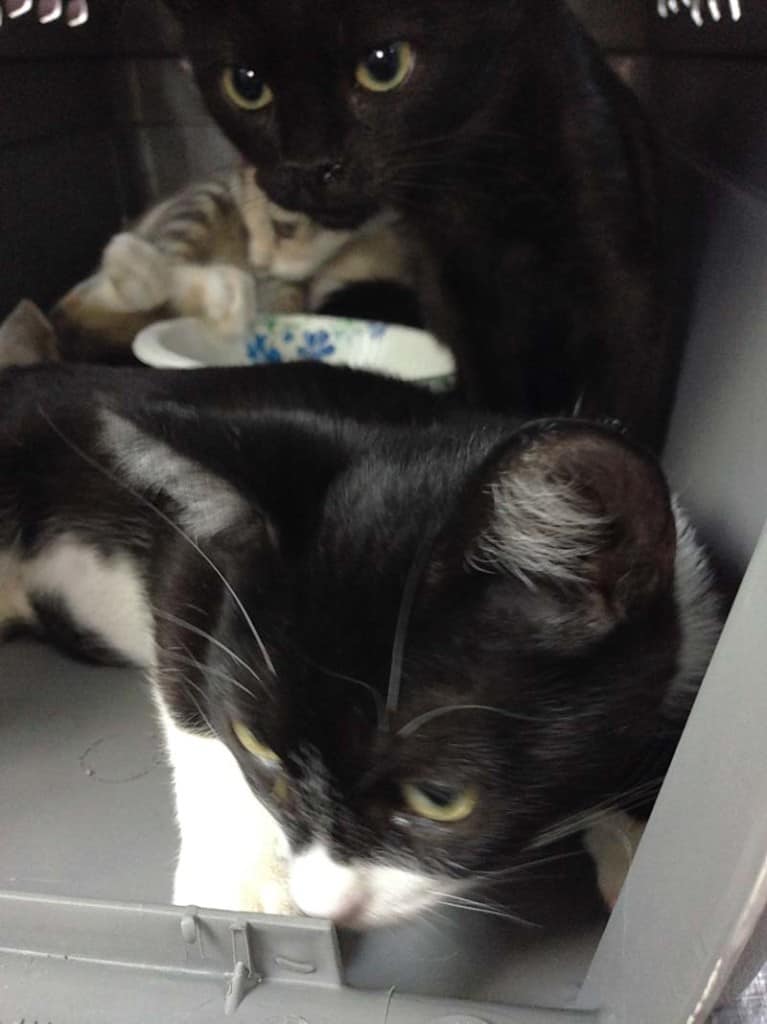 This was the first time that the head peep drove kitties who were too young to “hold it” all day. These guys made a bit of a mess. These little faces are saying, “Who, us?” Yeah, you kittens! 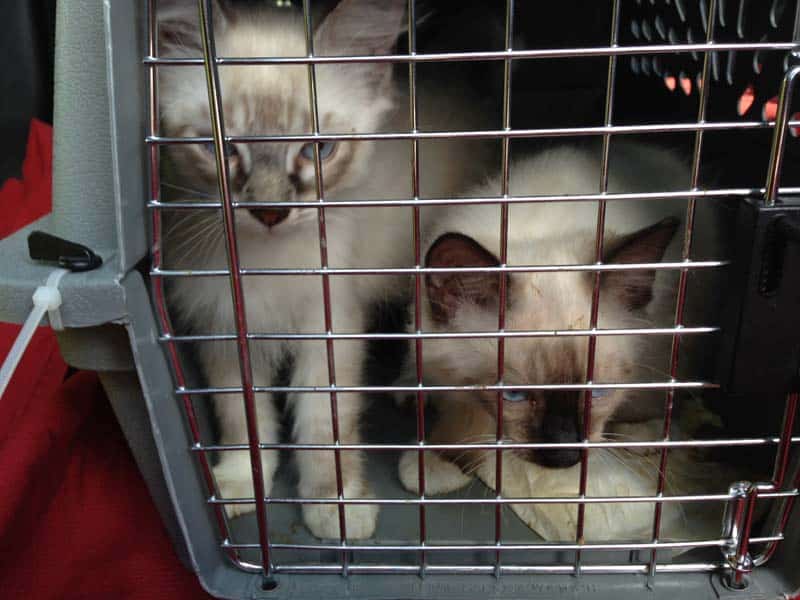 The head peep says she feels lucky to have spent a few hours with these kitties on their way to to their futures.

She also said that she felt lucky to get home to us so she didn’t have to deal with any more kitten energy. Remember you said that when we get the 3 AM zoomies, OK?

We are sure you are as excited as we are about it being Monday, so we’re going to ignore that whole Monday thing and talk about the transport that the head peep drove on Saturday for the Cute Transport Network and Your Daily Cute. She drove a two-hour stretch with this crew: 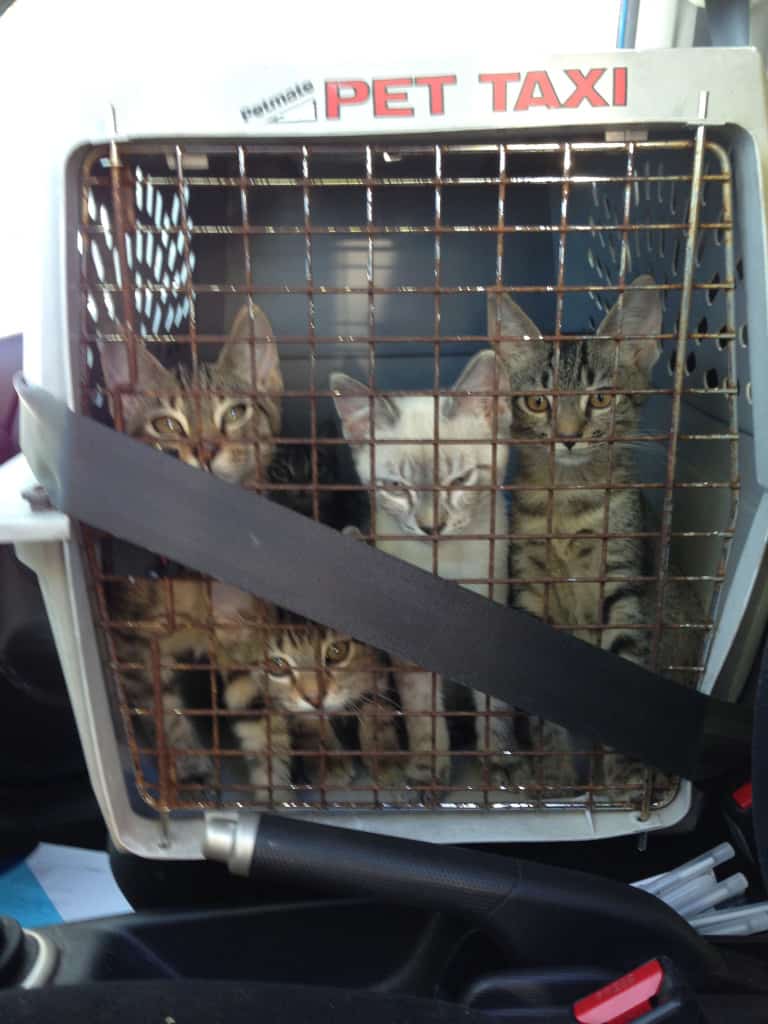 And they mostly looked like this during the drive. 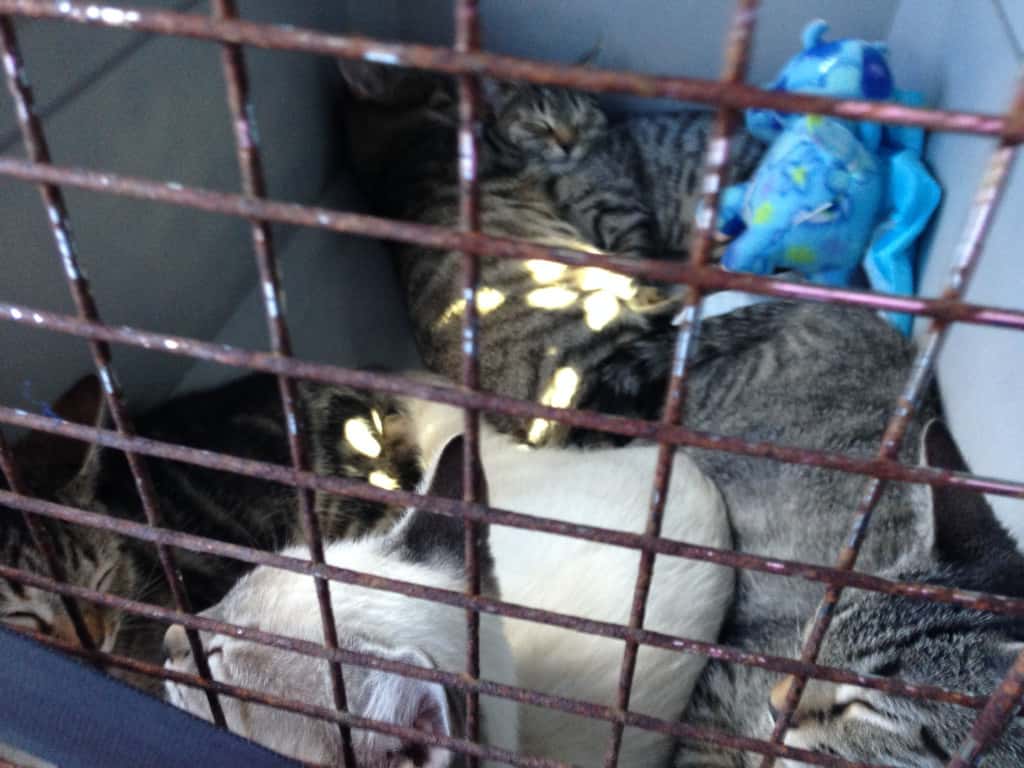 Piles of snoozing kittens. One of them was even snoring! 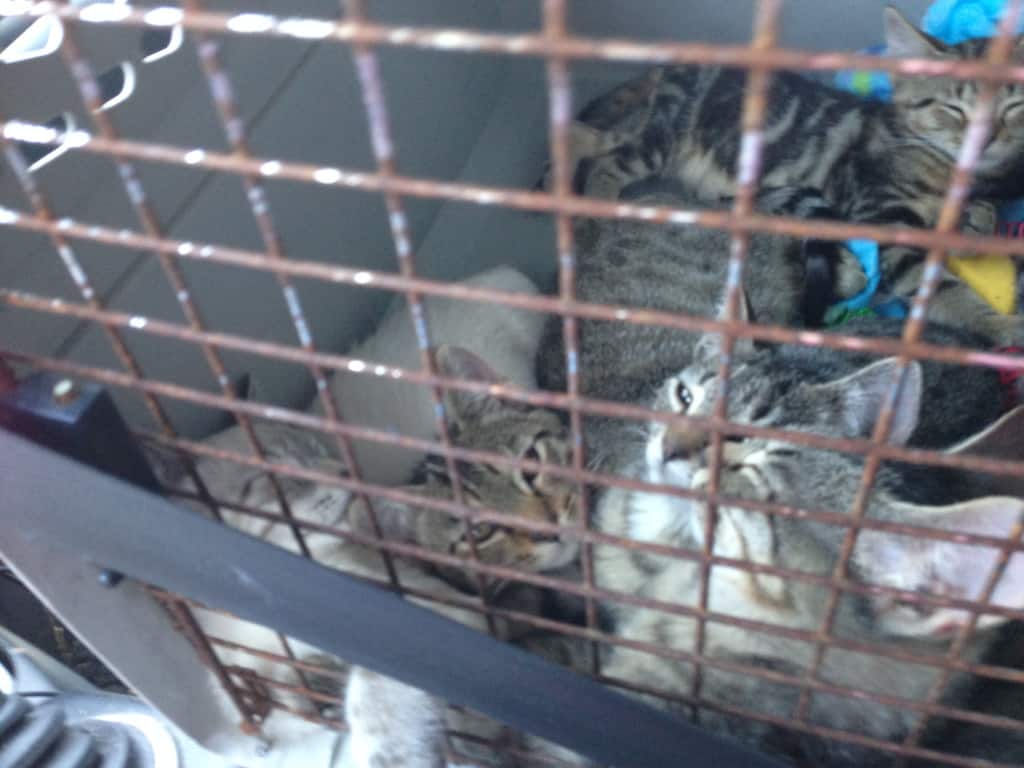 The runt of the litter was shy and stayed at the back of the carrier the rest of the time. That meant he had to smell everyone else’s feet. 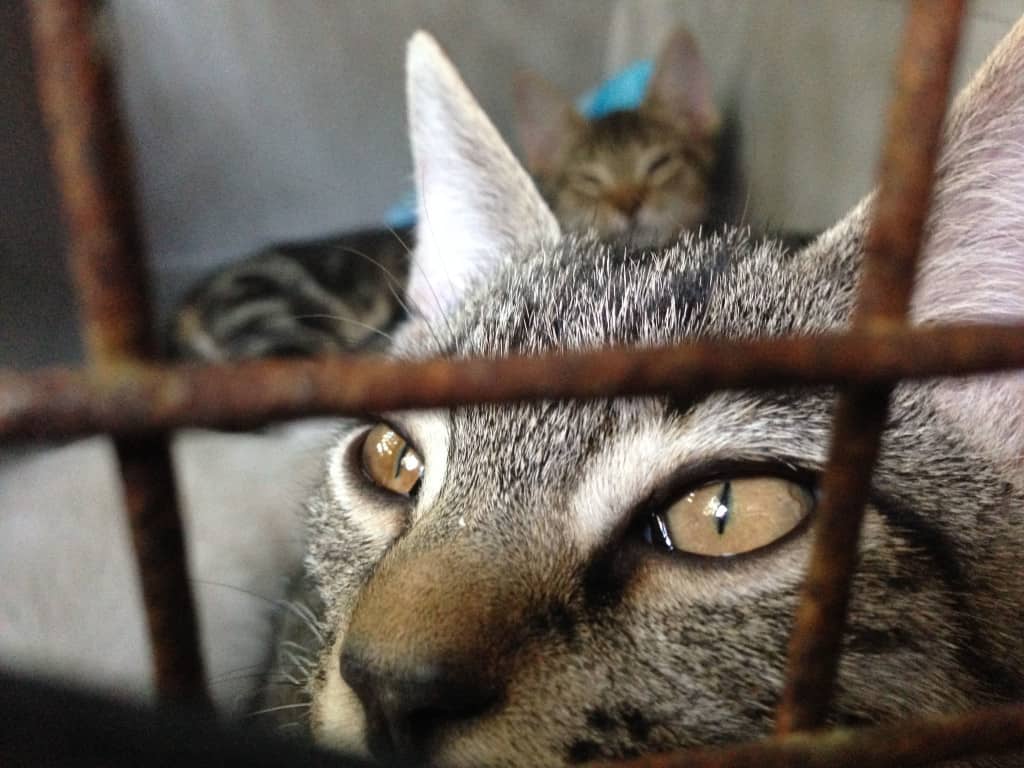 This little guy had a huge purr. It echoed inside the carrier! 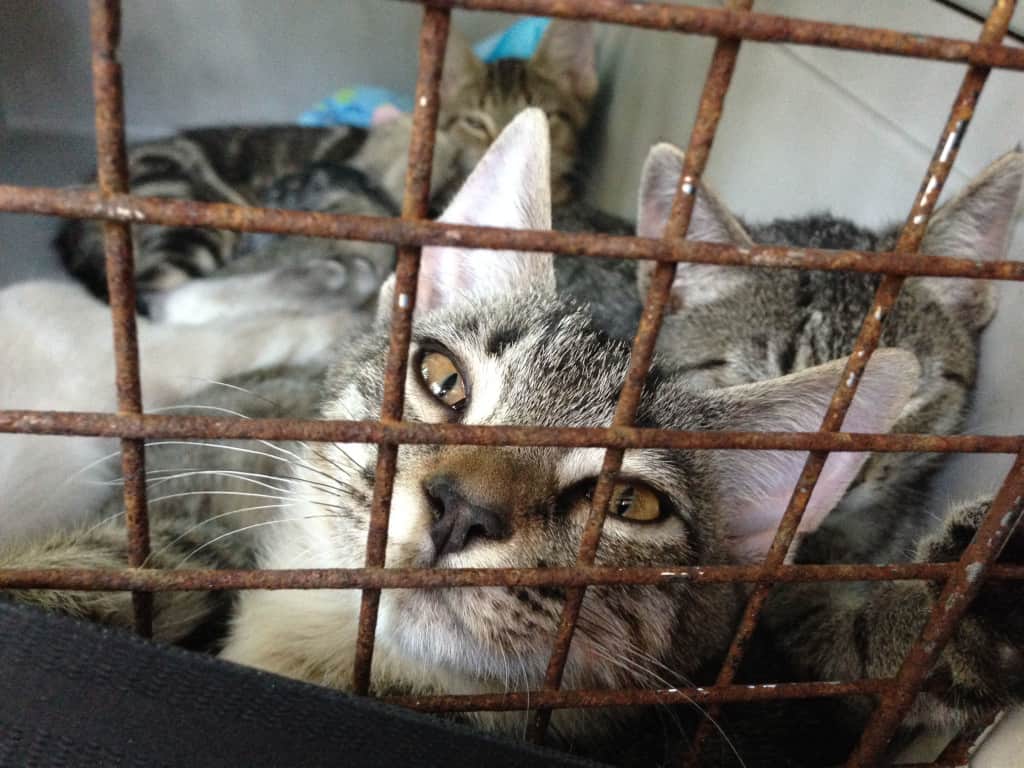 They were great passengers. The head peep just wishes we were this quiet during car rides! 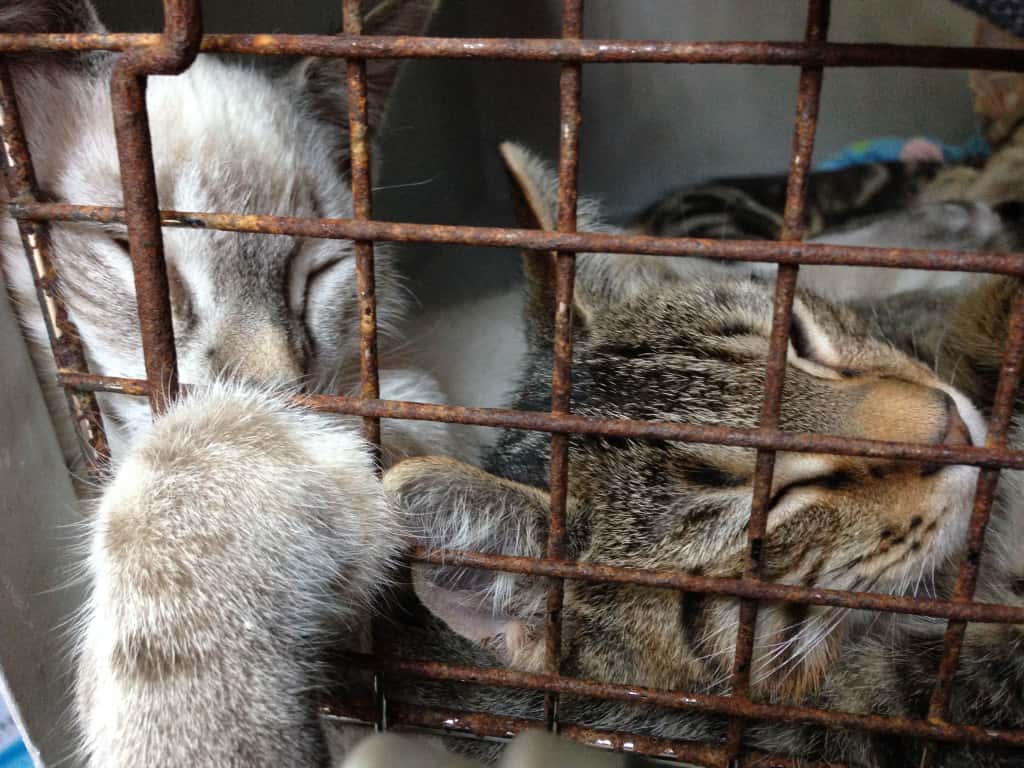 If you are interested in driving a cat to their new home in the future, you can sign up with The Cute Transport Network.

Hello, everybody. It’s the head peep. I know that Newton told you this weekend that I was going to be driving a leg of a transport for the Cute Transport Network, helping get kitties a little closer to their new forever homes. I drove nine cats about 90 miles — or, as a friend of mine pointed out, approximately 810 catmiles — in the catmobile, and it was a wonderful experience!

The driver for the leg before mine arrived in a car much larger than the catmobile with the four carriers, and she lined them up for quick photo before we loaded them up. Being cats — and stressed out cats at that — they looked everywhere but at the camera for the photo. 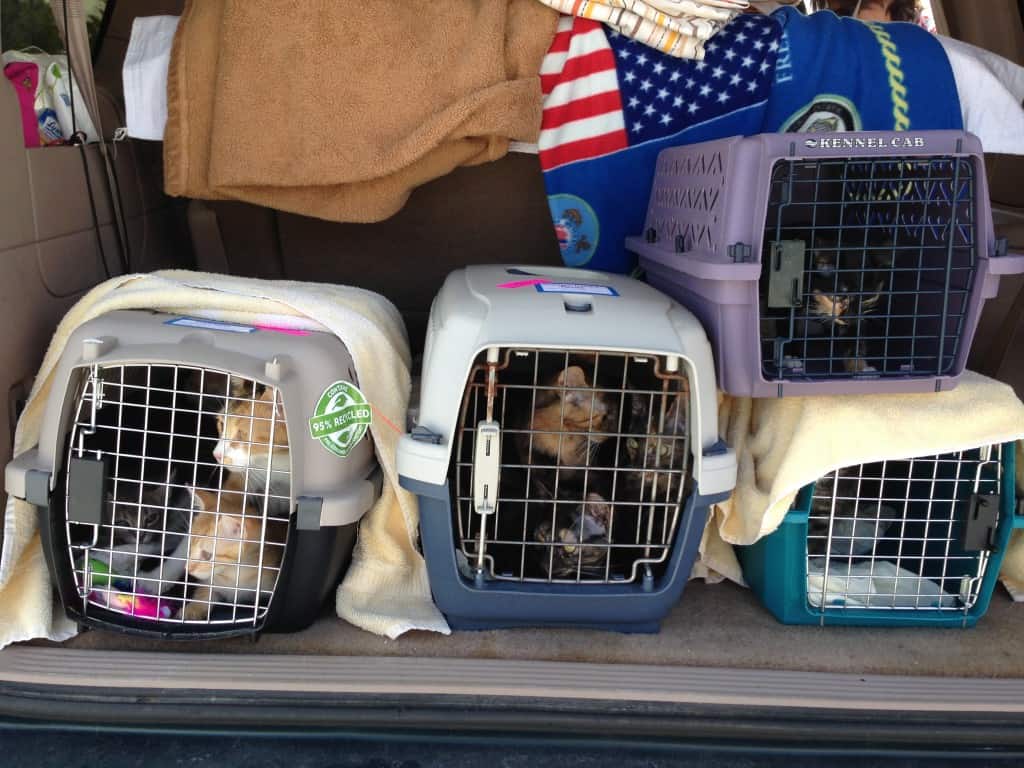 There was Margarita and Mimosa, who wants out! Two other kittens were in the back of the carrier and not pictured. 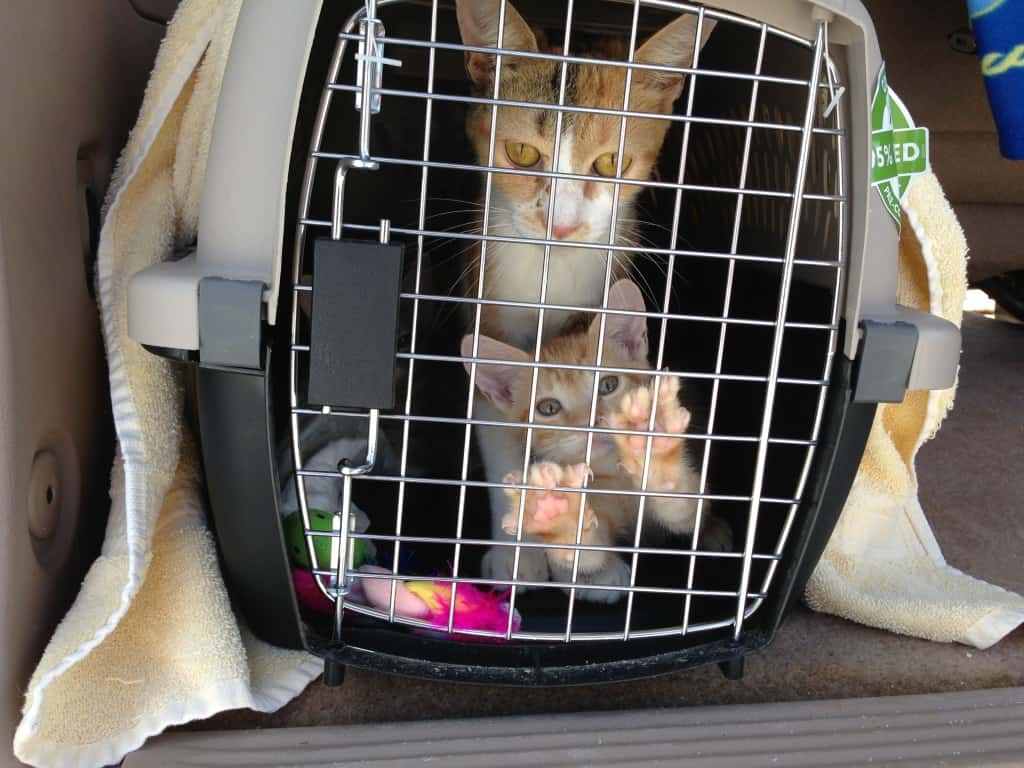 Three tortie sisters, Rue, Katniss, and Primrose, who kept trying to pull towels into the carrier door grate during the transfer. 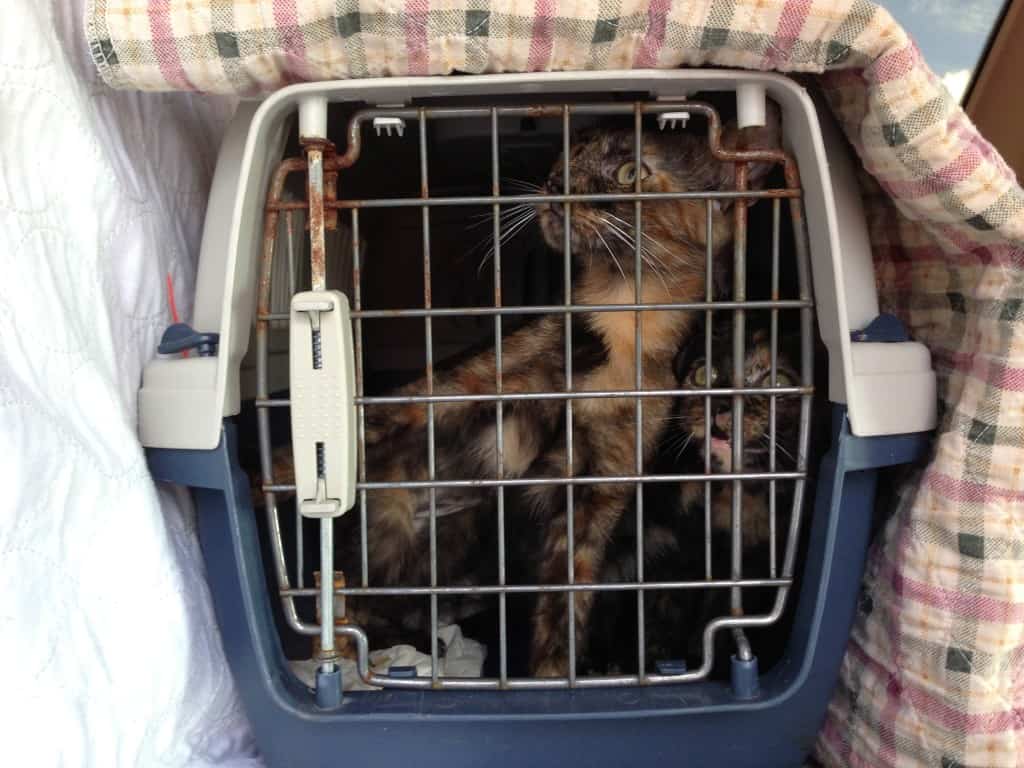 A sweet tortie named Karma who I didn’t get a good picture of at all. 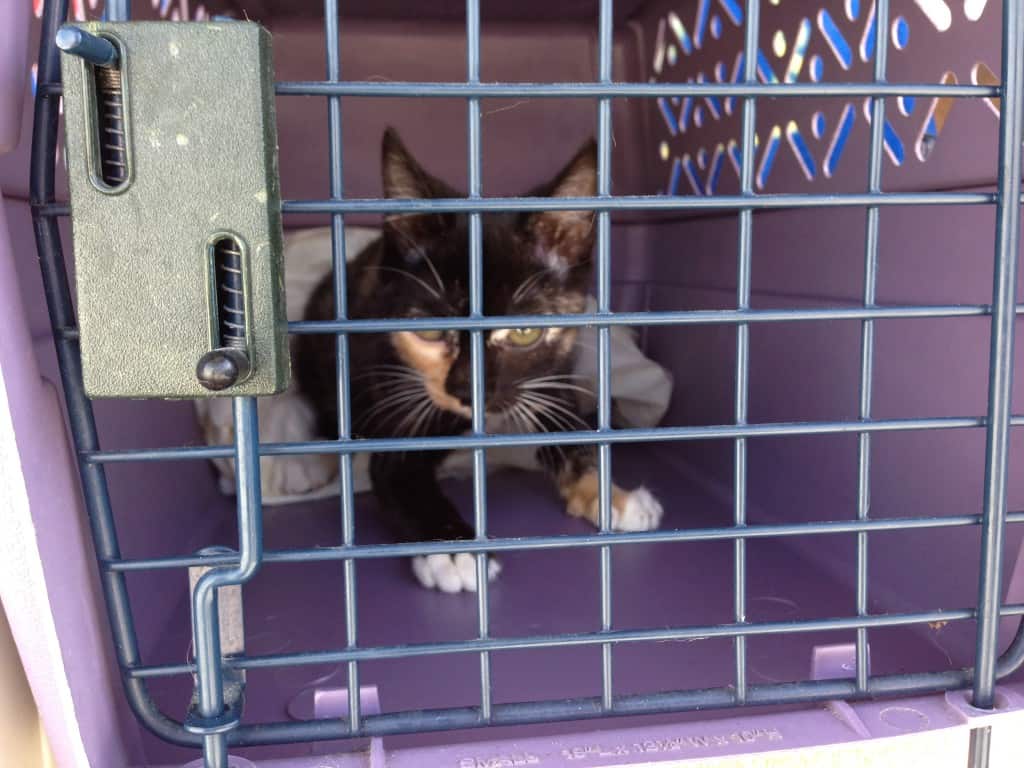 And then there was Linus, the tiniest kitten of the transport. And the most active, by far. 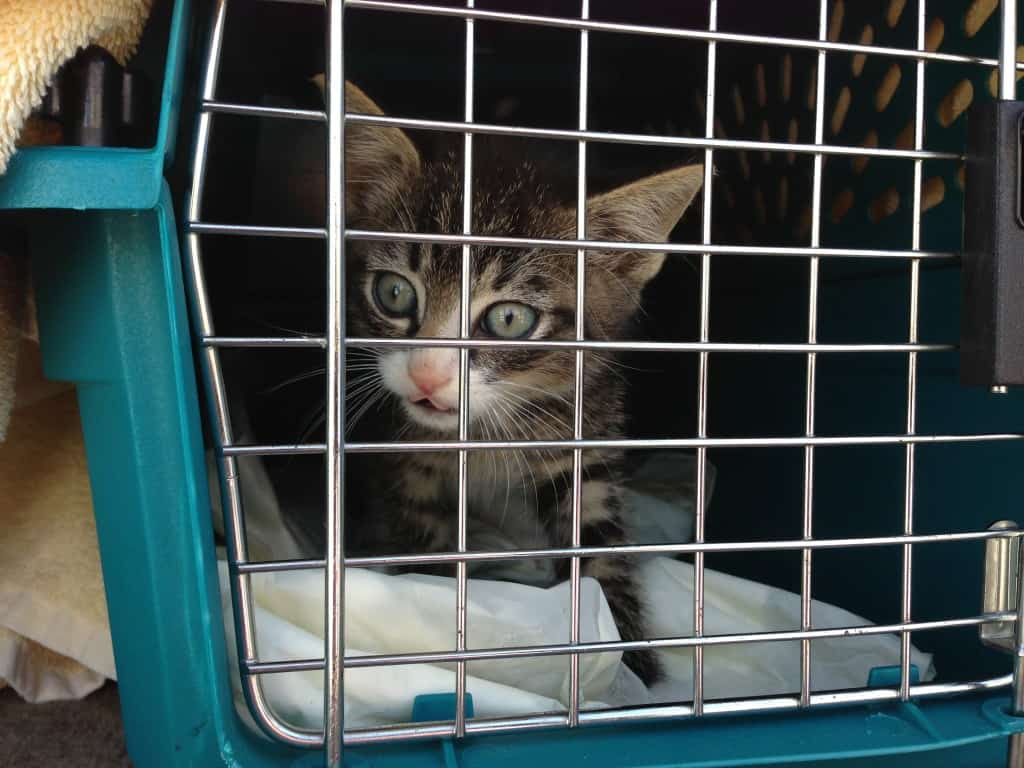 I should have taken a photo of how I used bungee cords to secure the three carriers in my back seat, since the seat was too full for me to use seat belts, and I won’t drive with unsecured carriers.

We were soon on our way, with little Karma riding in the passenger seat. That was the only minor miscalculation. It turned out that Linus isn’t just unbearably cute, but he wanted attention. Now! And he was going to let me know about it. The louder he got, the more restless the other cats were, so I spent a good part of my drive with my arm stretched into the back seat so he could gnaw on my fingertips. Who can complain about an adorable kitten playing with their fingers? Not me. 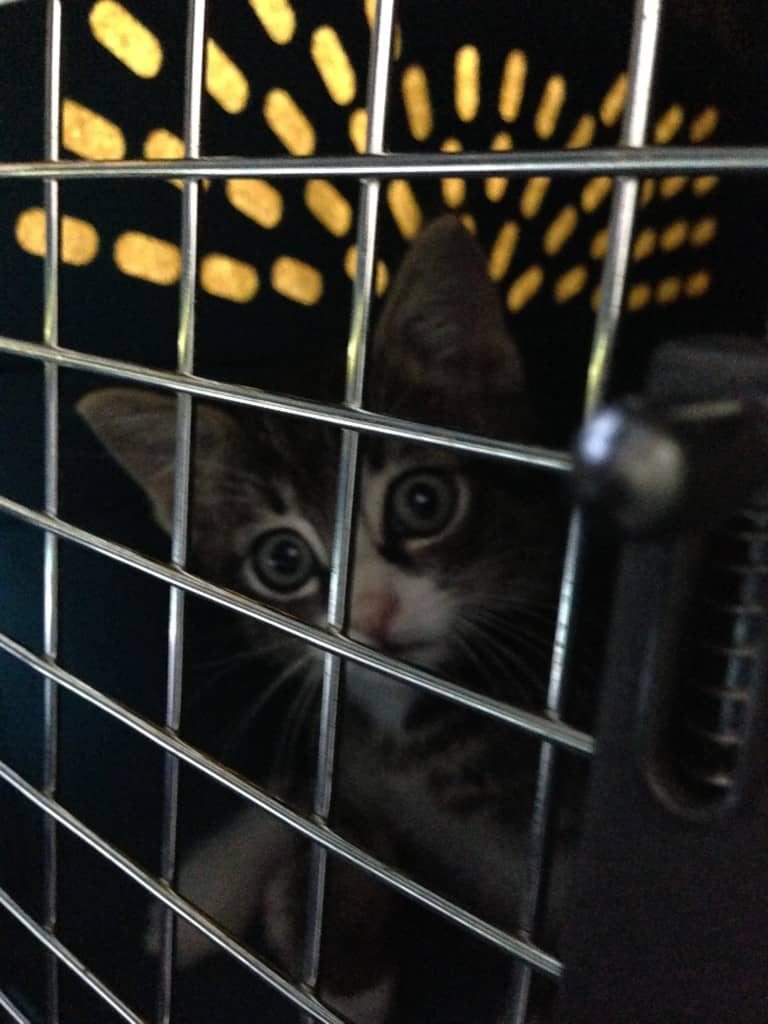 The drive — and playing with Linus — was over quickly. All in all it was a wonderful experience, and a really rewarding way to spend a few hours of the day. These adorable cats who were once in animal control shelters got one step closer to their forever homes, and that was a really good feeling. I f you have a chance to drive a transport leg, I highly recommend it.