You are here: Home / Health / Less Stress Getting to the Vet

Timid cats like Ashton can suffer from a lot of stress and anxiety when they go to the vet. Ashton regularly pants during the car ride and even at the vet’s office, a sure sign of fear. For Ashton’s recent recheck appointment, the vet suggested we try giving her a drug to make the visit less stressful. 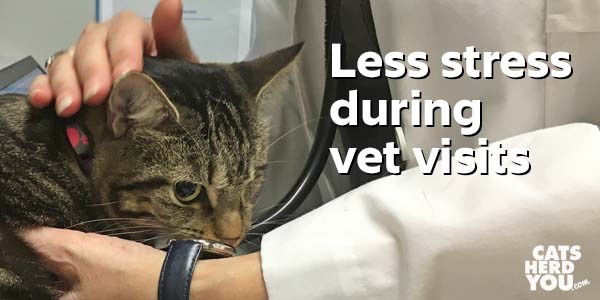 I’m not a big believer in giving drugs for everything, but Ashton gets so frightened by being taken out of her routine that I thought was worth trying. If her heart is racing and her blood pressure is way up from fear, there is no way to examine her to tell whether she is truly healthy. If it worked, having her calm and being able to get a better assessment of her health sounded worth a try.

Her veterinarian prescribed Gabapentin, which is sometimes used for pain relief in cats, to be given in a teaspoon of food two hours before her appointment. A friend whose cat took Gabapentin for chronic pain warned me that the medication was bitter, so instead of her usual food, it went into a teaspoon of pungent cat food with a thick sauce to help mask the flavor. 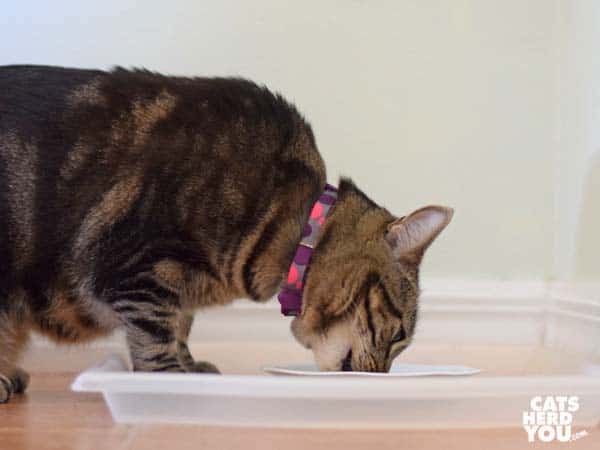 About 40 minutes after Ashton ate the food with the gabapentin, I looked up and discovered that she was nowhere to be found. When it was time to go to the vet, I found her in one of her usual hiding places in the closet. I picked her up, anticipating her usual struggle against being held, but she didn’t resist being held at all. That was unexpected!

It’s much easier to put a cat who isn’t resisting being held into her carrier, and I zipped the lid right onto her Sleepypod. She immediately let out one of her usual “For real?” meows, and I realized that although the gabapentin made her more sedate, she was still alert and able to talk all the way to the vet. 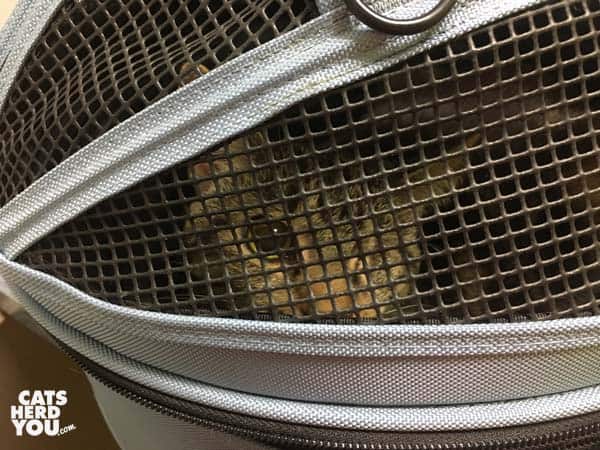 I always start early when I’m gathering Ashton up for a vet trip, not knowing if it is going to take a while to locate a hiding place or get her out from under some piece of furniture. That meant we were so early for her first-in-the-morning vet appointment that they weren’t even open yet.

I climbed into the back seat of the car, and with the doors and windows closed, I unzipped the Sleepypod. I expected to find her cowering in the bottom of the carrier, panting and drooling. Instead, Ashton sat up, looking alert but not afraid. This was a real difference from her usual attitude when she was in the car. 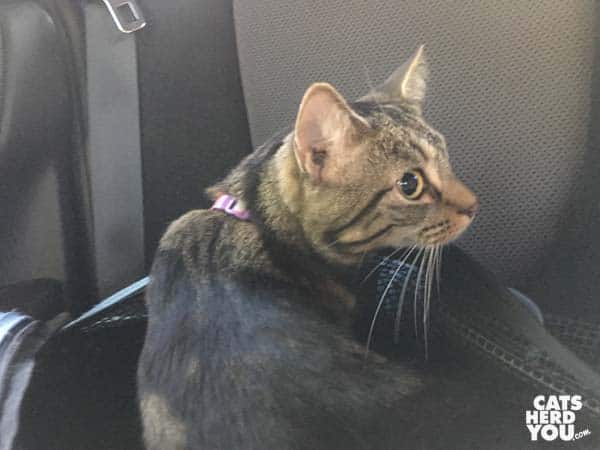 When the office opened, we went inside for her appointment. In the exam room, the vet was able to reach into the pod and pull Ashton out with no resistance. She placed Ashton on the scale in the exam room, and Ashton made no attempt to crawl off of the scale like she usually would. Instead, Ashton curiously looked up into her face while she listened with the stethoscope. 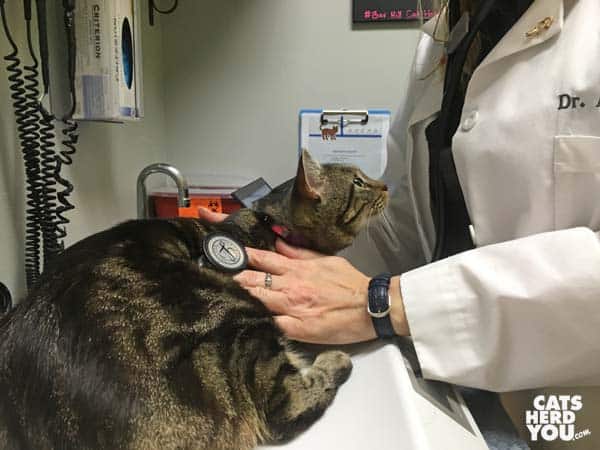 Every once in a while, Ashton would register a verbal protest, but she seemed calm otherwise. At the end of the exam, her vet picked Ashton up and said, “This is one of my favorite parts of gapapentin. I get a cuddle.” And she did! Ashton doesn’t even let me cuddle her like that. 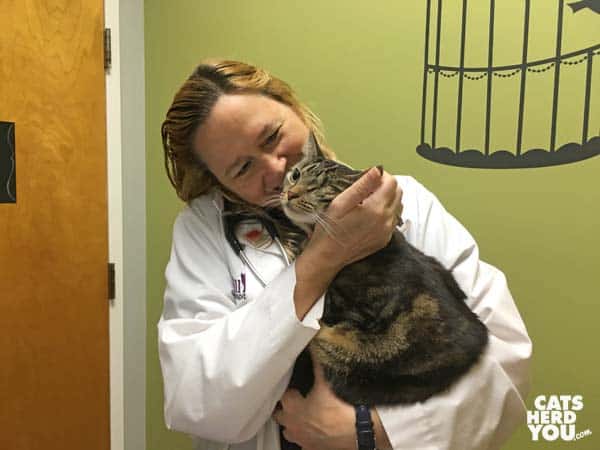 Overall, there were signs of stress during the experience, but they were diminished from the usual vet trip. Ashton stress-shed some fur, but not as much as usual. She also never reached the point of panting out of fear in the car like she usually does. When we got home, she didn’t hide for hours, which seems like a sign that it was a less scary experience for her. She was back to completely normal within a few hours, sooner than Pierre stopped telling her she smelled like the vet.

I’d call gabapentin a success for reducing Ashton’s stress level for a vet visit. There’s no way to know what was going on inside her head, of course, but outwardly, she didn’t exhibit signs of stress the same way, and we will be using it for her again when it is necessary for her to visit the vet again to make the experience less traumatic for her.