You are here: Home / Life With Cats / First Visit to the All-Cat Veterinarian

I wasn’t comfortable with the treatment plan that our regular veterinarian came up with for Pierre, and that meant he had to go out for yet another exam, this time at the all-feline veterinarian.

Pierre: I wasn’t supposed to have to go back for months. What’s going on? Not funny! Can we go home now? 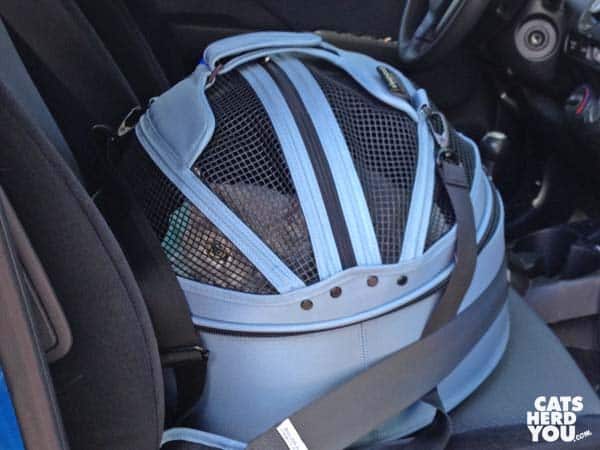 Never having been to an all-cat vet clinic before I wasn’t sure what to expect. The first thing we saw was a welcome sign for Pierre and the other cats who had appointments that day. 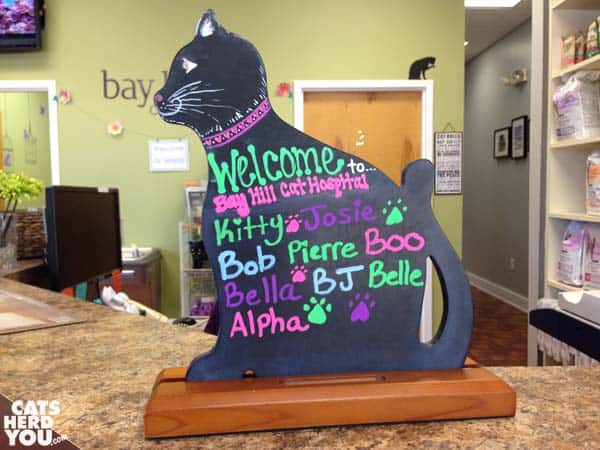 We were greeted by the clinic cat, Josie. Isn’t he beautiful? 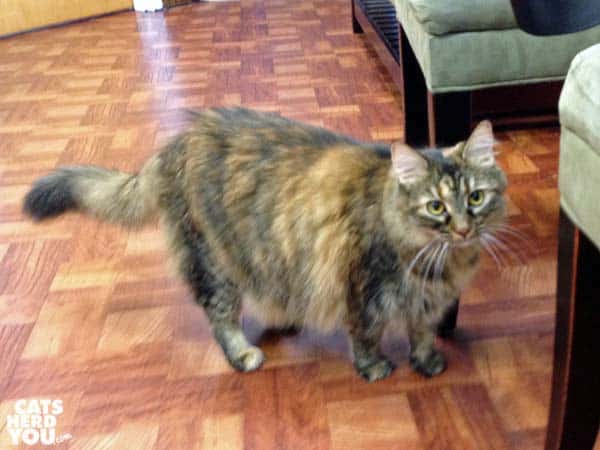 She was very friendly, but what she really wanted was to get up in the window so she could watch the people and scenery outside. She has her own cat-sized sofa (behind her in the photo) to make sightseeing comfortable. 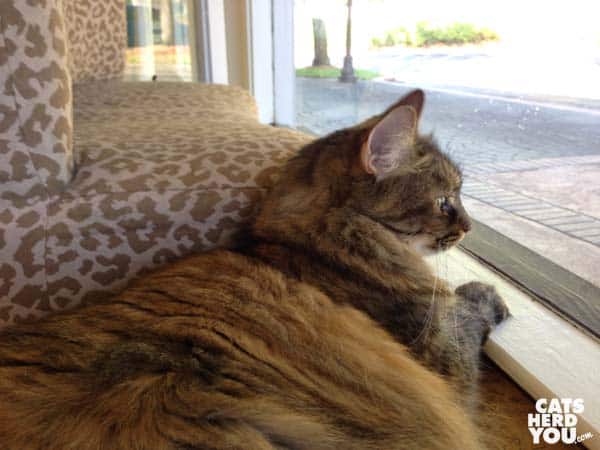 There were also a pair of cats for adoption in the lobby. Donut here has just as good a view as Josie from her window. I hear they sometimes get squirrel visitors on their cat TV, too. 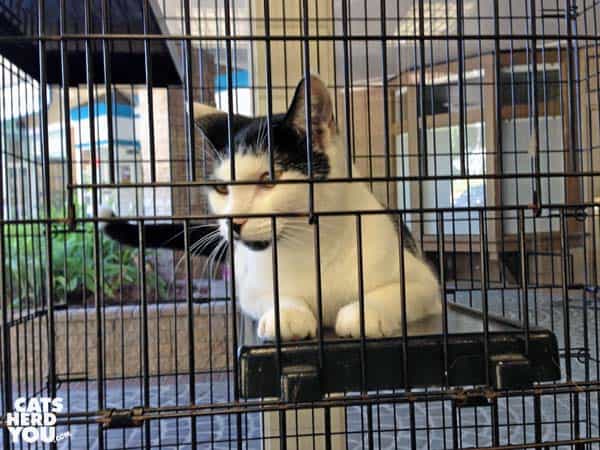 I was surprised at how tiny the exam room was. I took this photo by backing up into the corner until my back was pressed against the walls. 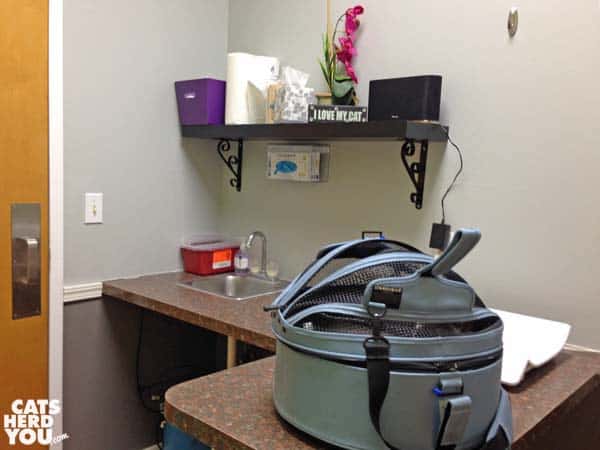 I thought about it and realized that I was used to vet clinics that were laid out just like the one I had grown up visiting with my pets as a child, all sized to accommodate big dogs. That’s not a consideration in the all-cat vet.

Instead of being sized for big dogs, the cozy exam room was a calming place for cats. There was tranquil music playing that reminded me a little of what you hear during a massage session. There was something else to help cats relax, too. Do you recognize it?

It’s a Feliway diffuser, to help cats feel calmer and more comfortable in the exam room.

And for the humans, the decor in the exam room itself was pretty whimsical. 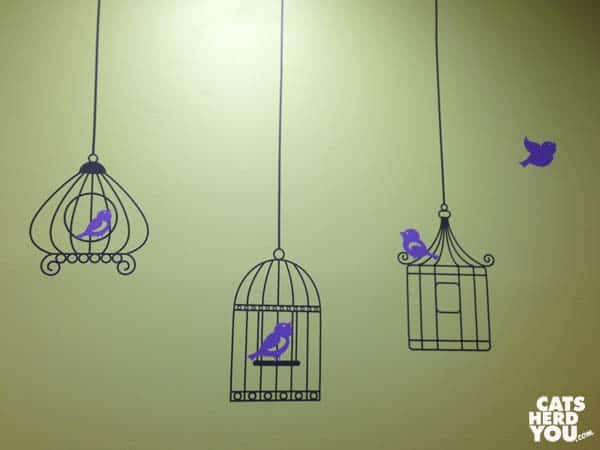 Pierre: I am so unimpressed by the fake birds on the wall. Can we go home now? 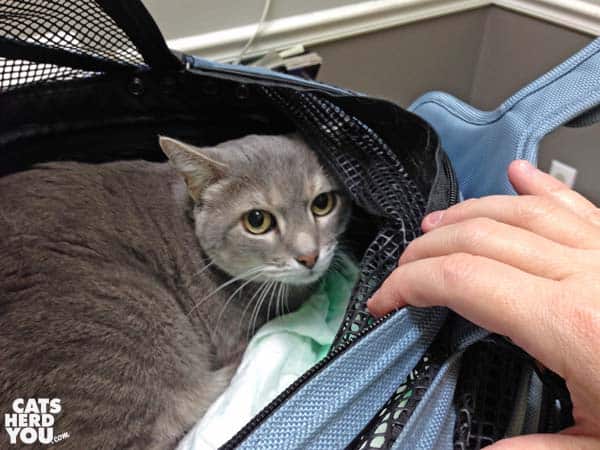 Everyone coming and going from the room opened the door gently and spoke in soft voices, from the techs to the veterinarian. That’s something that certainly didn’t happen at our regular veterinarian!

Dr. Avok gave Pierre an exam while he was on the scale since he seemed to want to stay there after his weigh-in. 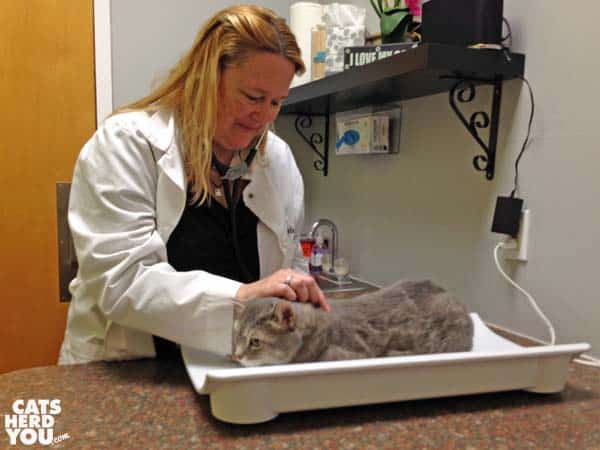 While Dr. Avok and I had a talk, Pierre was free to find the most comfortable spot in the room. 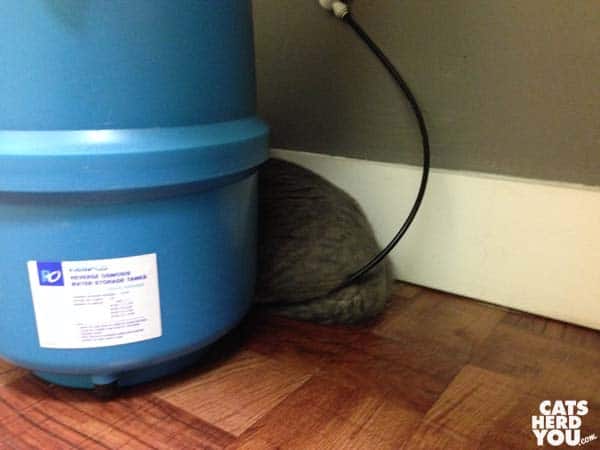 The most comfortable spot in the room was apparently behind a little water conditioner unit. I asked if I should get him out from behind there, since I knew my usual vet would have wanted him moved, and Dr. Avok said, “If he’s comfortable back there, you can leave him. He’ll probably come out when we leave the room.” Wow, a vet who thinks like a cat! I wasn’t used to that.

Pierre: No looking! When my head is hidden, you aren’t supposed to be able to find me. Can we go home now? 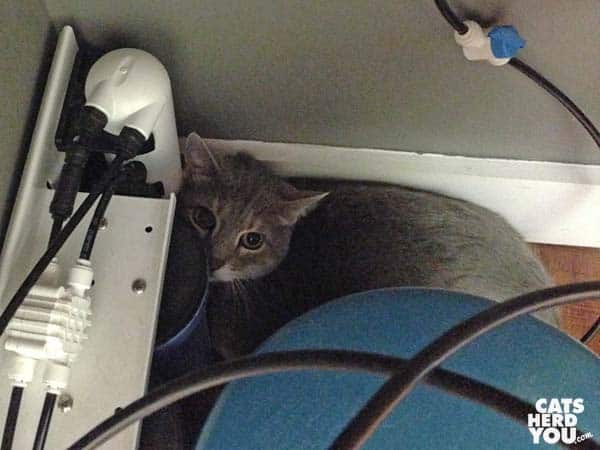 Pierre needed blood and urine drawn for some additional lab tests. When Darby, the vet tech, said they were going to take Pierre in back, I asked if they would do the draws in the exam room. She didn’t bat an eye. “Of course.” That never would have happened at my regular vet, either.

Darby and Michele drew Pierre’s blood and performed a cystocentesis to get urine right there while using surprisingly little restraint. They even offered to clip his nails while they were at it! 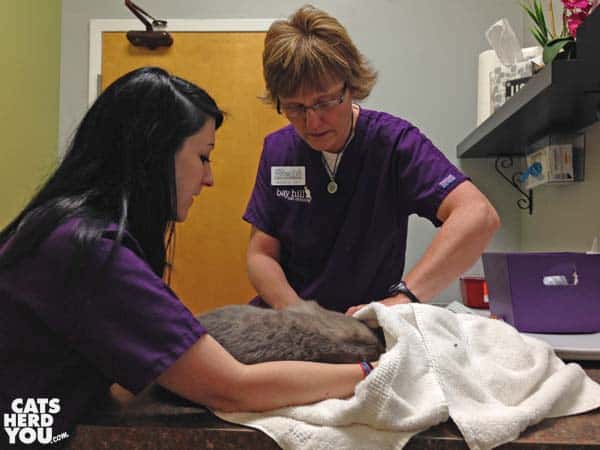 Pierre: I’ve had enough poking and prodding. Can we go home now? 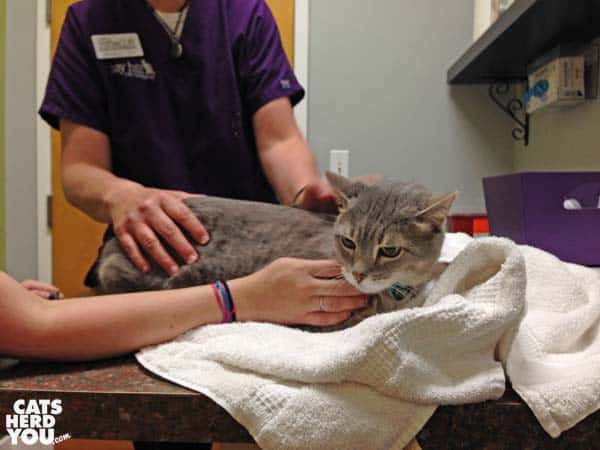 Apparently, they normally do checkout on a laptop in the exam room so that cats don’t have to go back out into the lobby and wait. What a great way to cut down on stress to cats who have already been through an exam. Unfortunately, we couldn’t do that for Pierre’s visit due to network issues. So we went back out into the lobby.

Pierre waited on one of the very posh chairs in the waiting room while I took care of the bill.

Pierre: Can we go home now? 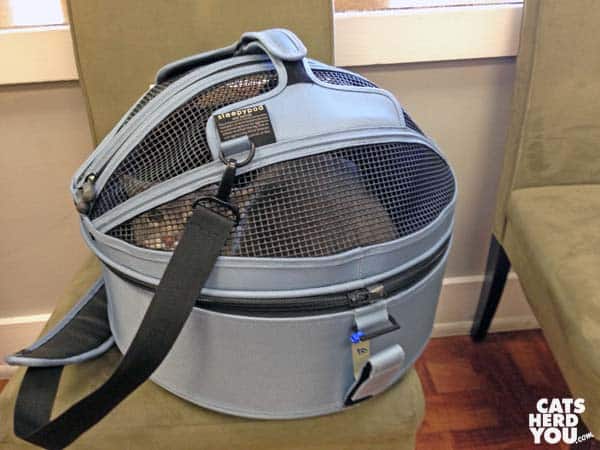 We are waiting for additional lab work to come back so that we can get a treatment plan, but I feel better having talked to a cat-oriented vet who was willing to hear the research I brought her and discuss how it fits into a long-term treatment for chronic kidney disease.

Pierre may have acted unimpressed by going to an all-cat vet where there were so many details intended to make him comfortable, but he was back to his normal self almost immediately when we got home instead of going into the closet to hide for a few hours the way he normally would after a vet visit. So it seems that the experience was better for him, too. I finally understand why people who go to all-cat practices say there’s such a difference. All the details really do add up to better vet trip for everyone.