You are here: Home / Life With Cats / Confident Cats: Nature or Nurture?

Ashton is not a confident or outgoing cat. When a new object comes into the house, she is the last cat to enter the room and examine it, after she is sure Newton and Pierre have both have seen it first and assured her it isn’t dangerous. When the doorbell rings, she vanishes. 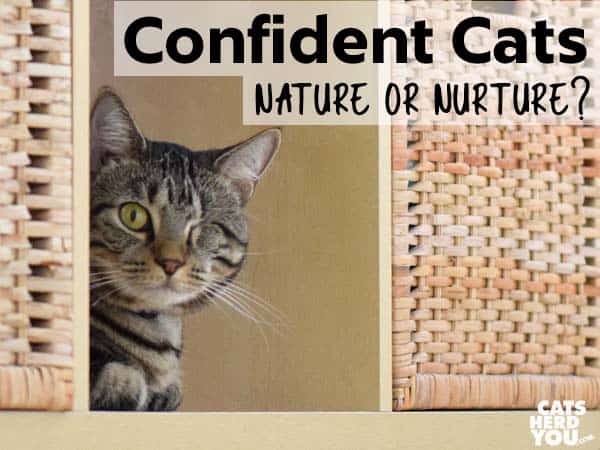 Is her lack of confidence part of her nature, or did her experiences nurture the behavior along the way? The answer could be a little bit of both.

Cats are much more receptive to socialization when they are kittens under eight weeks old. Things they learn during that developmental period become part of their “normal” world, and the more new people they meet during this time, the more likely they are to think new people are no big deal.

Introducing kittens to new objects, situations, and locations can help them grow into confident adult cats, too. The more cats learn they are safe anywhere they go, the more confident they will be later in life. 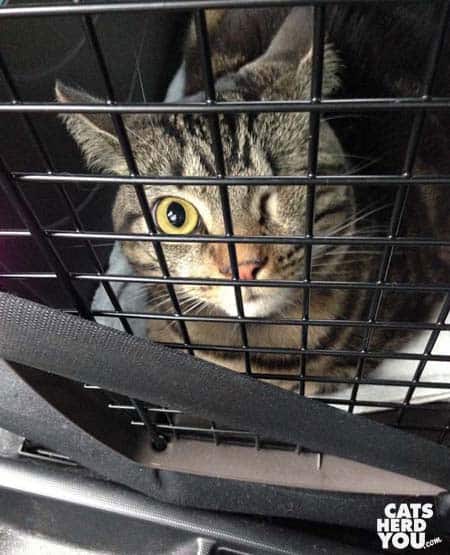 Kittens who grow into cats whose only experience with going anywhere but their own home has ever been to the vet are more likely to be frightened instead of confident.

Behavior isn’t like a cat’s eye color or coat pattern. There is no gene for being friendly or for other behaviors. This means that any effects of a cat’s genes on behavior are indirect. 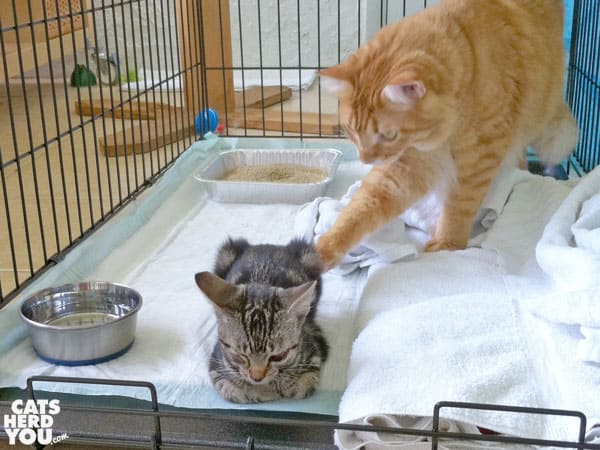 Knowing this, it’s surprising that a cat’s likelihood to be confident and friendly is partly an inherited trait. More than one study has found that kittens who are friendlier toward humans have fathers who are friendlier toward humans. This sounds like it could be something they learned during kittenhood from their parents, but the results held true even when kittens never saw their father.

Even fearful cats like Ashton can learn confidence over time. It took her five years, but she now allows my husband to pet her when she is on the cat tree. 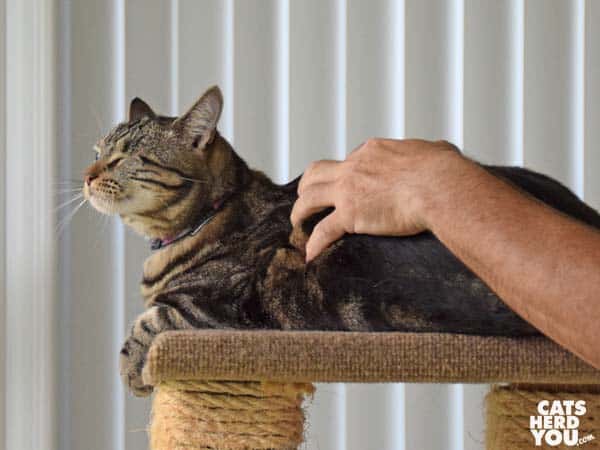 There is no accident that the more a cat plays, the more confident she gets. Good play experiences where she can catch and conquer her prey make a cat feel confident, and they also serve as great bonding time for her and whoever is playing with her.

I had no idea when Ashton was rescued as an injured kitten that she had never been handled before. She was an estimated 8 weeks old, so she was past the period where handling her would have had the best results for socializing her.

Since she was found in a downtown area, she probably had a feral father, so we will never know how friendly he was. We can guess that Ashton inherited some of his caution about humans. 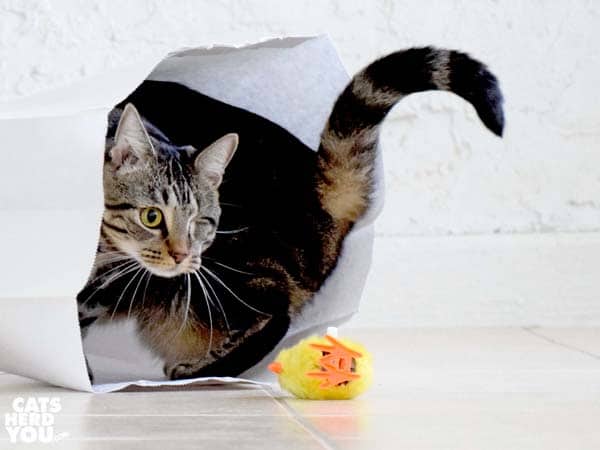 Although Ashton isn’t a fan of wand toys that fly through the air where she can’t judge their distance, Ashton’s confidence grows when she plays and also when she discovers new objects that aren’t actually scary after all. We encourage play with lots of toys she finds interesting, and slowly Ashton has become more confident. No matter what her timid nature is, she has slowly become a more confident, less fearful cat, and that’s encouraging to see!

Applied Animal Behavior Science, The impact of paternity and early socialisation on the development of cats’ behaviour to people and novel objects
Physiology & Behavior, Friendliness to humans and defensive aggression in cats: The influence of handling and paternity
Alley Cat Allies, Socializing Feral Kittens