You are here: Home / Health / Umbilical Hernias in Cats

I mentioned last week that Cupcake had hernia surgery just before joining our family, and I got a couple questions about it afterward. So today, we’re going to talk about cat hernias. 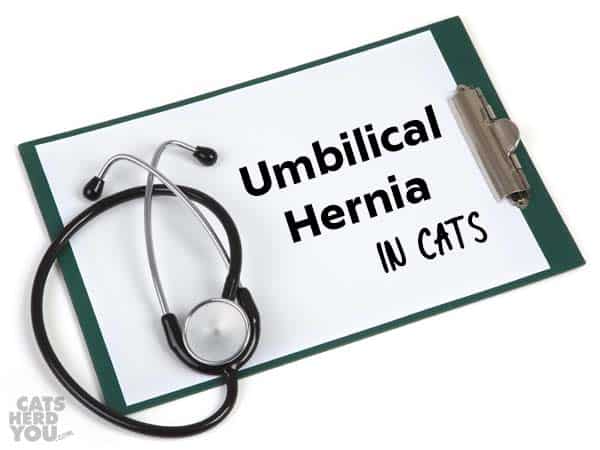 What is a Hernia?

A hernia is a condition that affects both humans and other species of animals. It means that there is a weak spot in the abdominal muscles or in the diaphragm, and that tissue or organ is bulging through the weak spot.

Hernias very from small and nearly unnoticeable to larger, depending on how big the area is of weak muscle. In rare cases, hernias can become dangerous if the contents of the hernia are constricted where they pass through the hernia and can’t get blood flow. This is called a strangulated hernia.

Hernias have different names depending on where on the body they are found. For instance, umbilical hernias are at the site of the belly button, while diaphragmatic hernias are abnormal openings in the diaphragm.

Cupcake’s hernia was small enough that it wasn’t caught until after her spay surgery. But she was nearly three months old, and she was about to take an airplane flight and be adopted. Even though her hernia was small, we decided it was safest to have her hernia taken care of, so she was scheduled for hernia surgery. The surgery for a an umbilical hernia wasn’t more strenuous on her than her spay surgery, and she was able to travel the next day.

A week later, the most noticeable thing about her surgery site is that her tummy is shaved. 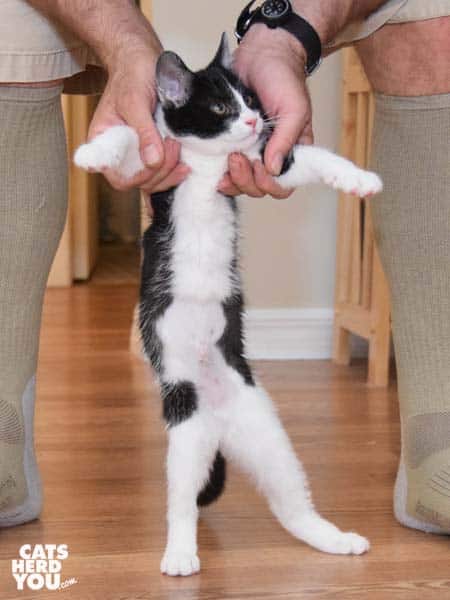 If you look closely, you can see some of the surgical glue left on her fur, and just above that, a pinker bulge where the absorbable stitches are holding together the layers of muscle so they can heal properly. Our vet examined her over the weekend and said she is healing well. We expect the bulge will probably become less noticeable and may even flatten out entirely once she finishes healing. 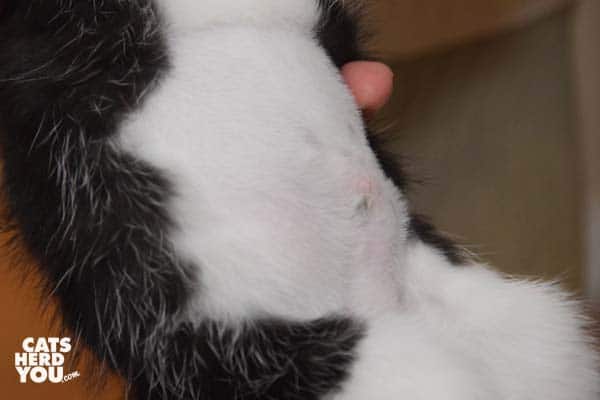 It certainly hasn’t slowed her down a bit! Kittens who go through hernia repair are just as bouncy and rambunctious as any other kittens. So if your vet tells you that your new kitten has an umbilical surgery, don’t panic. Cupcake says that getting all fixed up is a piece of cake.