You are here: Home / Cats / The Unexpected Lap

I’ve been holding a story about Cupcake for a couple weeks, trying to decide whether to tell it here or not. I decided to go ahead and tell it because I’m very proud of how well Cupcake handled the situation. Even if it made her wear a “what was THAT” expression for a while. 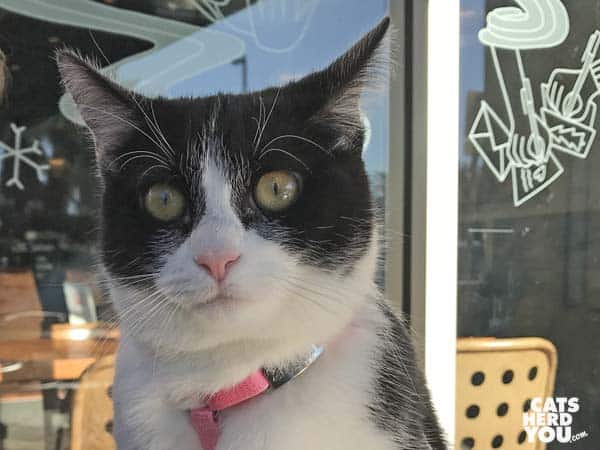 The afternoon of New Year’s Eve was just warm enough to sit outside, as long as you stayed close to the sun and out of the wind. The coffee shop nearby with the sunniest patio is in a very heavily tourist area, so the patio was busy with visitors coming and going.

This isn’t Cupcake’s favorite patio, because it’s a noisy place, between the noises from the adjacent tourist attractions and the frequent buses at the nearby stop sign. Buses have air brakes, and Cupcake does not like air brakes.But the forecast was for freezing weather ahead, so I knew we wouldn’t be visiting any patios in the near future. We should make this one count.

A family came up to the coffee shop, and their little boy and his grandmother sat at a table nearby. The little boy had been instructed by his parents not to leave his chair until they returned, so he asked if Cupcake could visit him.

I got up from our table and carried Cupcake over, kneeling down next to him so he could pet her. As he stroked her back and told me about his two cats at home, one of those buses came to a stop at the nearby stop sign.

Cupcake must have felt too exposed where I was holding her, because she jumped out of my arms and into the closest chair, intending to hide under the shelter of the table. The only problem was the little boy was already sitting there. She ended up in his lap.

The posture of her ears went immediately from afraid to confused as the little boy smiled and gathered her close to him. He wasn’t just getting to pet the cat, he was getting to hold her! 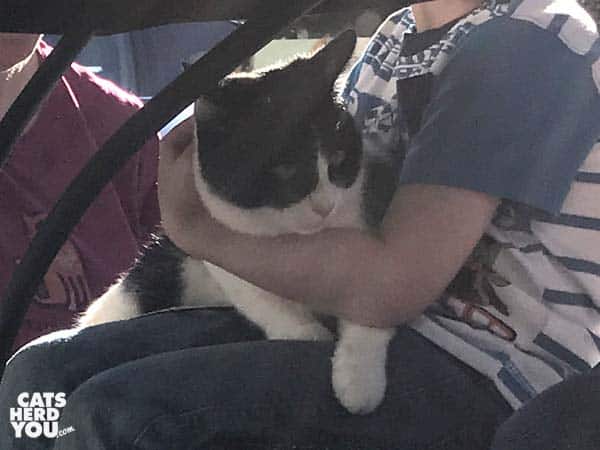 Meanwhile, my mind was racing. Cupcake likes meeting strangers, but she doesn’t enjoy being held by them. I didn’t want her to struggle to get away and end up scratching the boy.

The little boy continued to tell me about his cats as he held Cupcake. One of them was still a kitten, he explained as Cupcake cautiously relaxed a little more in his lap. Her ears twitched, and she started to listen to the sounds around her rather than just plotting an escape.

I can’t remember what we talked about, but Cupcake was in his lap for several minutes before her ears started to go sideways again. I explained to him that I needed to take her back so she didn’t try to jump out of his lap and accidentally scratch him. He was disappointed he couldn’t keep Cupcake, but he let me taker back to the nearby table.

He and his grandmother talked to us for a few more minutes before the little boy’s parents came back out of the coffee shop. The little boy immediately told them all about holding Cupcake, and carefully explained what had happened.

“Can you stay here?” the little boy interjected into the conversation.

“I don’t live at the coffee shop, but I will be here a little while longer,” I answered, not sure what he was getting at.

He turned to his parents. “Can we go home and bring our cats back?”

All of us explained that probably wasn’t the best idea, since his cats weren’t accustomed to going out in public. I’m not sure he believed us, and I’m pretty sure that when he grows up, he will have a cat who goes to the coffee shop, too. Cupcake showed us that he’s going to grow up to be a real cat guy.

After that excitement, Cupcake deserved a little treat, even if she is cutting back on the puppaccinos after her last weigh-in. 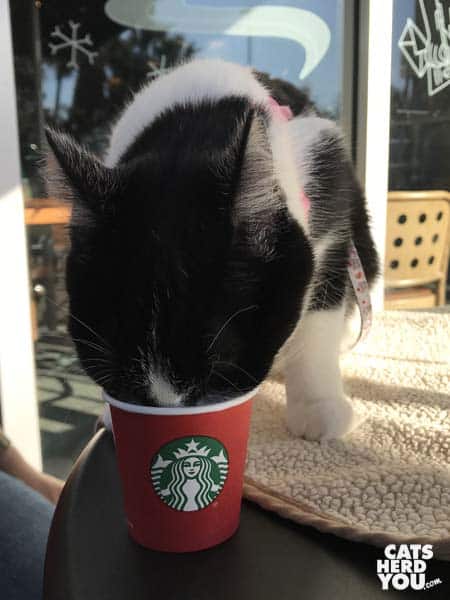 Maybe next time she can get her little treat in a cup big enough to fit her nose inside.