On a recent trip to Tallahassee, Florida, I stopped into the Tally Cat Cafe, a new cat cafe. Although the cafe has only been open since. May. It turned out to be a very special visit. 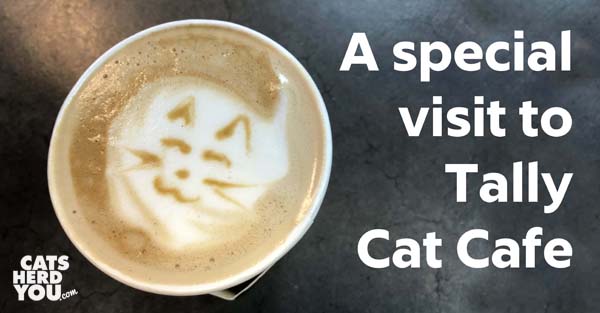 The Tally Cat Cafe opened at the end of May, so it has only been open for about 3 months. I was curious to see the place in part because it’s a cat cafe, but also because I grew up in Tallahasee and remember the storefront now occupied by the cat cafe as a pet supply store. Funny how things come full circle, isn’t it? 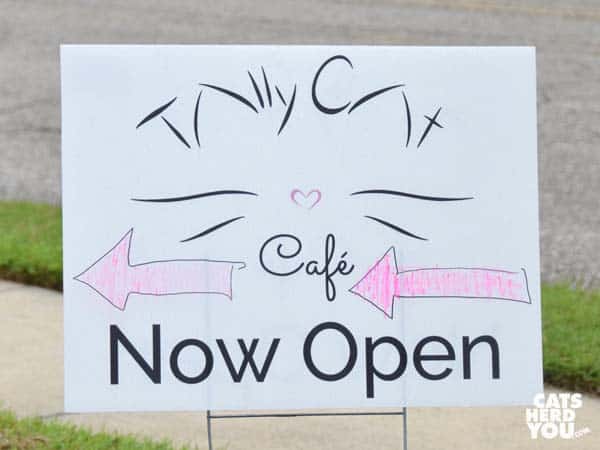 Walking in, the place looks nothing like a pet supply store. The cafe area that you enter first is painted a startling black, making the peach tones of the walls of the cattery really noticeable through the large viewing windows.  It’s an interesting contrast of the modern look of the cafe and the softer, more Southern colors of the cattery. 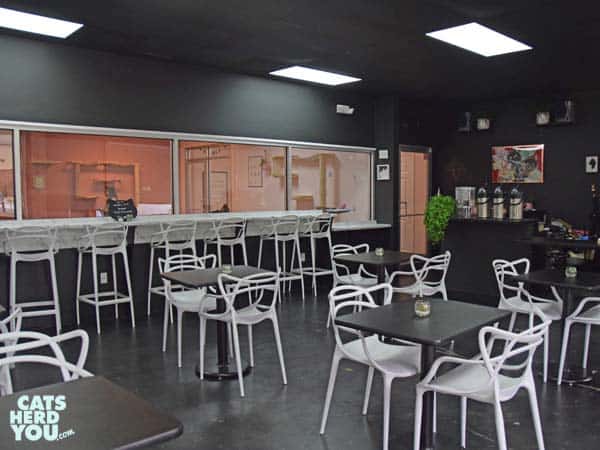 I paid for a drink and my entry fee, then headed down a short hallway to cattery. Like most cat cafes, there are doors to enter the hallway and then doors to enter the cattery to prevent escape artist cats from making a run for it.

The cattery itself is arranged with catification along the walls and mostly open space throughout the middle of the room. 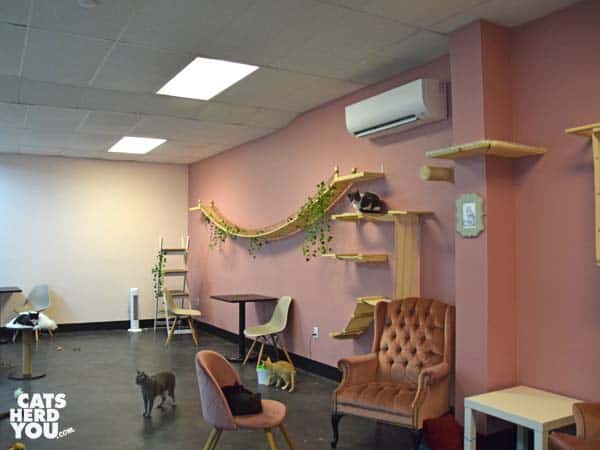 As with most cat cafes, there is a closed door leading to what I imagine is some kind of a utility room that holds the litter boxes. The arches to the litter area had cat-shaped decorative molding. I noticed the light turn on when a cat ran inside, so it appeared there was some kind of a motion sensor in the room to minimize electricity use and also allow the cats to do their business without having to go in the dark. That’s a clever idea you could use in a litterbox area at home. 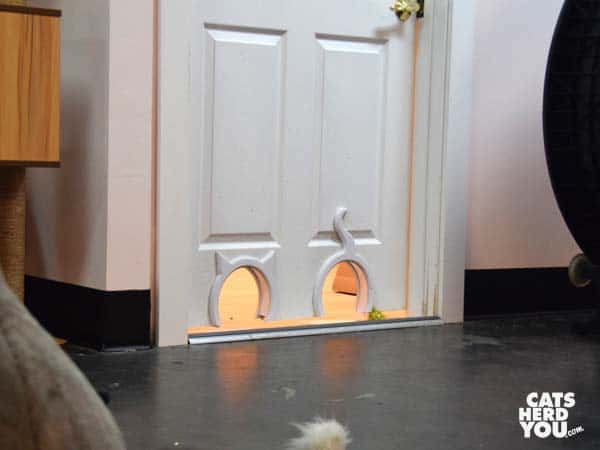 Without any other visitors, I was immediately surrounded by all of the cats who were interested in interacting with humans. I have been to cat cafes in the afternoon when all of the cats wanted to sleep, but I discovered that when you arrive first thing, the cats are a lot more interactive.

This also meant that when the barista brought my drink to me, I had a hard time being the first one to get to it. This little guy is a little young to be drinking coffee beverages! 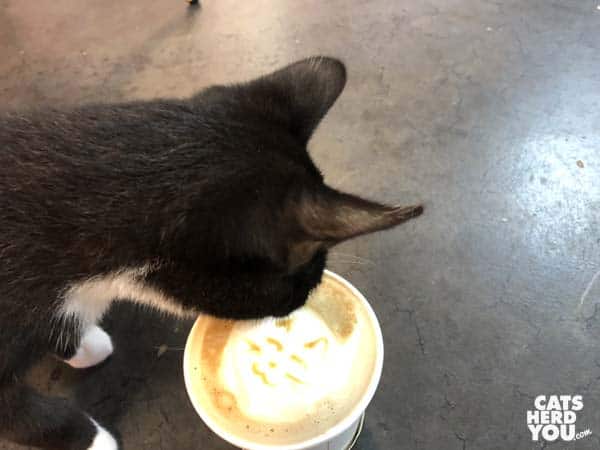 The Tally Cat Cafe partners with the Leon County Humane Society. They are a no-kill rescue organization who pulls animals from other animal organizations who do euthanize for space, like the county’s animal control shelter. According to their web site, they don’t take animals from the public. So all of the cats in the cafe were rescued to save lives in other shelters in the area. 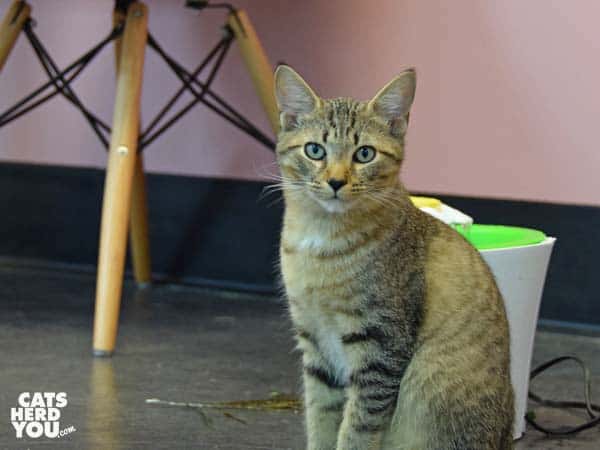 And the cat cafe has worked! In the first three months they were open, they adopted out 78 cats, which is amazing. The Leon County Humane Society reports that since January, the rescue organization has adopted out 101 cats and 151 kittens in total, which means 30% of their cat adoptions have come through the partnership with the cat cafe.

In fact, this little guy, Clooney, was adopted later the day I met him. 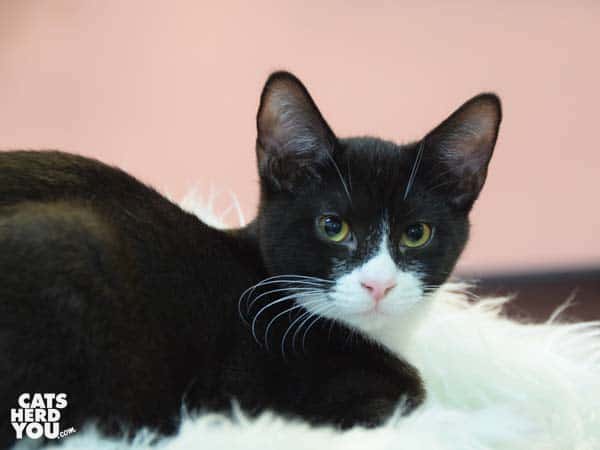 There’s a lot I don’t know about cat cafes that I would like to learn more about, including how the rescue organizations choose which cats are best suited to spend time in a cat cafe and which are better off at their adoption center.

Super-friendly cats like Clooney are obvious, but less-demonstrative but still very sweet cats, like Pamina, seem like they would be less certain choices. She took a while to warm up to me even though I was the only one in the cat cafe, sneaking up behind me repeatedly before letting me pet her. 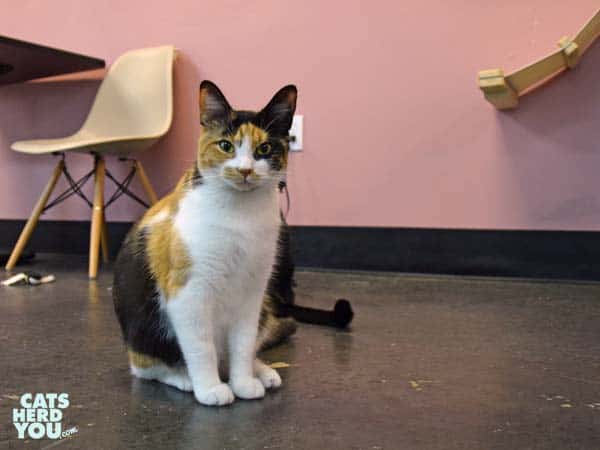 She had the same opinion of kitten antics as she did of me, but the kittens weren’t as willing to let her sit by and watch. 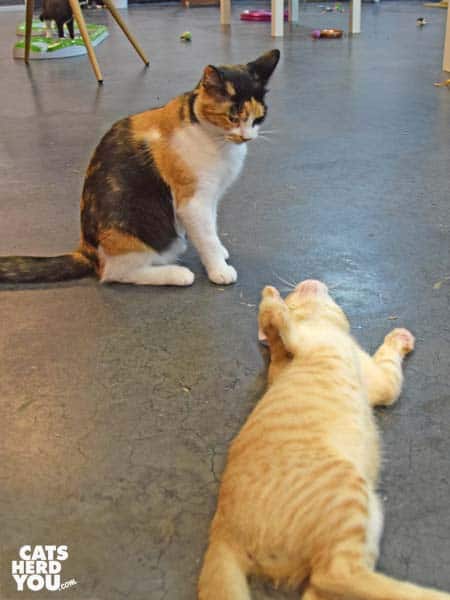 From what I was able to learn, some of the cats who seemed kind of shy, like Duck, were new to the cafe and were probably still adjusting to the environment. Duck spent a lot of time watching me, but she always made sure she had an escape route in case I approached her with my grabby hands. 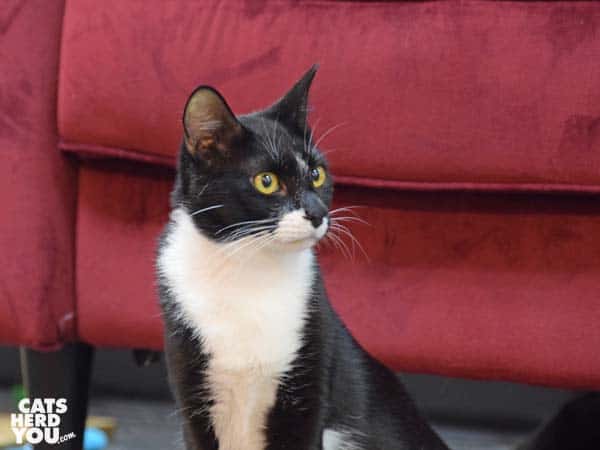 Elsa, the gray princess, put on her offended face every time I looked at her. Maybe this is why she has been at the cafe a while. Once she warmed up to me, she has the softest fur I’ve ever felt. 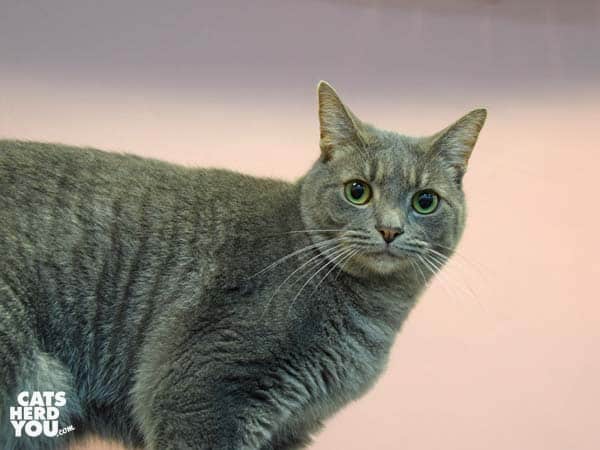 Garbanzo was all up in my business every time I turned around. He’s a very “me, me, pick me!” cat, and he was very curious about the sound my camera made. 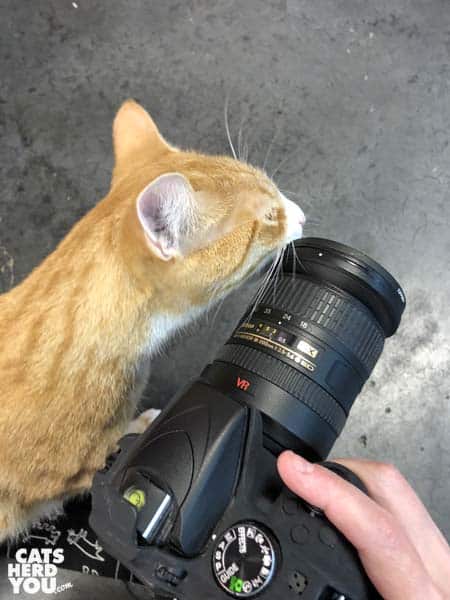 He was also fascinated by my camera strap. People who have seen me at conferences will recognize this camera strap. I felt kind of bad taking such a fun toy away from him when it was time for me to to leave.

With his outgoing personality, you won’t be surprised to hear that Garbanzo was also adopted later the day I visited. 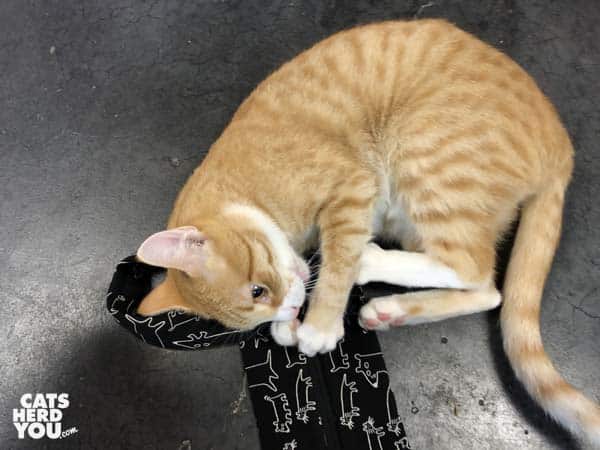 I love hearing about all the happy endings for the cats I met at the Tally Cat Cafe, and I really enjoyed my special visit there, too. If you happen to be in Tallahassee, be sure to drop in! There are new cat friends waiting to meet you. 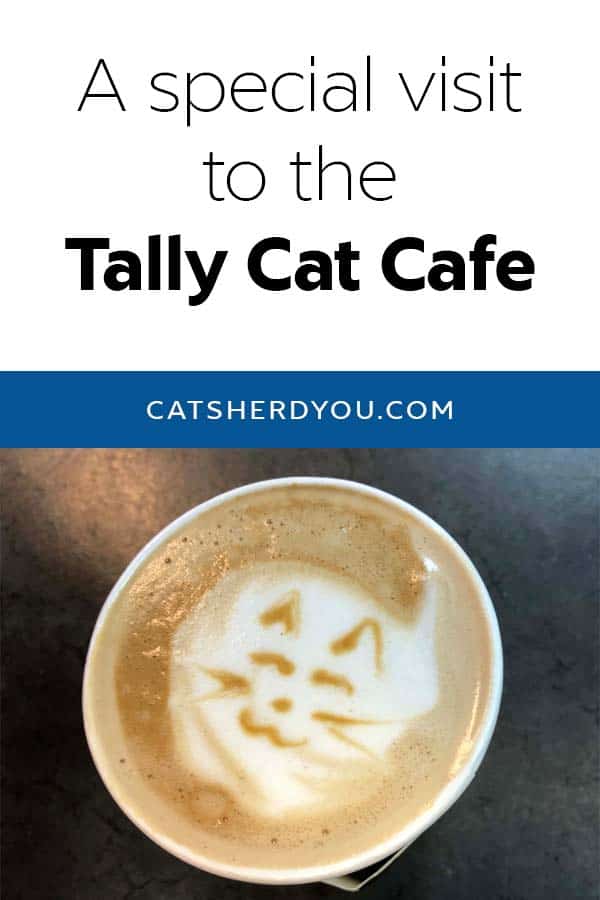