You are here: Home / Reviews / NomNomNow: Reviewing Healthy Food for our Picky Cat

If you look up “cats who prefer the cat version of junk food,” I’m pretty sure the result is just Pierre’s photo. 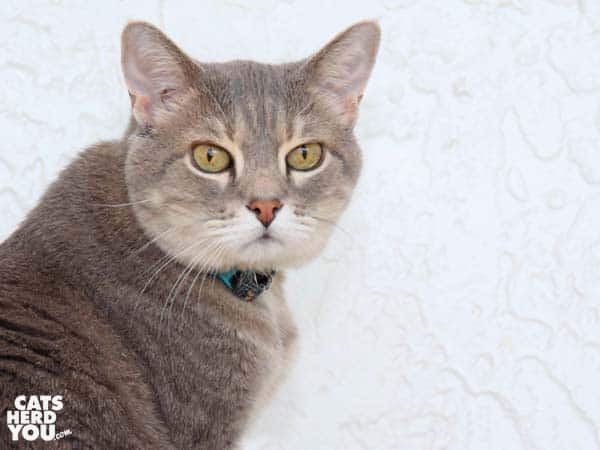 Especially after his recent bout of pancreatitis, I really wanted to find Pierre a healthier food that he will actually eat. I have been thinking that home cooking his meals would be the way to go to introduce fresher ingredients while making sure he had a balanced diet. But there’s a problem: I am terrible in the kitchen and barely cook for the humans around here. There’s no way I would be able to keep up with cooking for Pierre, too.

I told the folks at NomNomNow Pierre’s age and weight, and they calculated a good portion size for him. There was also a place to provide a target weight, so if he was underweight or overweight, I could include the weight he should be to help identify a good portion size.

This was a useful tool, since I suspected his ideal amount of gently cooked food would be different from his usual amount of canned food. It turned out my suspicion was right, and he needed less NomNomNow than the heavily-processed canned food, a little over 2/3 of the quantity I was used to feeding him.

I also selected from the NomNomNow food formulas. They offer a chicken-based option, named Chicken Chow-Meow, and a fish-based formula, named Flavorful Fish Feast. I don’t know why the fish formula doesn’t have a cute name like everything else there. It should! Even if it did, I would still be limiting Pierre’s fish intake, especially after his pancreatitis attack, so I chose the chicken formula for him.

Both formulas include more vegetables than I prefer seeing in a cat food, and I was a little worried that Pierre would be turned off by them. We waited for the first shipment so we could see.

Before Pierre’s first food shipment arrived, I got emails telling me what to expect. They explained that the food would be packed with enough cold packs that it would remain cool until at least 10 pm if I wasn’t home to receive the delivery. This is a good thing, since my porch is in the direct Florida sun in the afternoon.

When the NomNomNow box arrived, it came in a nice box with plenty of cold packs. The inner packaging is an insulated, foil faced thing that reminded me of the stuff you sometimes see used for car sunscreens. The result was there still being plenty of cold inside, even though the box was sitting on my porch in the 90-something degree heat, in direct sunlight. 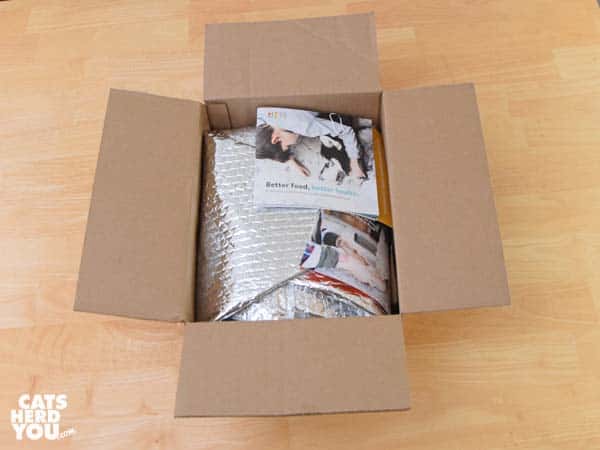 The people at Nom Nom Now were really thinking ahead. They just started shipping their complete meals for cats recently, but they are prepared for the fact that cats don’t adapt instantly to new foods. They sent samples of beef broth and powdered topper to put on the food to help a cat adapt to the new food.

Food arrives packaged in individual meal packets. After spending years weighing raw food for my cats for each meal and then years before that estimating fractions of cans, being able to open a packet and having it be a meal for a cat was so nice and easy.

The food itself looks like something you might eat. It smells nice, a little chicken-y, and you can see the little vegetable bits in it. NomNomNow sources all of their USDA-certified food ingredients from restaurant suppliers in the San Francisco Bay area, and the food looks fresh and not over-processed.

We added the topper and put it in Pierre’s usual eating place, his Sure-Feed microchip feeder. He was tentative at first, but then he dug right in. Picky cat success! 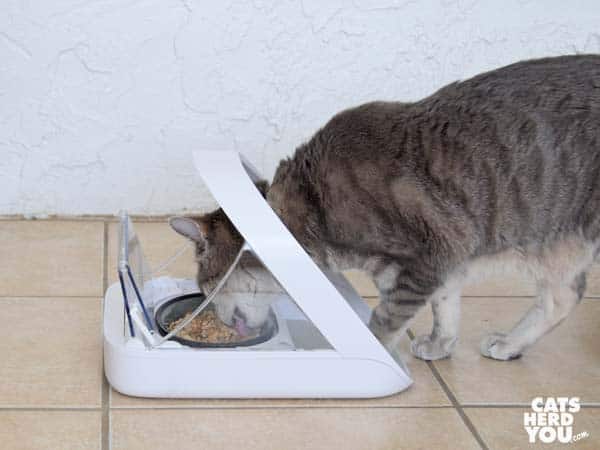 When you order from NomNomNow, your second shipment comes with emergency meals to help tide you over in case your delivery service fails for some reason. You don’t want to risk being left without cat food, so this is a really good thing!

I used the emergency meals to test how Ashton and Cupcake liked the food. Cupcake was confused about the change from her usual meals at first, but once she realized this was dinner, she ate it. Ashton was an even bigger fan, eating every bit and leaving a clean plate the first time we offered it to her for dinner. All in all, we had a 3-for-3 success rate with accepting the new food, since Newton is on a special diet and didn’t get to participate. 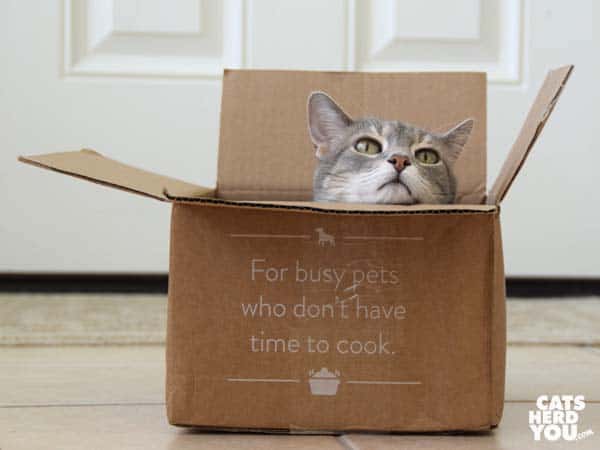 I love the convenience and freshness of NomNomNow’s food. It’a a great way to be able to feed your cat something that’s not over-processed. I think it’s especially worth looking at for people who hesitate to make the leap to a raw diet or don’t have the time to cook for their cat at home.

If you want to try NomNomNow for your cat, they offer 20% off your first order.

FCC Disclosure: This post is sponsored by NomNomNow. We received the product for review at no charge. Receiving free product did not influence our review in any way. All sponsored posts always reflect our honest and unbiased opinions and feature products and information we feel is relevant to our readers.