This is the time of year when so many people are trying to think up thoughtful gifts for loved ones, the question comes up about whether it’s all right to give cats or dogs as gifts. The prevailing wisdom is that this is a bad idea because the recipient is likely not to be as attached to a pet that they didn’t pick out themselves, and most shelters and rescue groups don’t like to adopt out pets as gifts for fear of seeing them relinquished back again. 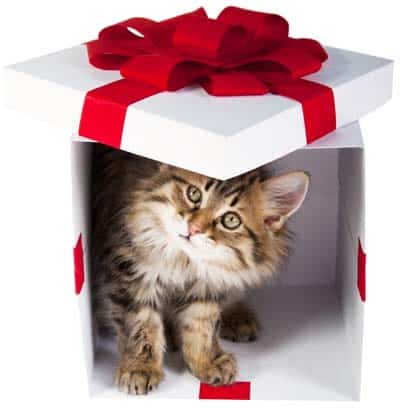 Studies of shelter statistics over the past fifteen years on the subject have actually shown that these fears are unfounded, and that relinquishment of previously-gifted dogs and cats to shelters is actually lower than from other sources. Odds of a cat being relinquished to a shelter were higher when the cat was acquired from a shelter, as a stray, or from a pet shop than receiving the cat as a gift.

The vast majority of the survey respondents in the a 2013 ASPCA study who had received a pet as a gift said that it didn’t hurt their love or attachment to the pet, over half said that it increased their love for their pet. People actually believed they had stronger feelings for their pet because he or she had been a gift.

With shelters and rescues overwhelmed with homeless cats, does this surprising information make you wonder whether animal shelters and other rescue organizations can safely rethink their policies on giving pets as gifts?

Reference: MPDI, Should Dogs and Cats be Given as Gifts?
Photo credit: depositphotos/45arseiy