You are here: Home / Rescue / Friends in the Attic

Newton: Wake up! I hear something! 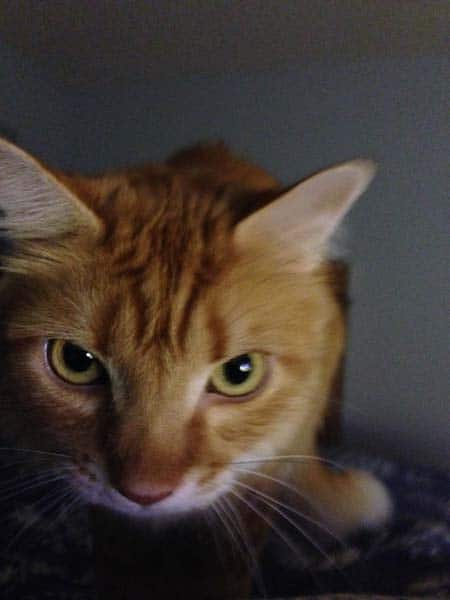 That’s how it started. Newton heard something.

It’s easy to write off a sound or two in a 30 year old townhouse at night as being from the structure itself cooling from the day’s heat, or something the cats are doing in the other room or… well, something easily explained. Not intruders.

But the sounds continued through the night. Tearing sounds. Loud thumps. The sound of something being dragged across the other side of the drywall right over my head. It was a very long night.

Daybreak exposed the truth outside. 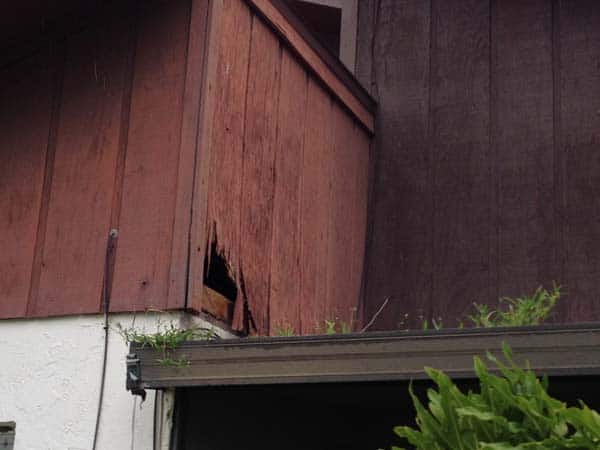 Wood rot we hadn’t noticed hadn’t gone unnoticed by someone, who used the neighbor’s screened porch as a perfect way to access it and make a hole for entry into our attic. The tearing sounds I had listened to during the night were pieces of wood being ripped away from the corner of the house!

Ben the wildlife guy came out to assess the situation. He emerged from a trip up into the attic and announced that he had found a raccoon with a litter of cubs. “You haven’t heard them?” he asked incredulously. “I could hear them from over ten feet away, but she was sitting on them way back in the corner, so I couldn’t reach them.” He explained that the plan would be to bait traps and catch the mother raccoon, then collect the unattended babies. “She isn’t going to let me get the babies and let the use them as bait.”

I agreed, and while Ben went to get his traps, I texted my sister to tell her the news. Unfortunately, autocorrect and I are not friends, so this actual conversation happened: 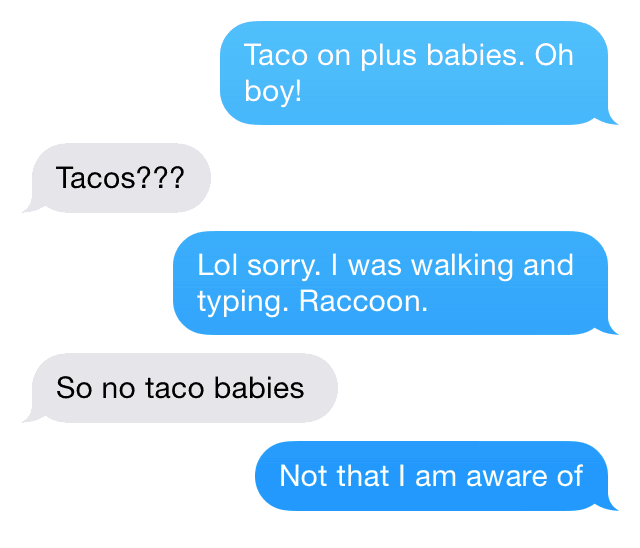 Ben set his traps, baited with marshmallows. He explained that marshmallows are ideal bait for raccoons because they don’t attract a lot of other animals that would likely be caught in the trap, like cats or dogs. I’m quite sure that Ashton will eat marshmallows, but she was not allowed outside to test the hypothesis. 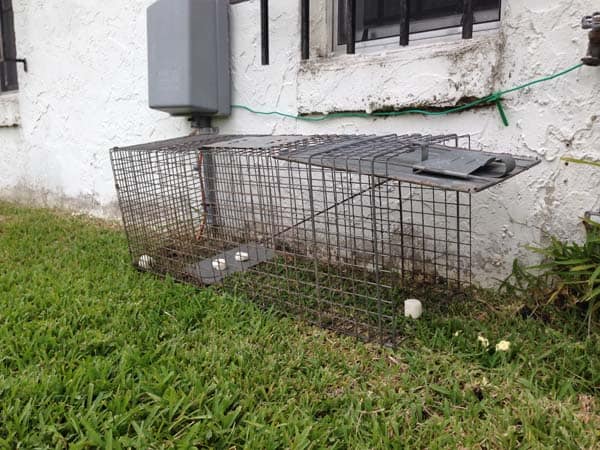 Then there was nothing left to do but wait for dark, and to wait through the night for the mother racoon to take the bait in the trap. During the night, the babies became audible, so along with the sounds of walking in the attic, there were squalling cubs all night.

Newton: I’m just going to sit here all night and watch this trap. I’ll tell you if I see any raccoons. 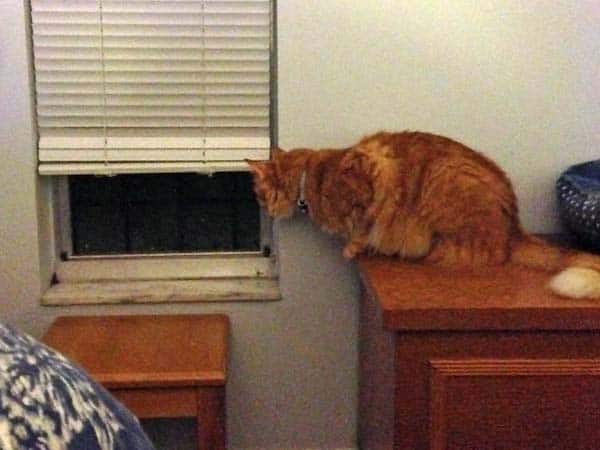 Unfortunately, in the morning, both traps were still empty. Ben the wildlife guy said he wanted to give it a second night before going to plan B.

I went to work, worried about the hole in the side of my house while we were having record rain, and my coworkers wanted to hear what was going on. When I told them the story about the autocorrected text message about the taco babies, one coworker said that was how they should be named. “Taquito, Salsa, Bambino, Queso…”

So now I had an attic full of raccoons with names. You don’t have to keep them if you name them, I wondered, do you?

The next night, I could hear the taquito gang making noises up there when I went to bed, and it took a long time to go to sleep. I hadn’t slept properly in days because of the ongoing noise from the attic, and I finally dozed off. At about three o’clock, I was jolted awake by something so loud that I thought it was my smoke alarm. Once I was oriented, I realized it was coming from the attic.

Newton: What are they DOING up there? 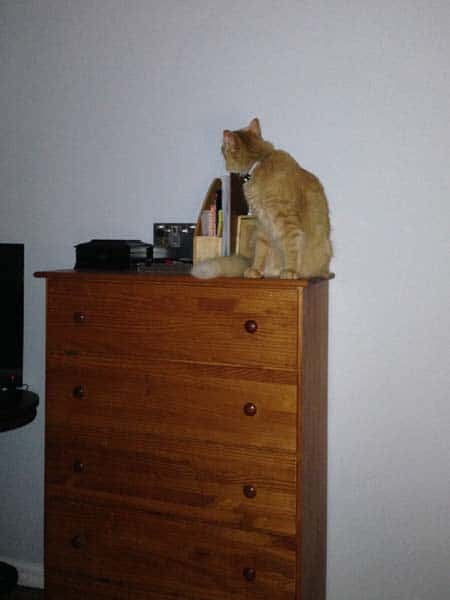 It sounded like it might be the raccoon babies, and the screeching went on and on. What was going on up there? If some other animal had invaded the attic and was killing them, they would go quiet, I thought, but they didn’t, not for a very long time. I finally slept a little more, and after I woke, I didn’t hear anything else.

As soon as it was light, I went to check the traps. Still empty. Mama Taco was too smart for the traps, I reported to Ben the wildlife guy. He assured me that he had another plan, but the first thing he did when he arrived was go up into the attic to take a look. He emerged to report, “She’s gone. They’re gone. I looked all around the attic, and she didn’t just move them to another spot.” Apparently, baby raccoons get very loud when the mother starts to move them one by one, and that’s what I had heard during the night.

We went to the back of the house, and Ben climbed up onto the ladder to recover the hole with plastic to keep out the rain until a contractor could fix it properly. While he was up on the roof, he said, “Wait, I hear them.” And a moment later, “I see them!”

The baby raccoons had been left out in the open among the littered leaves on of a neighboring townhouse’s porch roof. 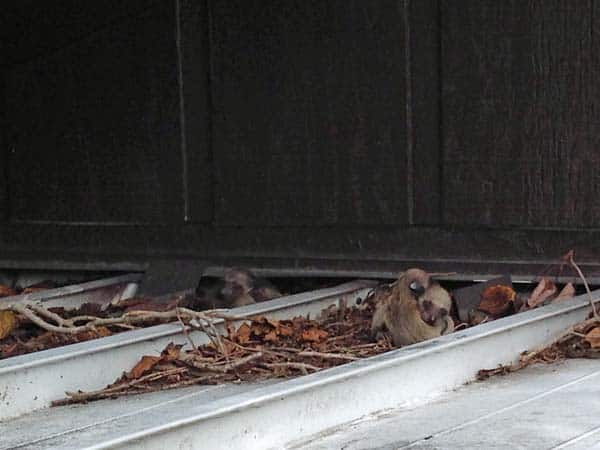 Ben brought them down from the roof in a pillowcase. They were tiny, blind and helpless. And really cute. 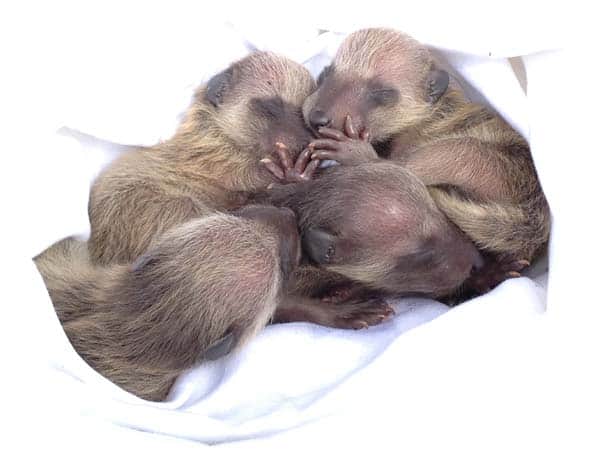 And coincidentally, there really were four of them to assume their taco-inspired names, too. It was like fate. They really were the taquitos!

I asked Ben about the babies being left out on the open like that, and he admitted he had never seen that before. I had a feeling that my raccoon eviction was turning into something else entirely, but Ben had a new plan. The baby raccoons would become bait for the humane traps so that both they and their mother would be able to be relocated together. Ben assured us that the mother would probably come for them within a few hours. 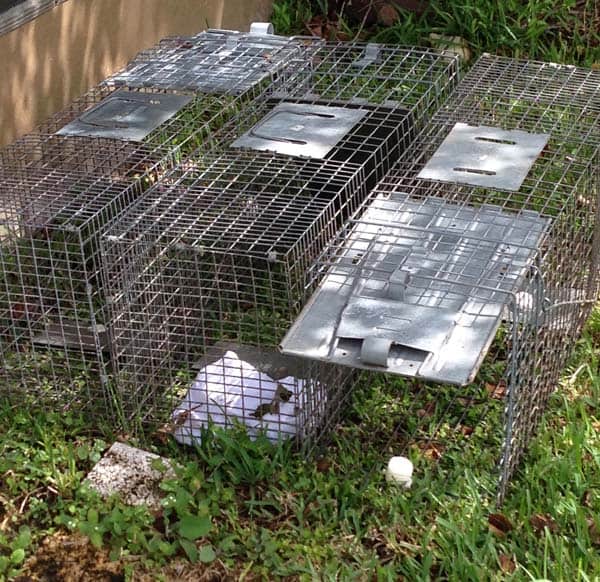 My awesome neighbor helped watch over them through the day, making sure they were covered when it rained so that the pillowcase holding them didn’t get sodden. But by dusk, there was still no mother raccoon.

Ben asked for one more night, since the nocturnal mother raccoon was bound to return under cover of darkness for her young. I agreed, but worried about them getting cold. They hardly had any fur! Then I remembered the microwaveable heated disks I use on the coldest days of the year for the cats.

Newton: My heated disk! And it’s not even winter? Score! Wait…. why are you taking that out the door? It’s mine! 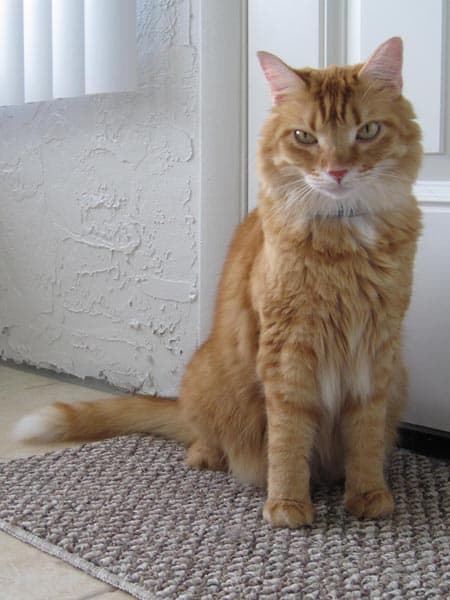 Now I was in trouble with Newton and had to wait all night, wondering about the welfare of the baby raccoons, who hadn’t eaten since the night before. I startled the neighborhood deer going out to check on them after dawn. There was no sign of their mother, and they were sluggish and almost silent, and they were barely warm to the touch. The heated disk had grown cold during the night.

The raccoon eviction had turned into a rescue. The mother raccoon was obviously not coming back before Ben arrived, so I reheated the disk and bundled the taquitos into a small cardboard box to help hold in the heat. I returned them to the trap for their own safety, since I didn’t want a neighborhood off-leash dog to decide they were a snack. A while later, I checked on them, and they were much more lively, chattering away when they felt the cage move. You can’t see them in this video because I left them tucked in for warmth, but you can hear what anxious little raccoons sound like.

(If the video doesn’t display for you above, you can visit it directly on YouTube.)

Finally, Ben arrived to pick the little taquitos. I was surprised how sad I was sad to see them go. I had wanted them gone from the attic so much that it never occurred to me that I might end up feeling so responsible for them. Not knowing what else I could do to help them as they went on their way, I sent the heated disk along with them for their short ride to Back to Nature Wildlife Refuge.

Bonnie at Back to Nature has been in touch with me with updates. So far, they lost the smallest raccoon baby, the extended period of time with no food and dehydration too much for her. The others are struggling along. I’m trying to figure out whether I did the right thing for them by not insisting they go to the refuge sooner, but it’s easy to second-guess. I’ll be trying to figure this one out long after the contractors finally have the attic wall sealed back up again. 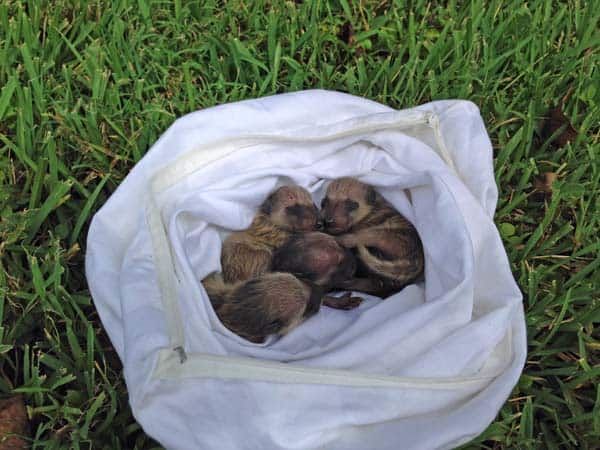 So keep your attic sealed up nice and tight or you might end up making some unexpected friends — or an unexpected rescue — too.