You are here: Home / Life With Cats / Don’t Just Bite It

There was a disagreement on the internet about a cat meme recently. A graphic designer known for colorful cat-themed t-shirts made one of the million “just do it” memes that flooded the internet in the past week.

This meme pictured a black cat, with the text “Bite someone for no apparent reason. Just bite them.” The first time it showed up in my Facebook feed, I cringed at the implied message that cats were unpredictable and willfully mean. But I also saw the graphic had lots of likes and shares, and I didn’t want to joust the windmill on the internet. It has continued to bother me, though.

About Cats Who Bite

The thing about cats that bite is that unlike that meme implies, most of them do give at least a tiny bit of warning, if you know how to look. It might just be a flick of a tail or a change in the angle of the ears, but cats do tend to telegraph their intentions. 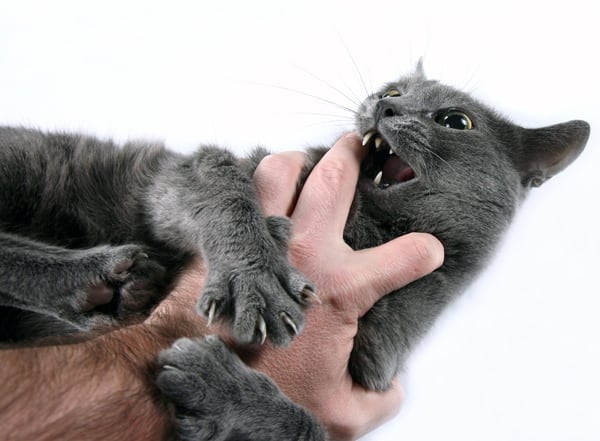 Cats who don’t give the expected warning signs sometimes gave up on trying to communicate “I’m done now” when their humans consistently didn’t pick up the cues. Unfortunately, We humans aren’t so good at picking up the subtle signs, so often cats get labeled unpredictable or ill-tempered when the human just didn’t know when to say when.

My Cat Who Bites

The truth is that I have a biter who doesn’t give much warning. And it’s not funny. It worries me.

My cat who has a tendency toward biting gives very small warning signs, the kind that are easily overlooked, like dilating pupils. It’s okay with me because I know how to read those tiny signs, but I know that many people can’t.

It worries me to think what would happen if my cat ended up at a shelter and behaved that way. Do you know what happens to cats who bite? Your local animal control considers cats who bite a rabies risk even if their rabies shots are up to date. They are quarantined for ten days. That’s supposed to happen for bites that happen at home or in an animal shelter. 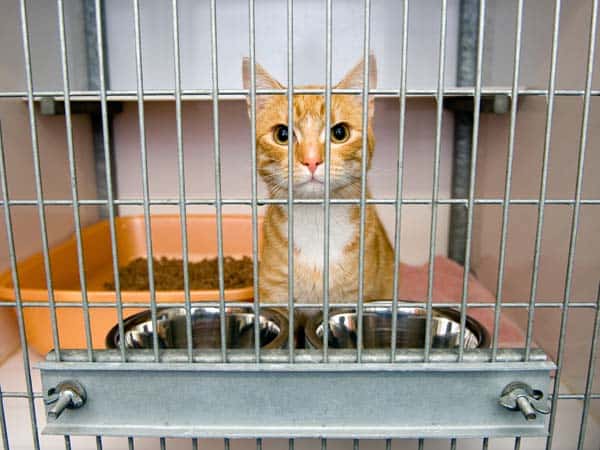 FIV positive cats can have longer stays in shelters because people are afraid to adopt them. Photo credit: depositphotos/Buurserstraat38

If there’s any doubt about the cat’s continued behavior or health during quarantine, they are subjected to rabies testing. Rabies testing is done by killing the cat, removing the head, and shipping it away for a laboratory for testing.

So no, I don’t really think cat biting is much of a joking matter. It could have dire consequences.

Biting can be a death sentence even if there’s no rabies testing involved. Cats who bite and end up in shelters are considered unadoptable and are put down. That happens even in many no-kill shelters.

No one wants to hear about a cat being put down for being a biter. Some people defended sharing the meme that implied cats bite for the fun of it was just stating the obvious because “cats are jerks.”

I’ve talked before about the fact that cats aren’t jerks. Cats are just cats, and they follow their instincts.

Cats are following their instincts when they bite, too. There’s a reason for their behavior, whether it’s overstimulation or feeling threatened. If you can step back from the situation and take a look at it, you can often see what caused the cat to feel they needed to bite. When you identify the cause, you can prevent it in the future. 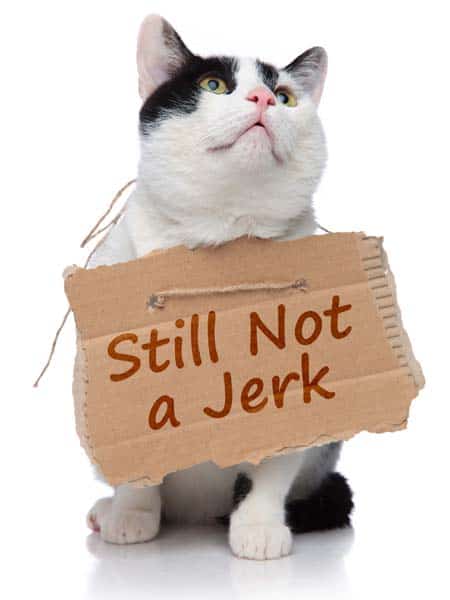 Unfortunately, there are a lot of people who just want to say, “My cat is a jerk” instead of analyzing what happened. They are missing out on a deeper understanding of the cat they share their life with, and they may be setting themselves up to repeat the situation again.

That just helps perpetuate the myth that cats are unfriendly and unlikable, and it doesn’t help to get more cats into happy homes. Isn’t that what we all want most of all?

I understand that many people surf the internet to find a good laugh, not to learn a lesson, so they don’t want to think too hard about memes. They just click the heart icon or “like” and maybe share the meme if it made them laugh.

If we all took an extra second to think about the message being sent by the memes we share on social media, we could prevent the entrenchment of more misconceptions about cats. Ask yourself how the same message would sound if it was about a dog. It wouldn’t be good to share “funny” messages about dogs biting unpredictably, would it? Then maybe hold off on sharing the cat biting meme, too. For cats’ sake.