Have you ever noticed that when you carry an umbrella, it doesn’t rain? It only rains on the days you forget the umbrella at home.

Cat carriers seem to work the same way. A long time ago, I kept a carrier in my car’s trunk, and never ran across a cat in need of rescue. In the past few years, I was out of the habit, and sure enough, I repeatedly ran across rescues that required carriers and didn’t have them.

One of those rescues was Ashton. I was fortunate that she was small enough at the time to fit into a bin of odds and ends I kept in my trunk and hastily emptied for the rescue. If she had been uninjured, that wouldn’t have contained an active kitten. 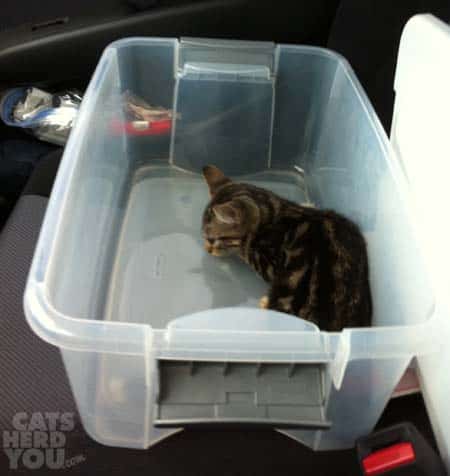 Another was a friendly cat outside a restaurant. One of the waitresses told me that the had been begging there for weeks, and that the waitress had been trying to catch her. I didn’t have anything to put her in, and we had to wait for the waitress’s boyfriend to arrive with a cat carrier before catching her and sending her off to her new home with their family.

That was when I decided I needed a carrier in my car. The problem was that my trunk area isn’t that big. I have to be able to carry groceries home in it, too. That led me to look into collapsible carriers. Surely there were plenty of them out there, right?

I was surprised how few there actually were. Sure, there were plenty of fabric bags you could use as a carrier, but that wouldn’t work when you were rescuing a strange cat. You need something with hard sides to prevent escape. It also should be something you can decontaminate later, or it might not be safe to use again.

I finally settled on the Care-Eze folding carrier 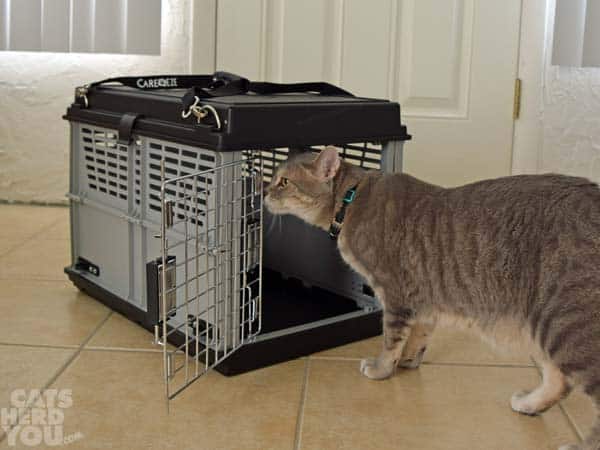 It folds down to only 4 1/2″ tall. When it is assembled, it is about the size of my medium, hard-sided carriers. Just what I was looking for. And even better, it has been like a cat umbrella. In the year I have had it, I haven’t needed to unexpectedly transport a cat! I even had it with me during my recent trip to Atlanta for BarkWorld/MeowWorld, and I managed not to bring back any additional cats. It’s like magic.

I gave a ride to other cat bloggers to and from the airport last month at BarkWorld/MeowWorld, and none of them never knew I had a cat carrier with me, riding along with their luggage. The size difference between it and a standard carrier makes it almost unnoticeable in the trunk.

Just recently, I ran across a photo of a different kind of folding carrier that got my attention. The Sport Pet Collapsible Travel Carrier looked interesting because it has a huge door that takes an entire side of the carrier. This is something I usually want when Ashton, Newton, or Pierre need to go into a carrier, so it makes sense that when I do finally need to use a carrier for a strange cat who doesn’t even know me, it would be a lot easier to put a frightened cat inside. 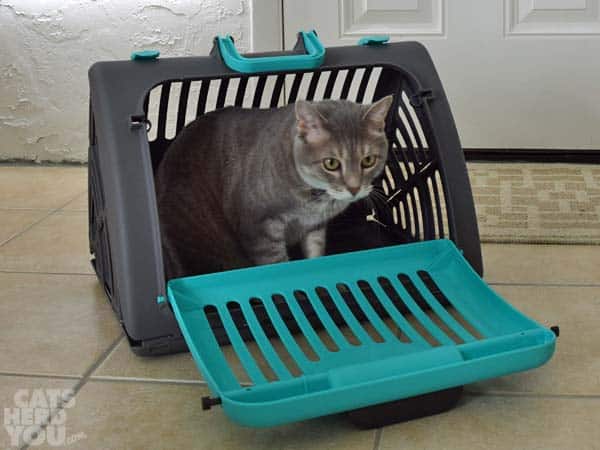 Of the two carriers, the one by Care-Eze is easier to assemble. I found the pieces on the Sport Pet carrier a that need to slide to secure the curved sides a little fiddly, and you have to be sure to latch it securely on top during assembly. But the Care-Eze carrier is a lot louder and rattles more, and Newton, Pierre, and Ashton were all afraid of it, even when it was inside their own house.

The Care-Eze carrier feels more durable, but both feel like they would hold an angry or freaked out cat. I found the Sport Pet carrier for less than half of cost of the Care-Eze carrier, so that may be a consideration. Someone in full-time rescue who is constantly moving cats would want something more durable than either one of these carriers, but both of them will let you fit a carrier in your car’s trunk and still have room for groceries. If my experience is any guide, they’ll serve as your “cat umbrella” against unexpected cat transports, too.

Disclosure: This post contains affiliate links, which means we get a small commission for our cat treat fund if you purchase after clicking the link on this page.