You are here: Home / Tourism / Cats at the Crab Shack

Over Labor Day weekend, I visited the Savannah area. One of the places I went was an area seafood restaurant on Tybee Island, The Crab Shack, that doesn’t just feature amazing seafood. It also features lots of resident cats.

One of the first things you see when you arrive at The Crab Shack is a pool with alligators in it. They work with an organization in Florida to care for baby alligators until they reach four feet, then they go back in exchange for new, little alligators. This kitty was snoozing beside the alligator pool. Don’t worry, the alligators are on the other side of the chain link fence in the background! 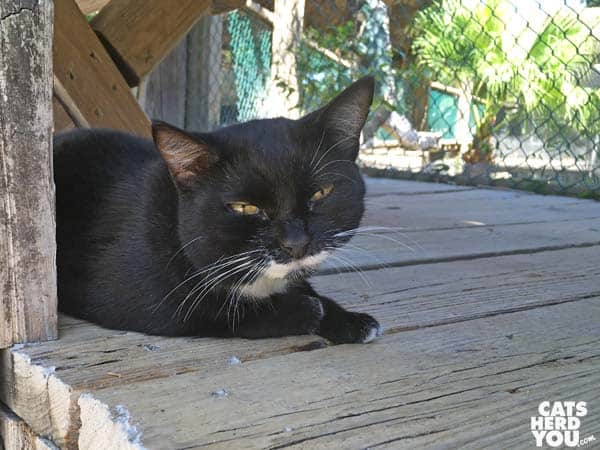 The hostess stand at the front of the restaurant has a sign letting patrons know that the cats are cared for and shouldn’t be fed. Do you think the dozen resident cats ever read the sign? 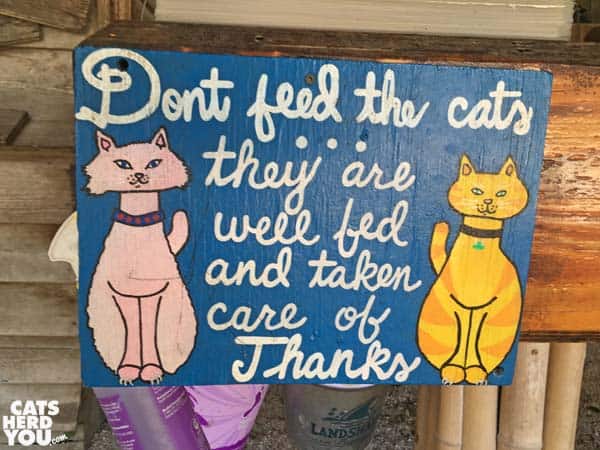 The restaurant was once a fish camp, and seating includes screened-in areas (no cats allowed!) and a deck that overlooks Chimney Creek. What self-respecting cat could resist checking out the potential handouts in a place like this, especially when most of it is enticing seafood? 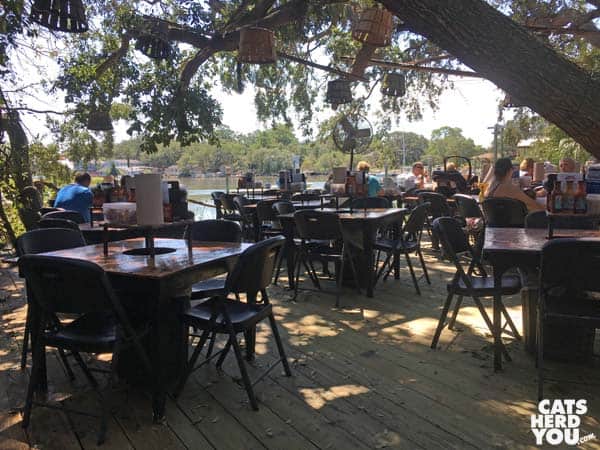 We were there at the beginning of lunchtime on the day after tropical storm Hermine came through, but the cats weren’t bothered by the extra debris on the deck or the thin early-lunch crowd. Patches the tortoiseshell came to check out what we were eating.

It’s pretty obvious that despite the signs asking patrons not to feed the cats, some of the cats have learned to really work the dining area. It must be impossible to put a kitty like Pretty Girl on a diet under those circumstances! 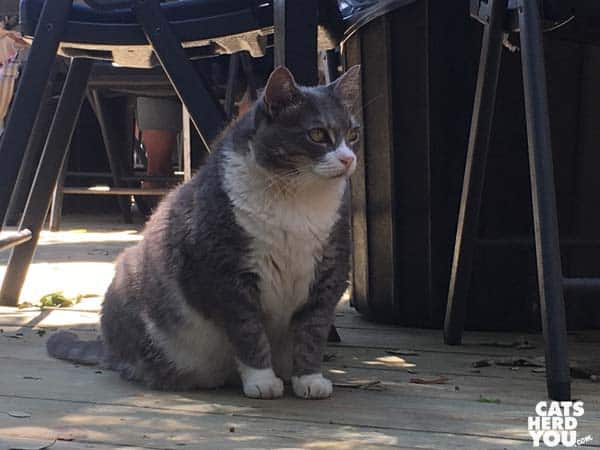 Especially when she gives humans The Look. She really knows how to melt human hearts. 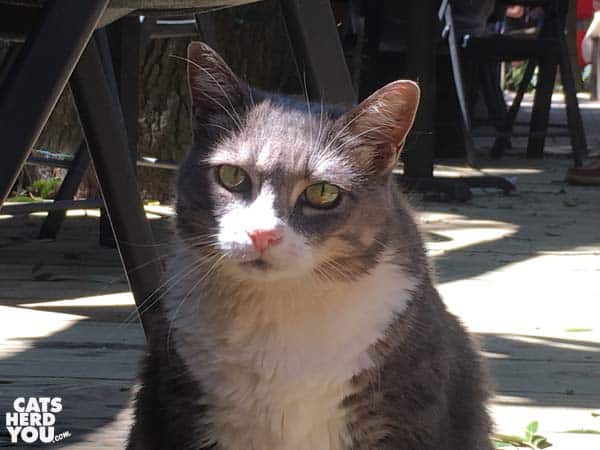 Signage explains that the cats at The Crab Shack are “not feral, they are family.” Perhaps that explains why the majority of them aren’t ear-tipped like feral cats.

The way the cats are clearly relaxed around people is another clue that they aren’t feral. Smoky was napping half in and half out of the shade, ignoring strangers walking past. 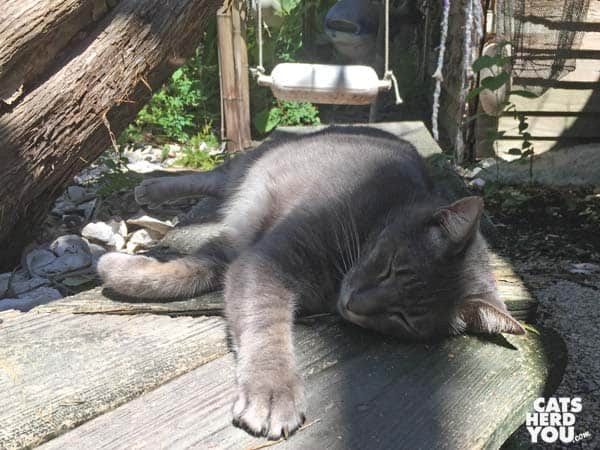 Cat shelters near the entrance to the gift shop have food available for cats who aren’t really into seafood. 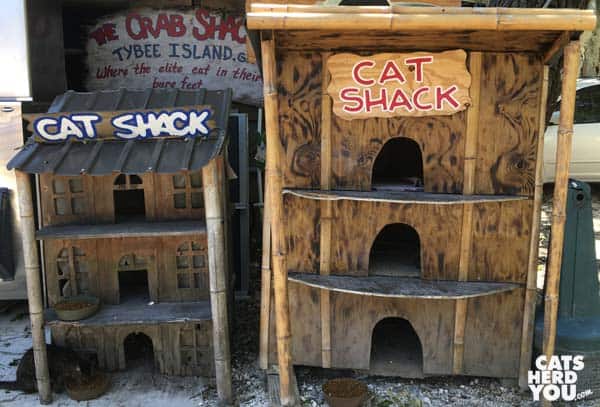 Mr. Puddy wouldn’t even look up from his meal outside the Cat Shack shelter for a photo. 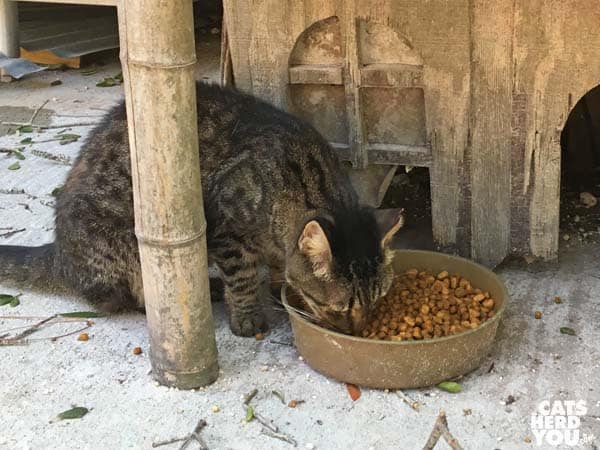 While Boris the big Russian Blue snoozed inside the shelter, along with some leaves that probably blew in during the previous day’s storm. 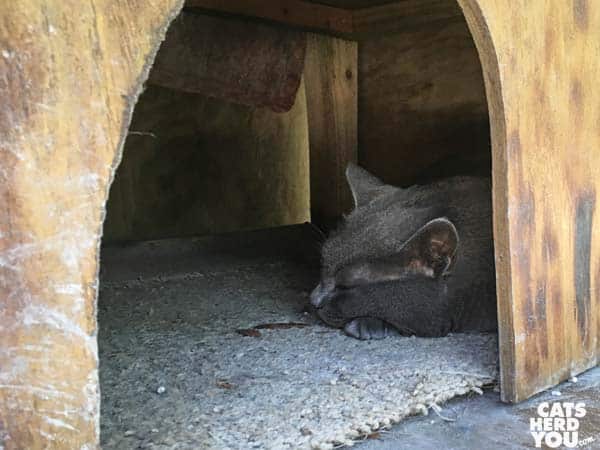 By the time we left, Mr. Puddy was in the parking lot to see us off and welcome more lunch-hour visitors. 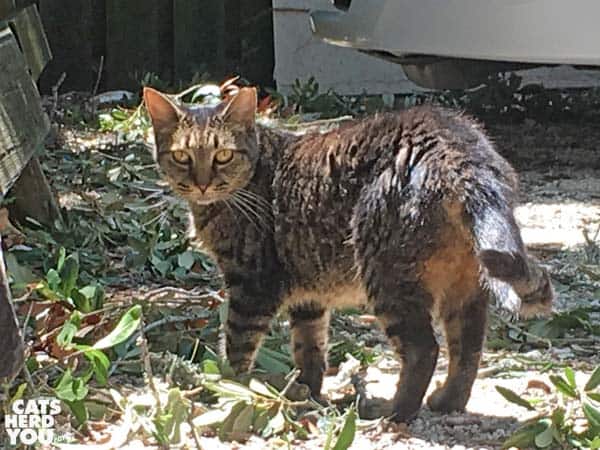 When you’re far from home and your own cats, visiting a place with friendly cats is always fun, but the Crab Shack cats were a special bunch. I look forward to returning to see them again!