You are here: Home / Life With Cats / Cat Cafe Fundraising Night at The Kitty Beautiful

Last week was a movie night — or mewvie night — fundraiser for The Kitty Beautiful, a cat cafe planned for downtown Orlando.

It’s kind of a quirky name, but there’s a reason for it: Orlando is nicknamed “The City Beautiful,” so the new cat cafe’s name is going to be a cute play on words that will only make sense to locals.

When I was nearly to the fundraiser at the future cafe site, I ran into one of the fosters from Candy’s Cats who was juggling her kids and three foster cats. I offered to babysit this little guy for her long enough for her to park her car. 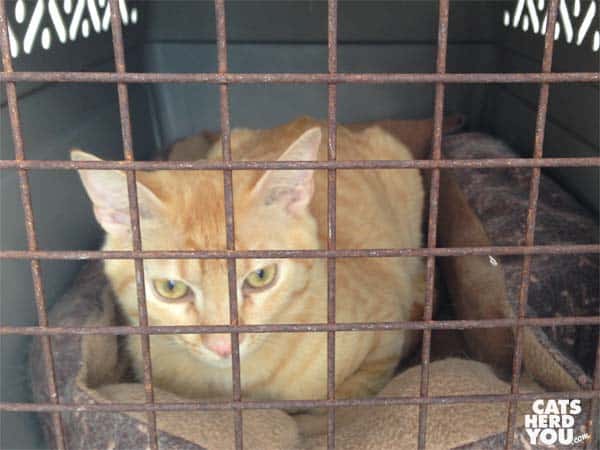 The unfinished window was still papered over when I got there, with a small paper sign letting me know I had found the right place. 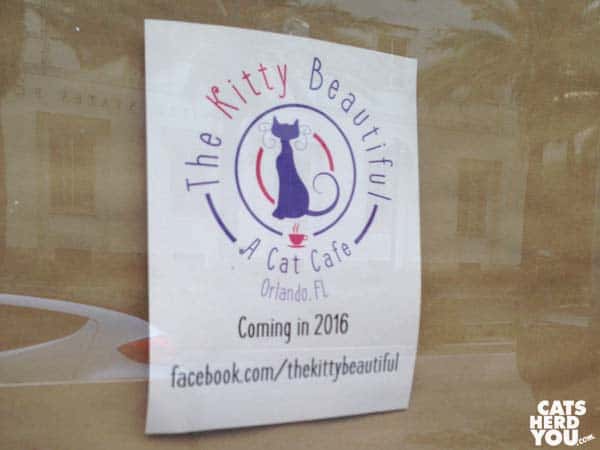 But the paper covering came down from the windows and everyone was welcomed in for the fundraiser. The wall along one side of the room was painted with chalkboard paint, and this message was on the wall: 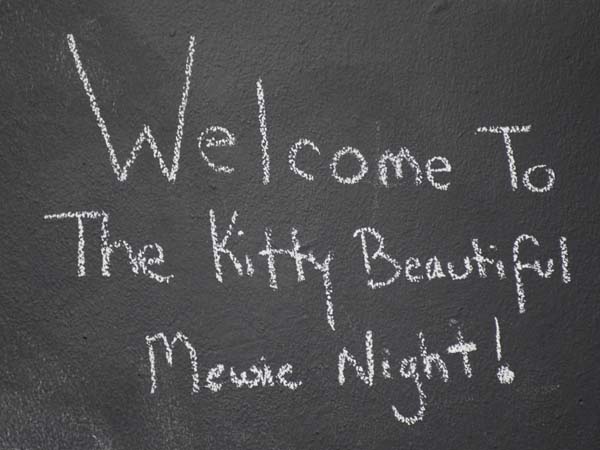 The opposite wall had kitty art by local artists that you could purchase. This piece is titled Mew, and it is from Purrito Press. How’s that for a mathematically geeky cat joke? 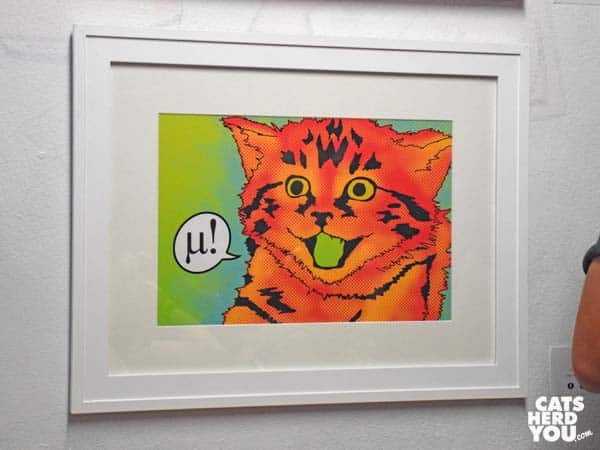 The place got crowded in a hurry. Crazy crowded! This photo was taken around the time they stopped allowing people in due to capacity. 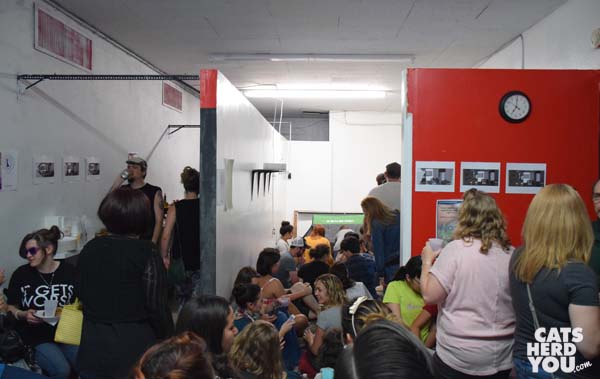 You can see in the photo above that the space itself is rather narrow and deep. They had renderings to help you visualize what was going to happen after the cafe was built out. The red wall in the photo above would be removed, replaced by glass doors leading into the enclosed cat area. 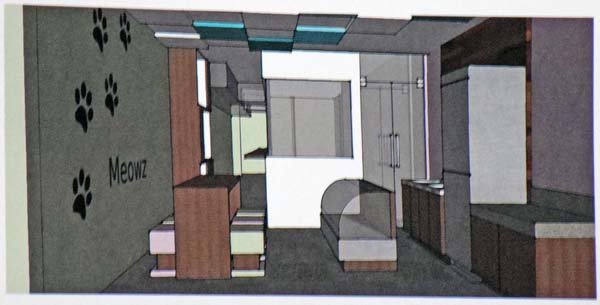 Candy’s Cats, a local rescue, will be providing adoptable cats for the cat cafe once it opens. For the fundraising night, they brought both kittens and juvenile cats to visit with the cat cafe supporters. Like this adorable kitten: 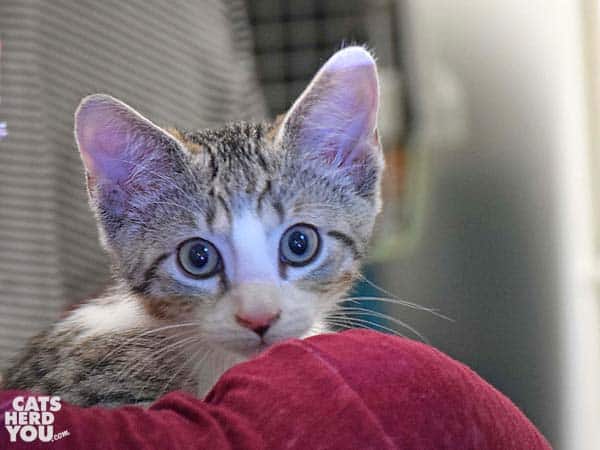 The kittens were in great demand, and big props to the foster families who had prepared these kittens for meeting new people in unusual situations. The kittens did really well, even when they were in the hands of complete strangers. 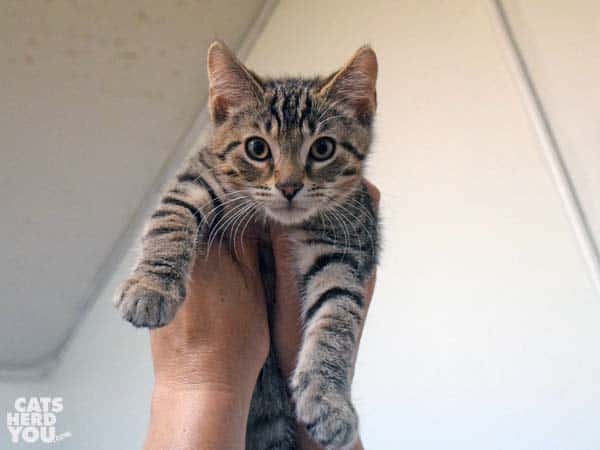 Some of the juvenile cats were in a mesh tent, like this one. I later heard from Candy Sullivan, founder of Candy’s Cats, that this kitty had originally been found in a ditch with a broken leg, and she had a pin in her leg. 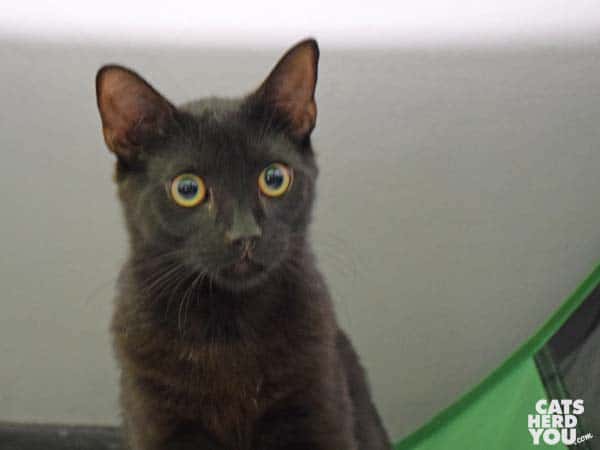 I think this may have been the handsome gentleman kitty I met in the carrier outside the cafe. He was pretty relaxed, but he wasn’t offering himself to be grabbed and passed around the way the kittens were. 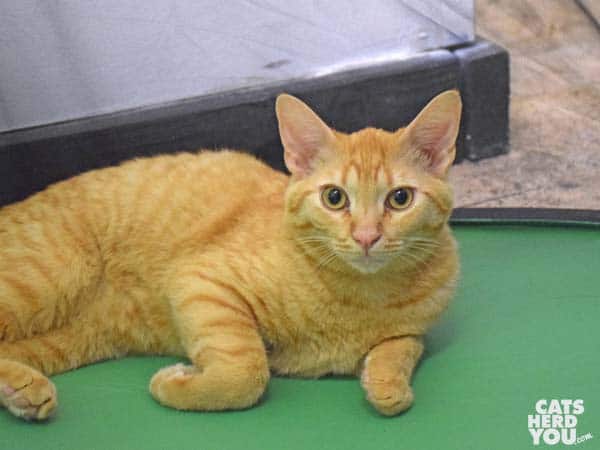 This kitty was a little larger than the others, but was very friendly with everyone! 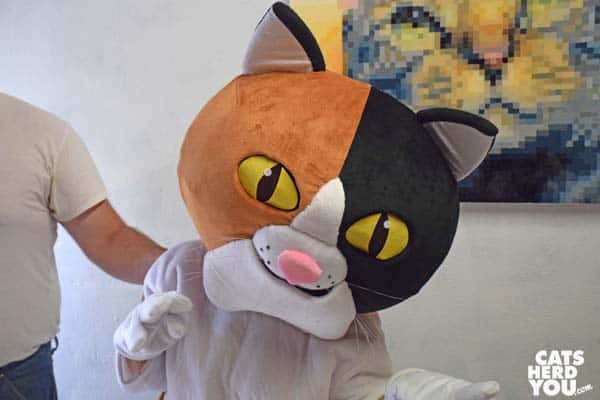 After spending a while visiting with new friends in the crowded cafe, I left to allow in some of the people who were waiting patiently on the sidewalk for their chance to go inside.  Having such a strong interest in a fundraiser for the yet-to-be-completed cat cafe seemed like a very good sign that it will have a lot of support when it is completed and starts having things like yoga nights.

I’m looking forward to The Kitty Beautiful’s planned opening sometime this summer and will pay them a visit again to check in!