You are here: Home / Reviews / The Slow Eater, the Food Thief, and the Surefeed Microchip Pet Feeder

Ever since Pierre decided he didn’t want to eat in the bathroom where he had eaten most of his life, we’ve had a problem: Ashton wants her food and his, too. She will hurriedly eat her own food, and then nudge Pierre out of the way to eat his meal. Once Ashton had pushed Pierre off of his food, he was reluctant to start eating again for fear that she was going to ambush him again. So every meal meant someone had to stand over Pierre to protect his food from Ashton. The idea of having a cat bowl that only let Pierre eat from it and refused Ashton’s advances was very appealing!

The SureFeed microchip feeder looks like something out of Star Trek, with angled plastic side pieces that support a bar that goes over the top of the cat, reading the cat’s microchip to see if he is permitted to eat there. The feeder ships with a tag you can put on your cat’s collar to serve as their personal identifier to the SureFeed if your cat isn’t microchipped.

The feeder also comes with a pair of bowls. One bowl has a divider in it, and the other is a single compartment. The bowl is nearly 5 x 7″ so it is plenty wide to avoid whisker stress. There is a rubber lip around the top edge of each bowl that meets the top of the feeder when it is closed to help keep food fresh. The bowls are plastic, and I was a little disappointed that they aren’t ceramic. I’m looking for a ceramic or stainless bowl in a similar size now to use until the company manufactures them for the feeder.  UPDATE Februrary 2016: There is a stoneware oval bowl from Petrageous that fits well as a replacement for the original plastic bowl. A bonus is that it’s microwave-safe, so I can heat Pierre’s food a few seconds in the microwave to stimulate him to eat on his finicky days without having to dirty an extra bowl.

If want to color coordinate your cat feeder with your decor, you can get additional colors of bowls and matching mats to go in the area where your cat puts his front paws. I can see the colors helpful if you have two feeders and want to be able to tell which is for which cat.

Setting up the feeder was really easy. You start by putting in four C batteries, which the company says will last six months. The batteries in my feeder are at about six weeks and going strong.

To teach the feeder your cat’s microchip, press the learning button on the back and toss some treats into the bowl. The feeder locks in the open position, and the cat who puts his head into the bowl to take the treats has his microchip read and is recorded as an authorized cat. It’s that easy. The sensor is fairly strong. Pierre’s microchip has migrated so the chip is actually over his shoulder blade instead of being between his shoulder blades, but the SureFeed had no problem reading it.

Once the cat is authorized, the feeder has a series of training settings designed to allow your cat to get used to the idea of a moving door over their food. On the beginner setting, the feeder is essentially locked in an open position, but the door twitches a little bit when the cat puts his head in to eat. In the medium and advanced training settings, the door closes partially over the food. In this photo, Pierre is approaching the SureFeed on one of its training settings, so the bowl is partially opened even before his chip triggers it. 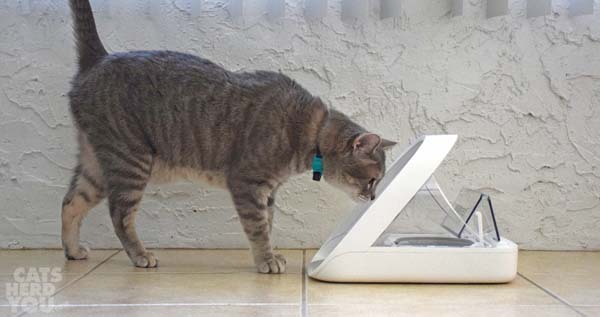 Pierre graduated surprisingly quickly through the training levels, and soon he was confidently approaching a completely closed feeder, knowing that putting his head under the bar would cause it to open. Within a week, he could eat unsupervised without someone having to stand over him and make sure Ashton didn’t steal his food. 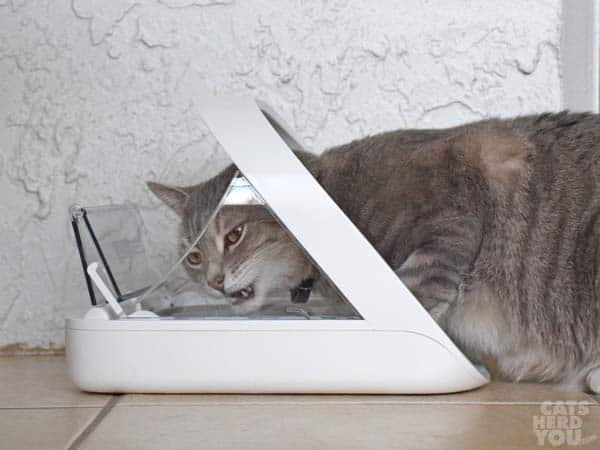 It’s so much easier to manage my hectic mornings when I don’t have to stand over Pierre for however long it takes him to finish eating. I know that his food is safe from Ashton’s intrusion. Just watch:

(If the video doesn’t display here for you, you can visit it directly on YouTube)

That video was recorded the second or third week we were testing the SureFeed. After six weeks, Ashton doesn’t even bother to crowd Pierre while he eats any more. She has learned that it isn’t going to get her any food even if she bullies him into walking away. As far as I know, she only got a bite of food from it once, when I had the feeder set to the longest delay before closing. Pierre had walked away, and lightning-quick, Ashton grabbed one mouthful before it closed on her. I turned down the delay, which is set with a three-position switch on the bottom of the unit, and that hasn’t happened since.

One thing I noticed was that even though my cats are fed only at mealtimes, I would hear Pierre triggering the SureFeed door at various times during the day. The arm mechanism makes a quiet, mechanical noise when it opens that is audible from my desk in the next room. It reminded me of my own habit of opening the refrigerator to look inside for a snack when I know there aren’t any in there. I knew he was finding it empty, and I worried that it might discourage him from using the feeder at mealtimes. So I leave the feeder in the open position unless there is actually food in it.

Overall, I love the SureFeed. It leaves Pierre less stressed out about having Ashton standing over him through most of his meal, and he finishes his whole meal every time without abandoning it. The SureFeed also frees me up from playing referee between Pierre and Ashton during mealtime. Anything that gives me time back in my day while helping my cats feel less stressed out is a big win for me.

FTC Disclosure: We received our SureFeed feeder at no charge from SureFlap in exchange for our honest review. Receiving free product did not influence anything we say. All opinions expressed on this site are our own.

This post contains affiliate links, which means we receive a small percentage if you make a purchase using the link on this page.