Summertime brings evening activities like fireworks, picnics, and other fun outdoors that stretches into the dark hours, and one of the fun human toys that often come home from these celebrations are glow sticks and glow jewelery. 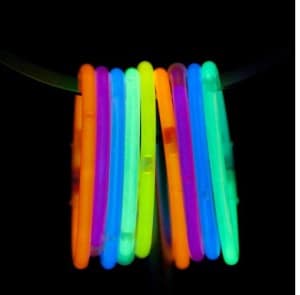 They look like fun cat toys to play with in a darkened room, but they aren’t intended for being bitten or chewed. The glow jewelry or sticks are filled with dibutyl phthalate, and it only takes one bite with sharp, kitty teeth to cause it to leak out.In 2011, the ASPCA Animal Poison Control Center received 315 calls about ingestion of glow jewelry, 82% of them involving cats.

Dibutyl phthalate has a bitter taste, and will cause drooling, gagging, and retching, and even pawing at the mouth. About half of cats who ingest dibutyl phthalate exhibit hyperativity and aggressive behavior. Though the signs of this are especially frightening because of how suddenly they appear, dibutyl phthalate is only considered mild to moderately toxic. However, cats may ingest more of it while grooming and go through the reaction all over again. Its ability to irritate the skin and eyes as well as the terrible taste make it something to avoid.

Additionally, some larger glow sticks contain a glass vial that is broken to activate the liquid’s glowing feature. Biting anything glass or potentially swallowing it makes even the limited toxicity of the glow sticks something to be sure that aren’t punctured by aggressive cats.

Don’t forget that cats who are cord chewers are more likely to chew things like glow jewelry, since the texture and diameter are similar. Children may want to leave their glowing treasures where they can see them at night, but be sure they are placed out of reach of cats who chew when unattended.

If a glow stick is punctured in your house, turn off the lights after cleaning to look for glowing residue so that you are sure you didn’t miss any, or your cat may end up licking dibutyl phthalate from her paws.