You are here: Home / Reviews / Is Your Kitty a Feline Yogi?

Pierre: Kitties, are you feeling tired and out of shape after that 18 hours of sleep? It’s easy to forget you need to get your exercise, too. So I’m going to tell you about how I get my cat yoga on with Feline Yogi yoga mat. 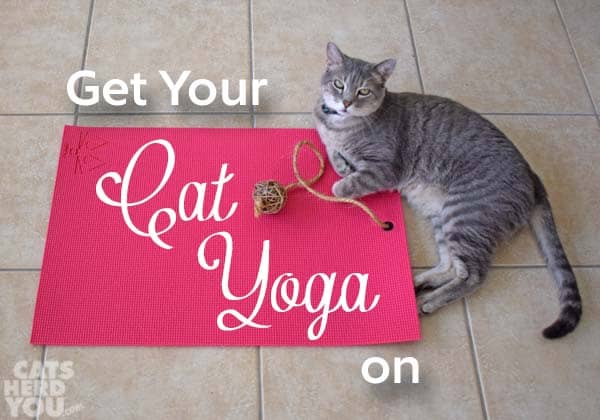 Pierre: The first step is making sure all of your equipment is in good shape so you don’t injure yourself while performing your yoga. This mat is very soft under my elbows as I test the condition of the attached rope. 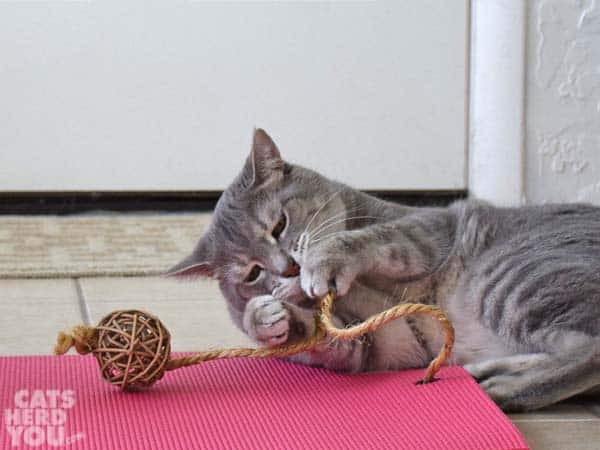 Pierre: I also need to make sure that the catnip inside the twine ball hasn’t lost any of its potency. Oh, yeah, that’s the good stuff right there! I could just sniff this all day. 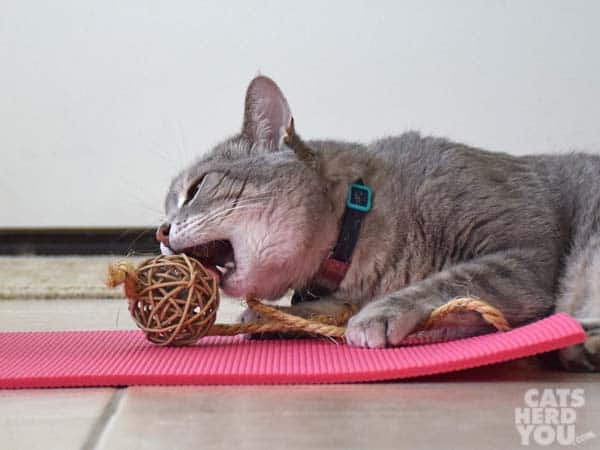 Pierre: I’m showing how I do my yoga exercises.

Newton: Funny, it looked like you were romancing that twine ball.

Pierre: No, I was just testing it while I verified the softness of this mat. 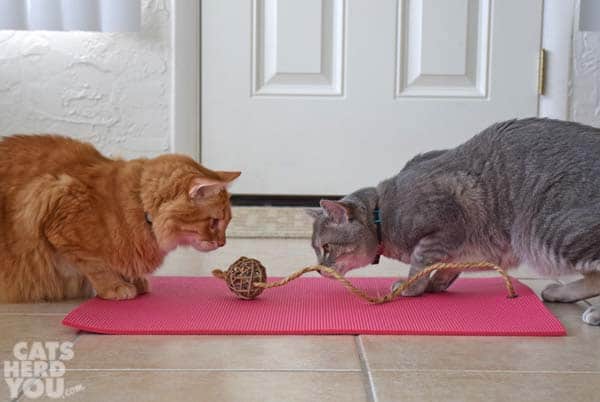 Newton: It’s nice and squishy, all right, and it will be great to get my claws into.

Pierre: No clawing my yoga mat!

Newton: Then I guess you need to show me what to do with it, then. 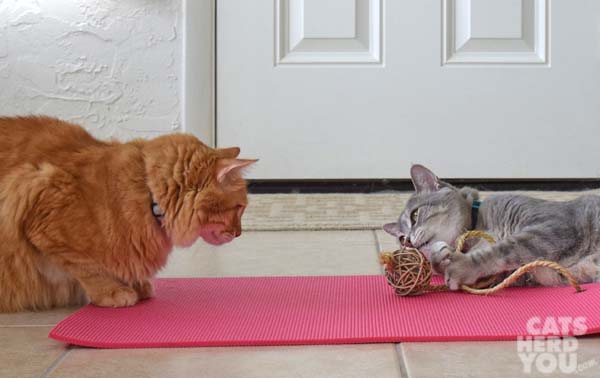 Pierre: All right, I can teach you a little bit. Watch carefully.

Pierre: This pose is called waiting for the mouse.

Newton: But I don’t see a mouse anywhere. 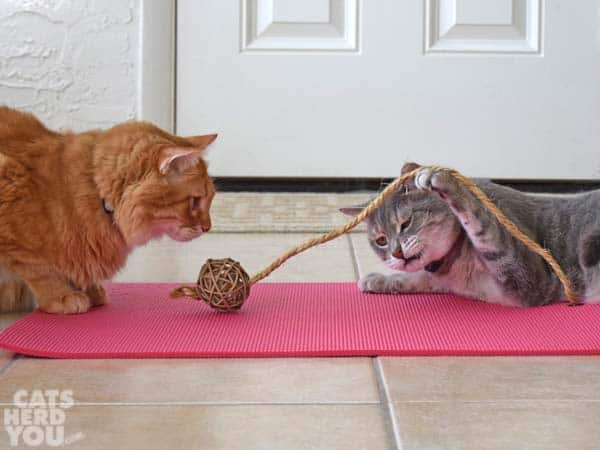 Pierre: This pose is called End of the Mouse.

Newton: But I still don’t see a mouse. 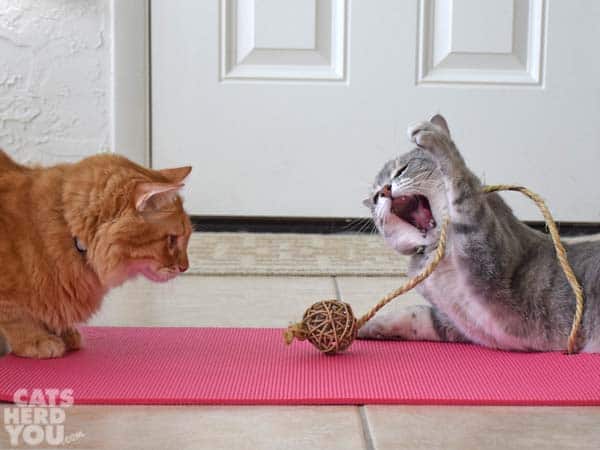 Pierre: * SIGH * I’ll come back to this later when I can concentrate. 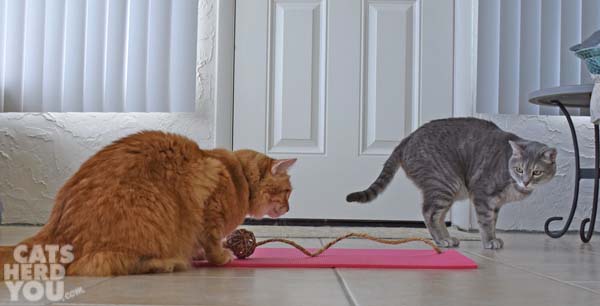 Newton: I call this pose Grabbing the Catnip Twine Ball. Because I can see a catnip tine ball! 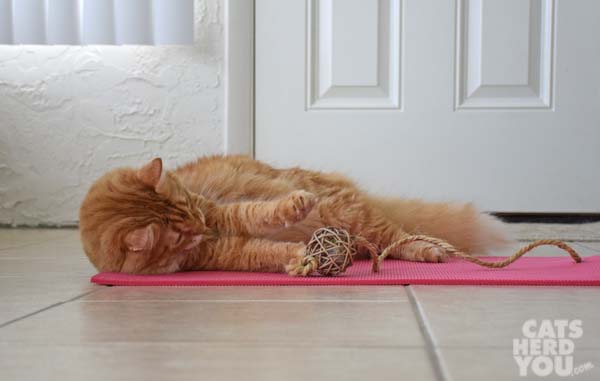 Newton: This is a really comfortable place to hang out. Pierre doesn’t know what he’s missing. 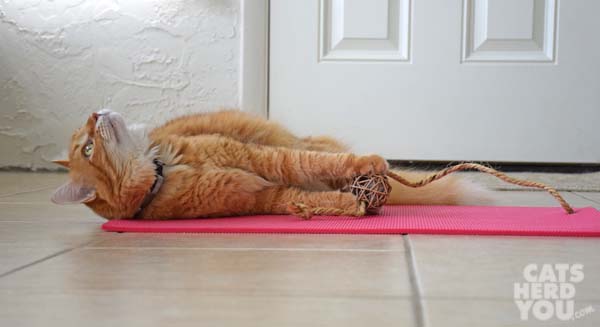 Newton: I don’t understand this yoga thing, but I know what I like… and this kitty yoga mat is pawesome… especially when Pierre isn’t trying to make it all serious. It’s obviously a place for fun. 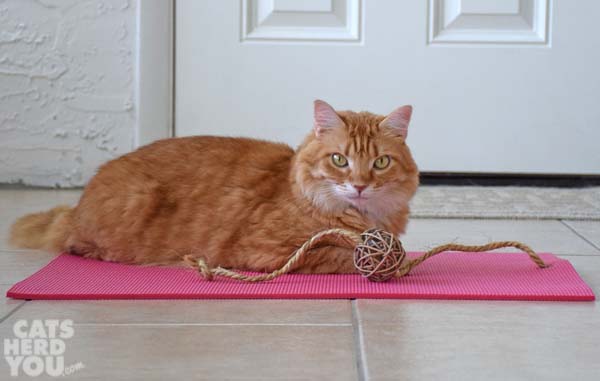 FTC Disclosure: We received yoga mat at no charge in exchange for our honest review. Receiving free product did not influence anything we say. All opinions expressed on this site are our own.