Have you seen the cute clay paw print keepsakes people make for their cats? You can make one with things you probably have already in your house! 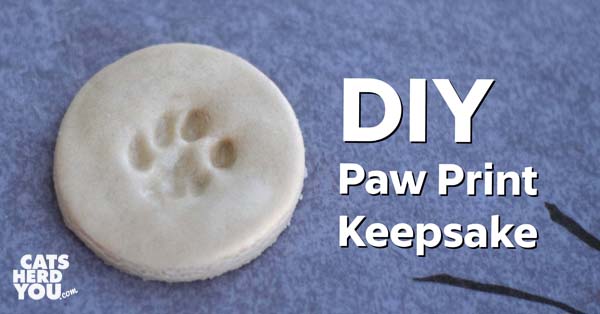 The day I set out to make mine, I wasn’t planning to, so I had to so a little improvisation. So it’s likely you can adapt this to try today.

First, make salt dough. Yes, this is the stuff you may have used when you were a child to do crafts. It is nontoxic and made of three simple, cat-safe ingredients:

Mix all three ingredients together in a bowl and knead the dough with your hands. It takes a few minutes for the ingredients to combine as you knead and stop being sticky. If the dough feels crumbly and won’t hold together after a few minutes, add a teaspoon of water at a time and knead it in. If the dough stays sticky, add a tablespoon of flour at a time and knead it in until you have a nice dough in your bowl. Be patient when adding extra water or flour and make sure it is thoroughly kneaded in before adding more so you don’t overdo it. 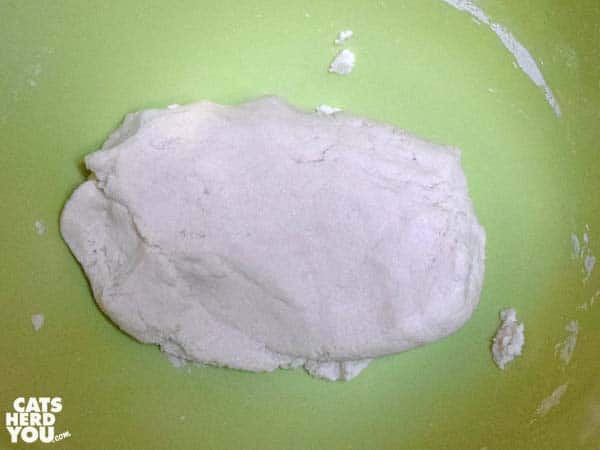 The next step would probably be easier if you have a rolling pin, but I don’t. So I put the dough down on some waxed paper and started patting it carefully flatter and flatter, trying to get to about 1/4 inch thickness. Mine never quite made it that thin.

I then put the waxed paper with the dough somewhere Ashton was familiar with. The whole point of this project was getting her paw print without having to grab her leg, so I chose to put the dough on my desk, a location she visits often.

You can see Ashton already peeking in through the open window to figure out what’s going on. 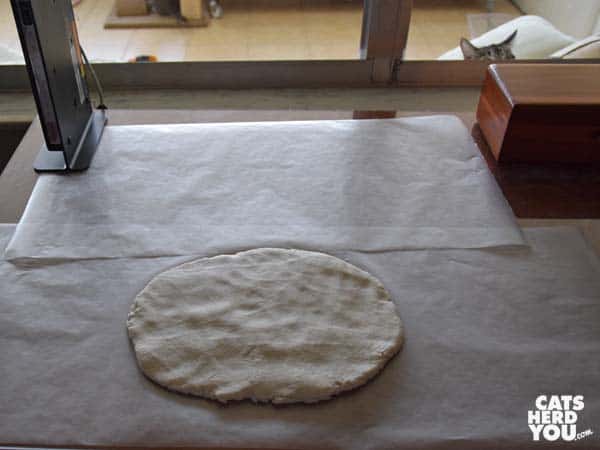 Next, I lured Ashton into walking across the dough. She is notoriously afraid of everything unfamiliar, so I was worried she would leave when she saw the unfamiliar object. Instead, she tasted it! I offered her some cheese to get her to walk across and leave paw prints.

(If you can’t see the video above, you can visit it directly to view.) 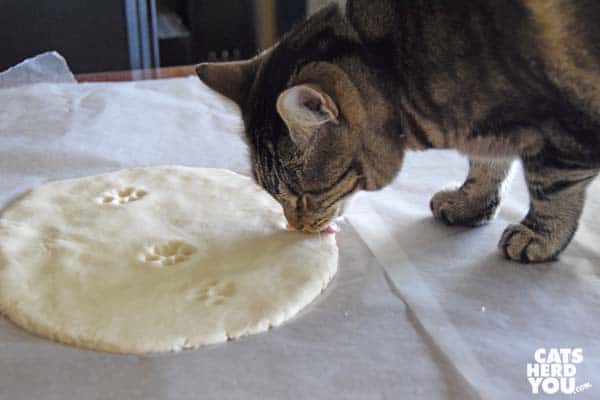 If you like the shape of the dough as a whole, you can keep it as is. I decided I wanted to cut out individual paw prints. Again, since I didn’t plan ahead, I didn’t have cookie cutters, so I used a glass to cut out circles around the dough. Two of the paw prints were too close together for the smallest glass I had on hand, so one of the paw prints turned out off-center. 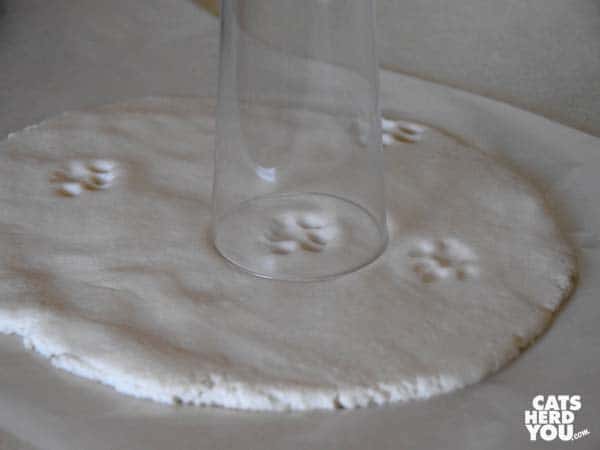 Peel away the unused dough. The dough still soft enough I could have re-formed it into a patty and gotten more paw prints, so a little dough goes a long way!

If you want to hang your keepsakes like ornaments, grab a drinking straw from the kitchen and poke a hole in them now. I didn’t make a hole in mine because I planned to keep it on my desk rather than hanging it up. 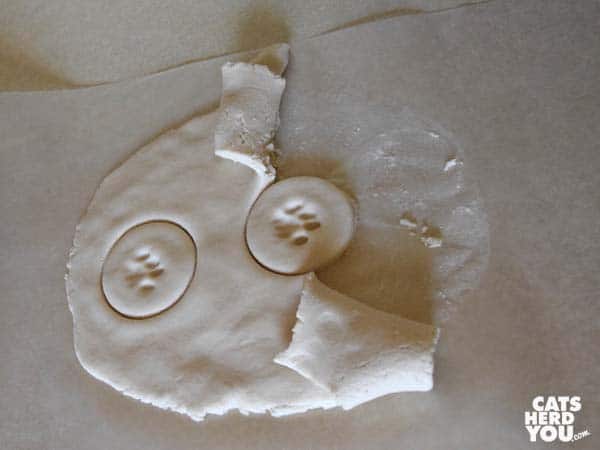 Now it’s time to dry the salt dough. You don’t really bake it, even though it is done in the oven. The idea is to get the moisture out of the dough, not to cook it like a baked good. 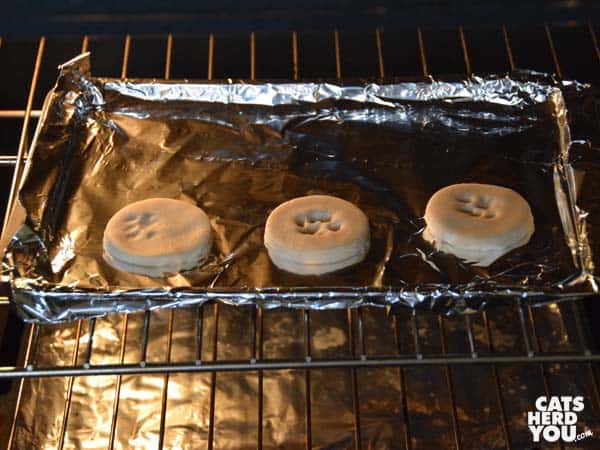 Then I put the cookie sheet with the clay on it into a 200 degree oven. I checked after two hours, but since the dough was thicker than I had originally intended, it was still a little bit soft. I let the oven bake at 200 for another hour, for a total of three hours, and then I turned the oven off and left the house buy some parchment paper and sealant while the dough continued to dry.

Leave the clay somewhere safe to cool completely I used the oven, because Ashton thinks that even the dried dough tastes amazing. 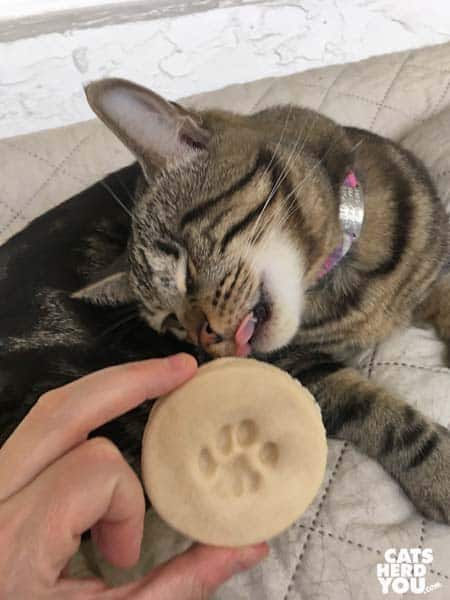 Once the dough was dry and cooled, it was time to seal it. I didn’t sand the edges first, but you can if you want your keepsake to look more polished.

To seal the paw keepsake, I used three heavy coats of clear acrylic spray paint, but you can use anything that will truly seal it. The idea is to keep the moisture out. This isn’t kiln-fired clay, and it will absorb moisture from the environment. That could eventually lead to mold, and you don’t want your paw print to get moldy!

If you don’t have acrylic spray around the house, you can use nearly anything that will cover it completely: 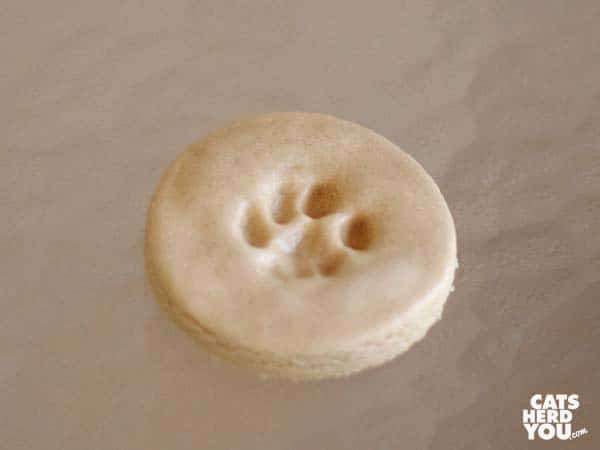 Let your sealant dry completely, and then enjoy your keepsake! 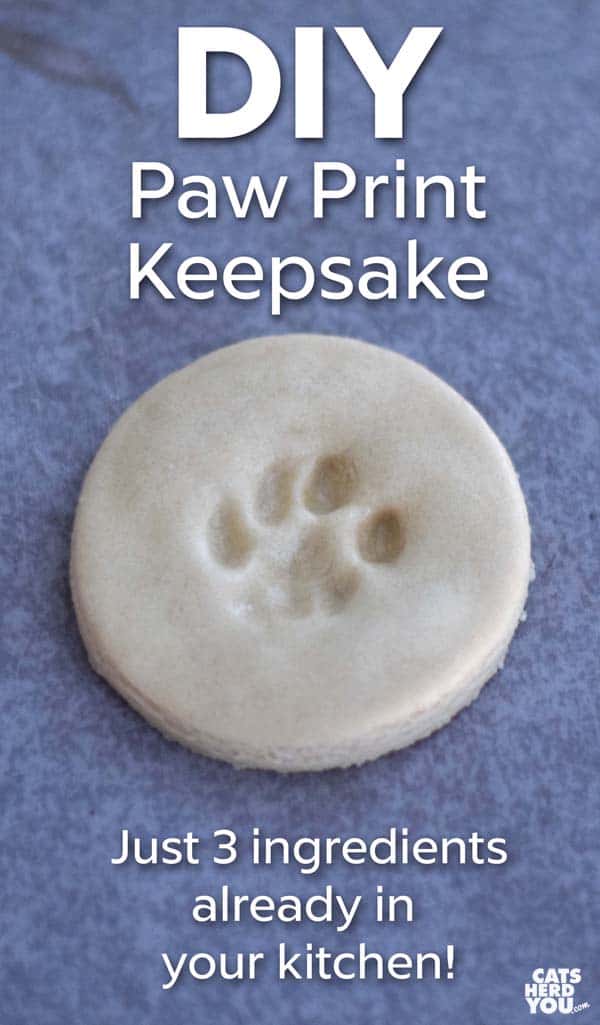