You are here: Home / Tourism / An Amazing Evening with the Acro-Cats

When you see a big, purple bus with cat eyes on the front, it means one thing: The Acro-Cats have come to town!

I last saw them perform two years ago, but this time, but time they were traveling in a different bus, since the previous 1963 model was finally replaced in 2016 through a successful Kickstarter campaign. It’s also a great traveling billboard for the cats. 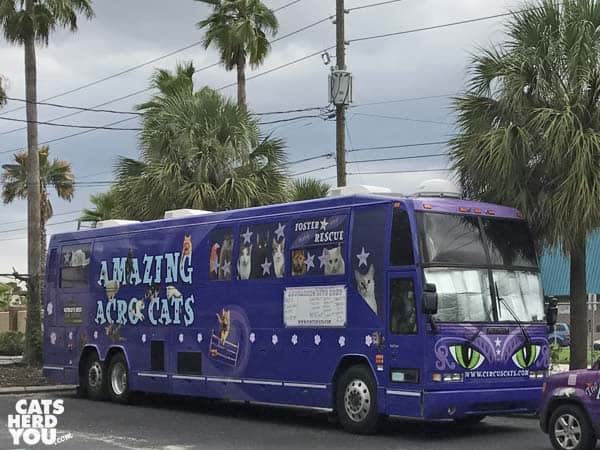 I was excited to hear that the cat circus was finally returning to Orlando, but the most exciting of all was getting to share it with a kitty-loving friend who had never seen them before.

Samantha Martin, an animal trainer, travels the country with her cats, sharing the stories of how the different rescue cats in her group joined her family and show. 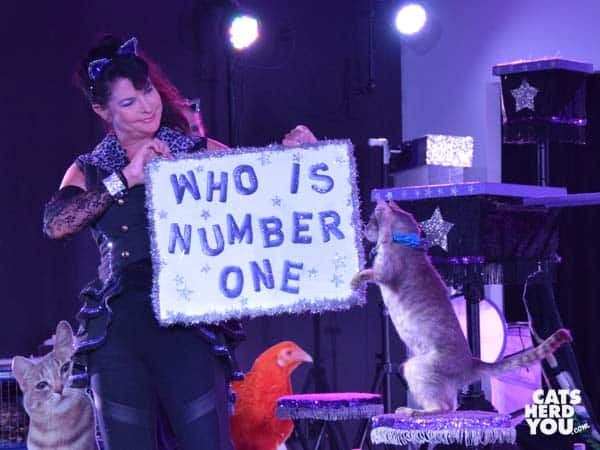 Some cats have mastered cute moves, while others show feats of great feline agility as they climb, balance, or leap through hoops. 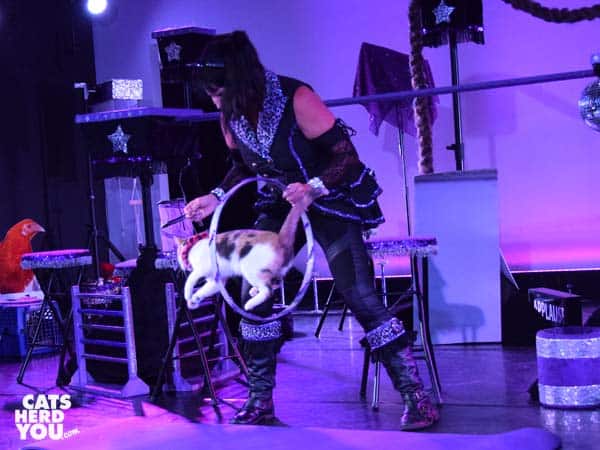 Allie, one of the performers, is a great cat athlete, listed in the Guinness Book of World Records as the longest cat jump: 6 feet! 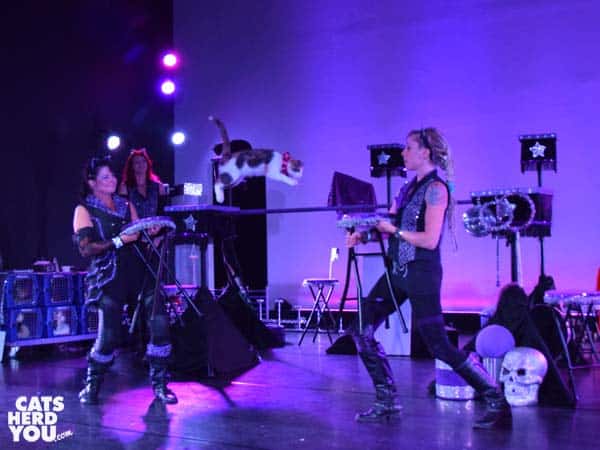 Some of the cats even do very circus-like tricks, like jumping through a hoop whose center is covered in paper. 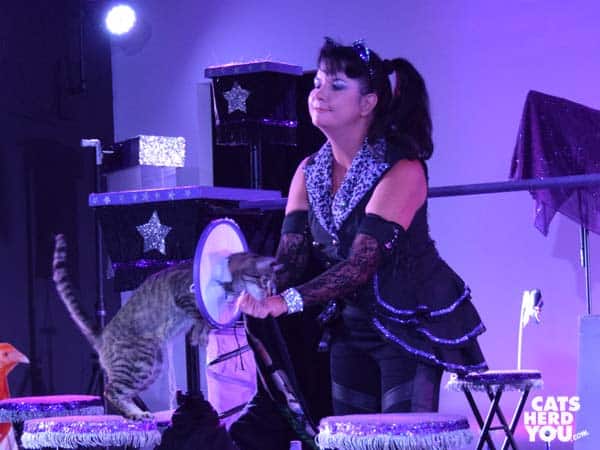 One of the most fun things about the performance is when it doesn’t go quite as planned. As we all know, cats can have their own ideas about what to do and when to do it. At times, the feline performers wander offstage instead of performing. 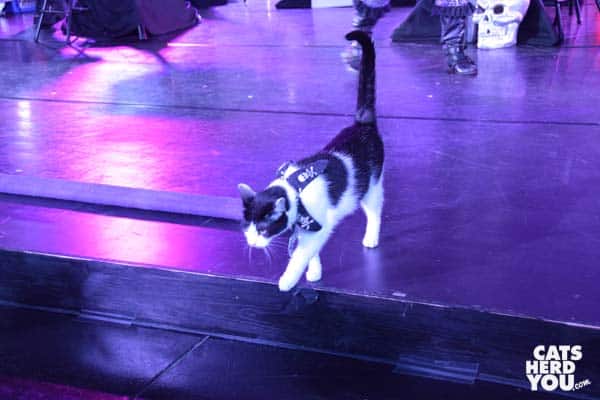 When that happens, the show goes on with the other cats. Once the kitty returns to the stage from walkabout, they return to their jobs of performing. 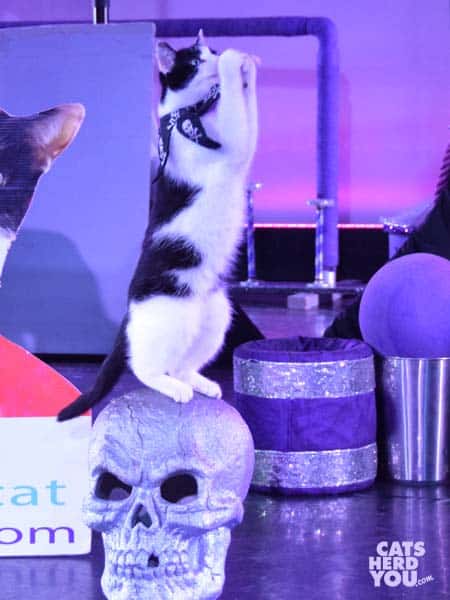 It’s hard to believe how much how much dexterity and concentration these cats have. 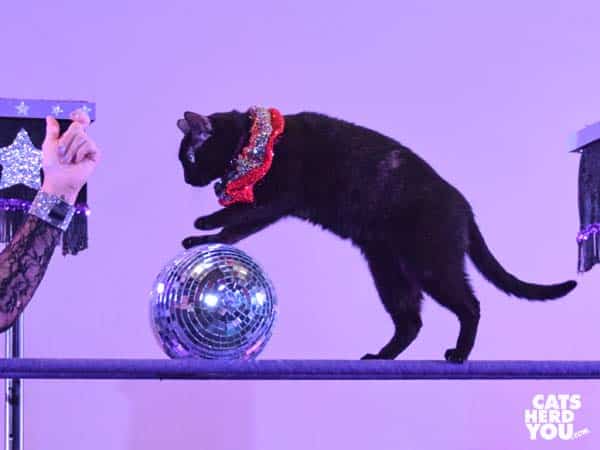 I’m especially impressed that they perform these feats while a roomful of strangers is watching them, often behaving in ways that my cats would find alarming. For example, there was a woman sitting in the front row during our show who gave a horror-movie scream when a cat lost her footing and fell off a stool. My cats wouldn’t have come out from under the bed for an hour if I screamed like that, but the Acro-Cats are confident professionals, and the kitty jumped right back up to to continue.

One of the unique parts of the Acro-Cats show is their  all-cat rock band. It features various cats from the troupe performing on different instruments, like the bell… 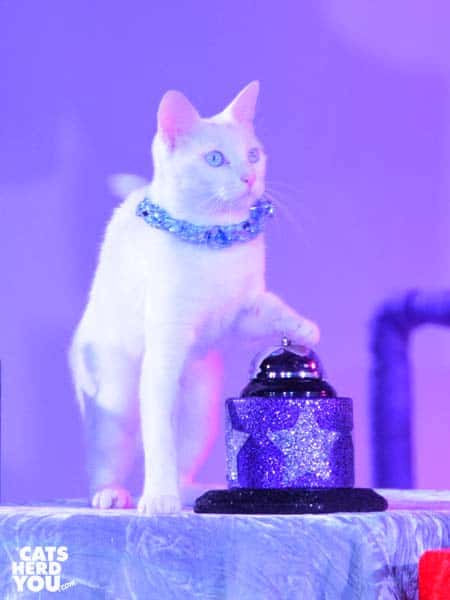 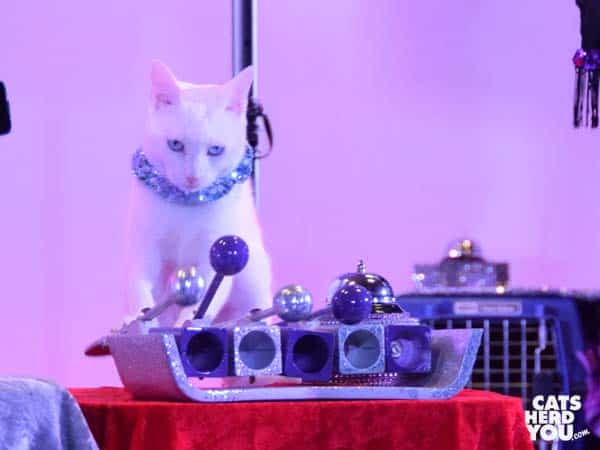 …or the traditional rock band instruments like guitar, drums, piano, and cymbals. Yes, that’s a chicken playing the cymbals. 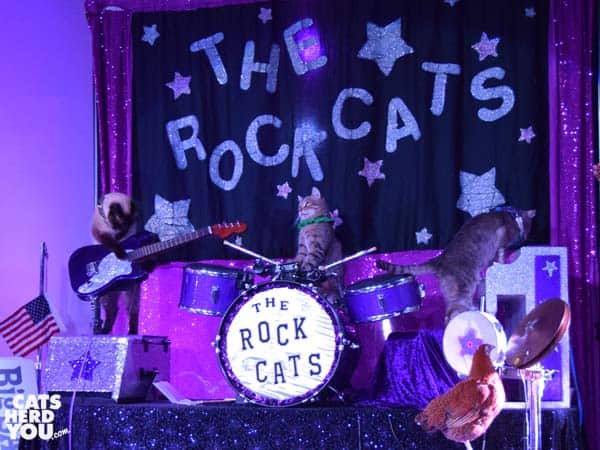 Of course, no band is complete without more cowbell, and they have that, too! 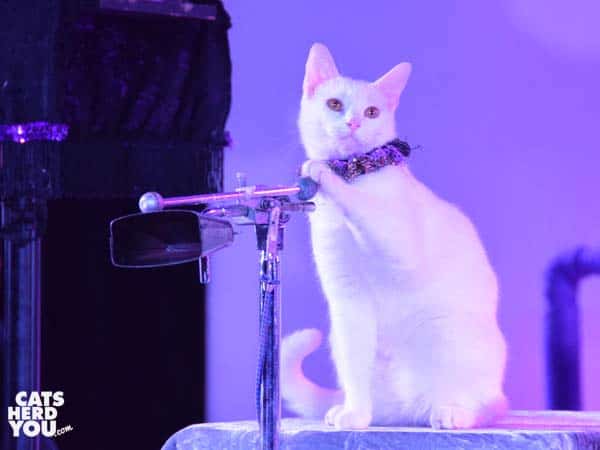 All of the Acro-Cats are rescue kitties, which makes these beautiful kitties extra-special. 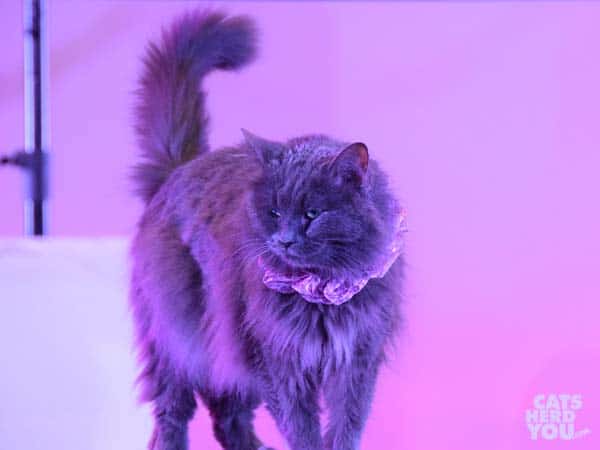 Even more special, as the Acro-Cats travel around the United States, they foster kittens. When the kittens are old enough, they are adopted into loving homes among fans along the way.

While they were in Orlando, the Acro-Cats had two foster kittens with them. One was adopted the first night of the week of shows, and the second continued to make appearances in the show throughout the week. This little kitten was already doing basic tricks like jumping from one chair to another and sitting up on cue.

Look how small she is, and she is already trained to perform. That really is amazing! 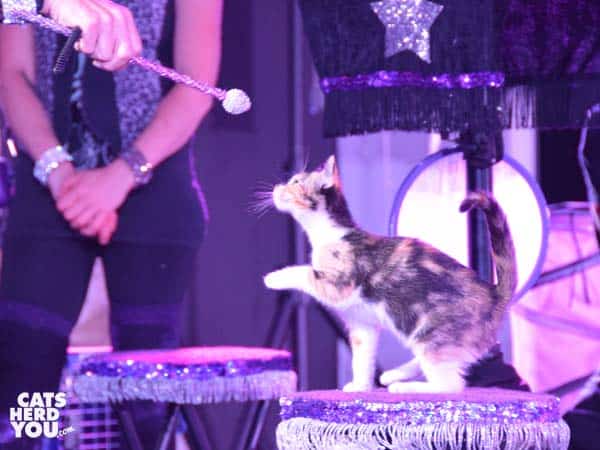 Most of the foster kittens will find their way to loving homes, but a few will stay on with the troupe and become performers who travel themselves. 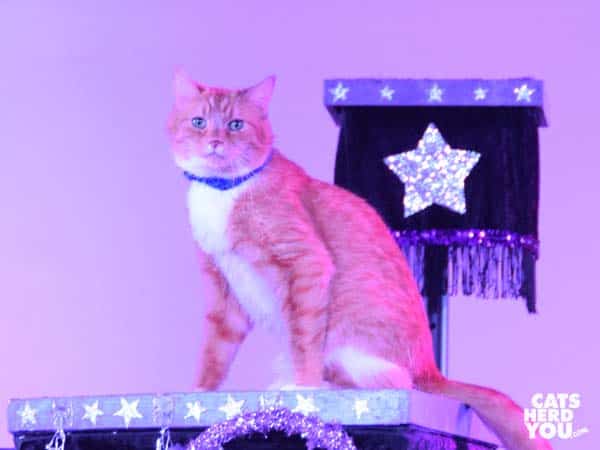 The Acro-Cats bring a wonderful, positive message about how capable cats are of learning and how much it can improve your bond with your cat to learn together. I left the show thinking “I can teach my cats to do that, too!” 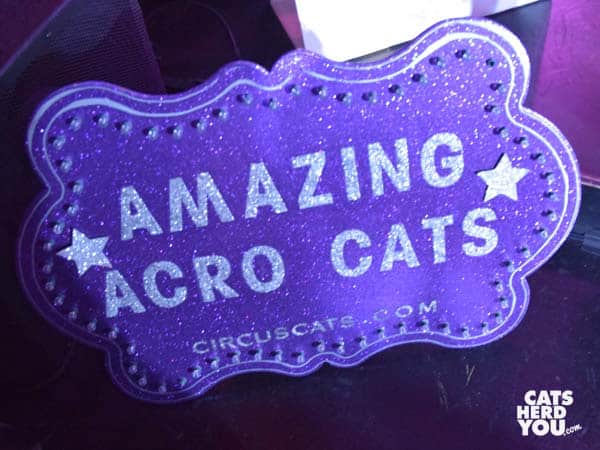